When you think of the Fall 2014 Anime Season, or even the Winter 2015 Anime Season, Parasyte – the maxim – (or Kiseijuu Sei no Kakuritsu) is definitely a series that is heralded as one of the highlights. What’s perhaps most interesting is the fact this beloved and pretty faithful manga adaption by Madhouse, is actually based off a property that is more than 2 decades old. Written  and illustrated by mangaka Hitoshi Iwaaki, Kiseiju is the odd popular manga that ended in 1995 and despite immense popularity, never got an anime or movie adaption. Given how wonderful this adaption turned out in the end, however, I think there’s a case to be made for more manga ending before they get adapted into anime series. 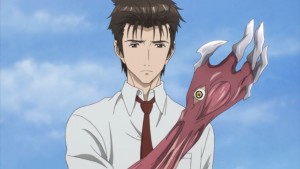 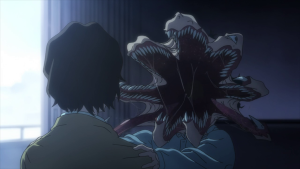 One of the hallmarks of Parasyte, is that its a series that tells a complete, powerful story in an age where anime series seem to serve as glorified advertisements of their source material, whether its a light novel or a manga. Parasyte, is a well paced, solid complete story told in 24 episodes. And a powerful story it is, one that even went as far as to serve as the inspiration for Yoshihiro Togashi’s HunterxHunter Chimera Ant Arc. If that doesn’t clue you in to the amazing dark, intellectual, character driven story that you’re in for, then nothing will.

Parasyte tells the story of a 17 year old teenager Shinichi Izumi. Shinichi’s life is thrown into disarray when a new type parasitic organism is unleashed upon the world in decently large quantities. One of these parasitic organisms attempts to take over Shinichi’s own body, and the ensuing struggle results in the Parasyte taking over his right hand rather than his brain, as it originally intended. Calling it Migi, Shinichi begins his long, painful journey towards adulthood, with a talking, alive right hand in tow. 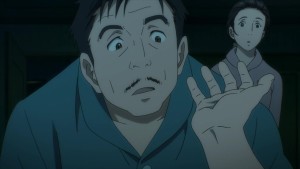 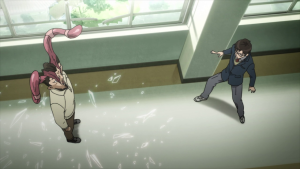 If there’s a definitive way to boil down the essence of the theme in Parasyte, its that its a two-pronged exploration, both a coming of age story and a contemplative look at what it means to be human. This is a series that is classic science fiction, something that’s rarely seen in mainstream but ever present in traditional science fiction literature. The idea of introducing a foreign, fictional element and seeing how humans and society change because of it has long been the bread and butter of the science fiction writer.

What sets Parasyte apart from other science fiction media is not only the uniquely japanese perspective, but the general positive outlook of the series. Make no mistake, this is a dark series, full of death, pain and a decent amount of violence and gore, but the overall message of the series is a positive one. Its easy to liken the series to science fiction horror, but the kind of horror that has the nightmare end, and end on a happy note. 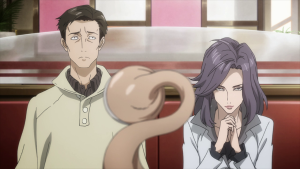 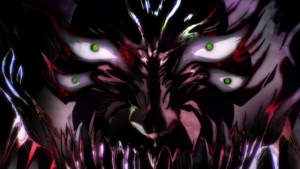 Of course, what makes the happy moments so poignant is that Parasyte is a series that does a great job of not pulling its punches. When characters die, its sudden, unexpected and powerful as a result. No one character feels safe, and early on in the series, there’s a great amount of tragedy that really creates a sense of dread and worry for the rest of the cast. And boy, is this another solid cast of characters. The other reason that Parasyte is such a successful piece of entertainment, is because of how endearing all the characters are.

The dynamic between Migi and Shinchi is definitely the star of the story, as these two entities undergo changes both physically and intellectually because of their unique situation. Its worth mentioning that these characters are really brought to life by the stellar performances of Nobunaga Shimizaki (Shinchi) and Aya Hirano (Migi). Aya Hirano in particular, outdoes herself, giving a very distinct, intellectual but still human voice to Migi, its definitely one of her best performances to date. 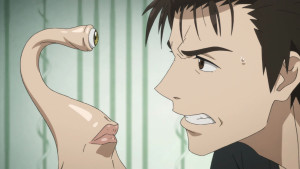 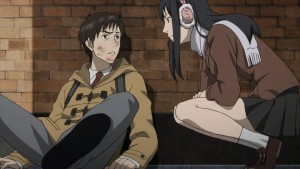 Beyond the core duo, there’s a great bunch of villains and supporting characters that are littered throughout the 24 episode runtime. There’s the girl that Shinchi is in love with Murano, A girl that’s drawn to Shinichi’s mysterious nature Kana, A Parasyte named Tamura Reiko who is more of a wildcard in the general struggle between humanity and parasytes, and much much more. Revealing and discussing the characters and their roles in the story is perhaps taking out most of the fun and thrill, so I’ll relent from doing too much of that. Just know that there’s a slew of great characters that are introduced and have their part to play in this grand drama.

And the drama and story of Parasyte is definitely great, but in the same vein as a lot of other classic science fiction literature, the questions that the series tackles is more around the core themes its explores, and less on its science fiction setting and the mysteries created by it. If there’s a flaw of sorts, its that Parasyte throws out the larger world building mysteries, such as the origin of the parasites or the larger conflict between humanity and this new organism to the wayside. Parasyte is more interested in contemplating concepts like the meaning of life, and the role of humanity on earth, and its because it focuses on those questions that its probably as good as it is. 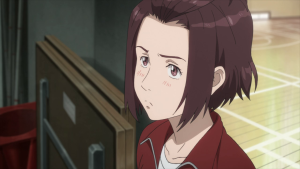 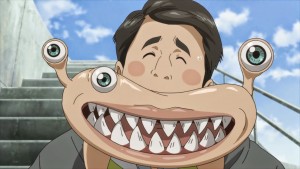 I mentioned the voice acting a bit before, but it must be said that its pretty great beyond the two main characters. There’s a ton of distinctive voice work done for the series, touching upon a bunch of different japanese accents and dialects. What’s truly impressive though, is how the various seiyuu tackle the non-human, parasyte characters. Kazuhiko Inoue as the menacing Gotou, or Murase Ayumu as “Parasite” are just two examples of some stellar voice acting. Series heroine of sorts Satomi Murano is also done exceedingly well by Kana Hanzawa.

Its not just the voice work though, nearly all the production of the series is stellar. Its no surprise I suppose, given that its Madhouse at the helm. What’s most interesting though, is Kenichi Shimizu, who makes his proper director debut with this series. Shimizu has been involved with a few key anime projects as an animator, Monster and Tengen Toppa Gurren Lagann being two stand outs, but his directorial record is pretty bare otherwise. And he not only directed this adaption, but also did the storyboards for it. Kenichi Shimizu might be the new name to keep an eye on. 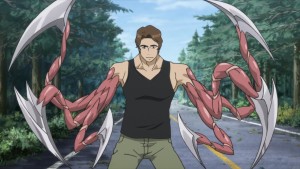 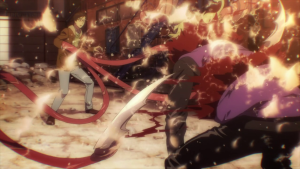 Parasyte is a strong production, with great animation and art direction. The character designs and general look of the series definitely get a contemporary makeover, but its one that feels right at home and in spirit of the original. The animation production for this series is definitely amazing, specifically the various fight scenes and scenes where the Parasites display their more “inhuman” characteristics.

The music and score is pretty great too, with a solid Techno/Trance OST done by Ken Arai. The Opening theme by “Let Me Hear” by band “Fear, and Loathing in Los Vegas” is definitely one of the most memorable opening songs of the year. 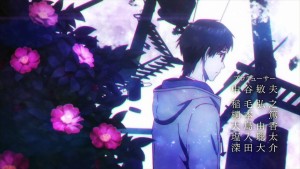 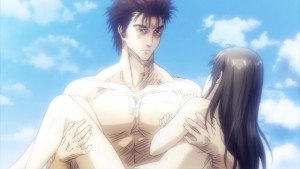 As a whole package, Parasyte is a powerful offering, and one that science fiction fans will definitely enjoy. This is a series best enjoyed by those who like dark and thrilling stories. Its definitely in the senin category in terms of audience. It’s the kind of series that exemplifies the power and storytelling potential of the anime medium. And while its probably not for everyone, it does what it does exceedingly well, in a way that’s rare in the anime industry today. We award it with an A+ for telling a great story from start to finish.