Have to admit I was not expecting the episode this week to touch on the subjects it did, but in retrospect it makes complete sense and also reflects a sort of natural progression of things. Food wise the focus this week was the traditional early autumn meal of charcoal grilled saury fish, and we discover that preparing it is definitely nowhere as easy as one might think. Aside from the food preparation and devouring (in reference to which I am glad the series itself acknowledges that the degree of enjoyment that Ryou, Kirin and Shiina get immersed in when eating food is abnormal) there are very definitely other things going on here.

Last week the content, or the meat of the episodes was harder to see because of how strong the fanservice’y imagery was and how … erm … elusive the core of the episode was to begin with, even without the fanservice element being turned up a notch. But this week things are very clearly spelled out and simple to understand – although perhaps not so easy to grasp for everyone. We also received some interesting glimpses into the other characters. 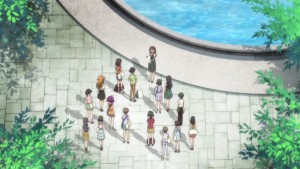 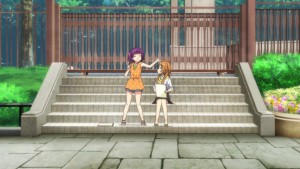 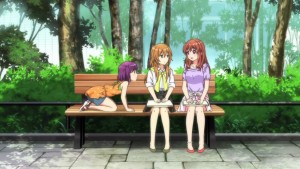 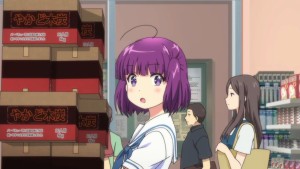 As the episode opens up we discover that it is early autumn season wise, and the little dynamo Kirin is complaining as usual – this time during an outdoor art class and she is griping to Shiina (I guess they had a joint class?) about how autumn cannot decide whether it is hot or cold. While this was going on, by the way, we are given a brief glimpse of Ryou’s sketching abilities – we know that she is a talented cook, but as we are reminded again she is quite a talented artist as well, something I personally sometimes forget since her cooking skills are so often in the spotlight.

I did not quite get Kirin’s complaints myself (I love the season of Fall), but in any event Shiina gets that Kirin wants to do something and decides to do something directly for Ryou. She invites Ryou and Kirin over to her house and says (to Kirin’s surprise and uneasiness) that she and Kirin will cook the food for Ryou. At first hesitant, Kirin suddenly eagerly agrees. It was in Ryou’s reaction to this offer that we got the first hints of the episodes contents; Ryou was completely surprised at Shiina’s words – it was almost as if such a possibility had never entered into her head. While surprised the intellectual reason she gives was that she thought Shiina and Kirin did not like to cook, but it was obvious something else was going on there. She even mentions that she would feel a little left out.

Before I go on to the next section I should mention that the scene of Shiina and Kirin shopping together was one of the most revealing of them. Both show that they are clued into and aware of Ryou more than one might expect. Shiina has noticed that Ryou had been down a bit of late, and the invitation was especially to cheer her up. Kirin (whom we are surprisingly shown to be immensely strong, carrying around 210 pounds worth of charcoal without showing any effort whatsoever and chatting away all the while!) however, since she spends a lot of time of Ryou in a living situation and sees other sides of her Shiina might not normally, brings up a different concern. The Obon festival has recently passed when the dead are remembered, and she fears that the memory of her grandmother passing on has weighed Ryou down with sadness. Kirin also says an interesting thing; that she wishes Ryou would tell her when she felt lonely. 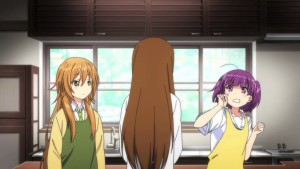 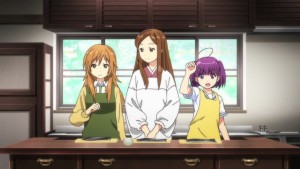 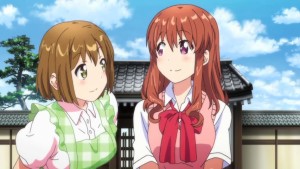 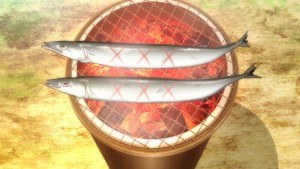 It turns out that even though Shiina and Kirin have zero cooking skills it is the house maid Tsuyuko (who happens to possess cooking skills at an internationally recognized level!) who will be guiding them in the process of preparing the charcoal-grilled saury. So Kirin arrives early at the mansion to help prepare the meal for Ryou and tells the latter to arrive at four in the afternoon. Unsurprisingly we are shown shots of the mansion that have cats lounging all over the place from time to time – they have become used to visiting the place at that time of year as Shiina’s relatives always send her loads of saury and there are never enough people to eat what they cook. We see very quickly that Shiina and Kirin were not lying when they mentioned they were not skilled in the kitchen. They are not. The entire time they are in the kitchen they try their best but generally it is fraught with the disasters one might expect from beginners or those a bit worse.

Ryou the meanwhile is having a terrible time waiting, and is showing much more unease than she usually does. Finally she cannot wait any longer and arrives at the mansion early, where she is greeted by Shiina’s mother (hard at work amongst the vegetable gardens) and later encounter the maid Tsuyuko on her way back to the kitchen with the herbs she has freshly picked. Tsuyuko shows Ryou the rest of the way, and we are given a brief and extremely revealing interchange between the two, showing Tsuyuko’s insight and sharp eye. Essentially she encourages Ryou to let other people do things for her, to let herself rely on others, and to let others show her their gratitude. When Ryou hears this unexpected information you can see that she is open to the idea but does not really have a folder to put the information in. 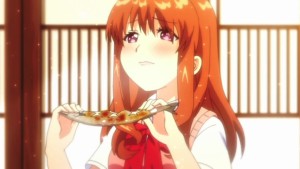 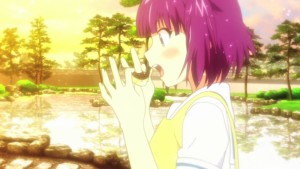 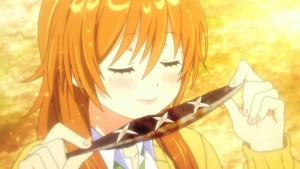 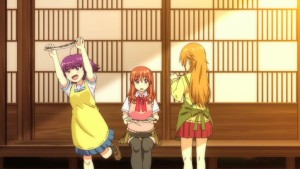 From there the episode finally shows Shiina and Kirin finishing their first batch of fish and happily sharing it with Ryou, who eats some, is delighted, and then happily shares it with the others as well. She ponders to herself that while it is true that eating with those you love and cook for makes the food taste good, the food that those you love cook for you tastes even better … something one would think would be easy to remember growing up with her grandmother, but which has been allowed to be forgotten or misted over with time.

Shortly after when Shiina and Kirin are trying their hand again at grilling another batch she and Tsuyuko have a chat and Ryou tells her of the conclusions she has come to after that experience, which were even more revealing for me. Ryou says that “the flavor of the food made her feel grateful and indebted all at the same time”. One might look at this on the surface and even be impressed that someone could have such a sensitive and full hearted reaction to someone showing them kindness like that. But Tsuyuko deftly cuts through the conclusion with blinding speed and says that that is not what you should take away from their kindness. What you should take away from the experience is the practical awareness that you can lean of the others more, you can rely on them more. 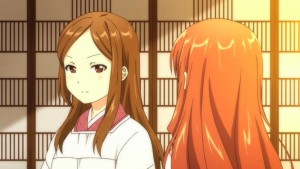 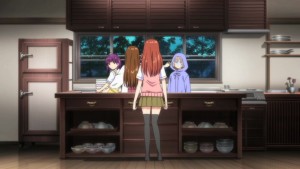 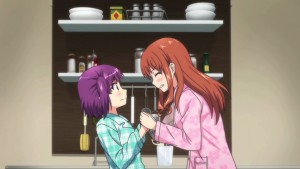 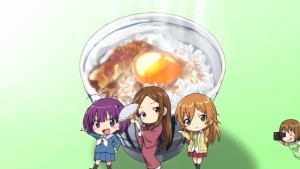 It is obvious to me that the direction Tsuyuko pointed towards, while received and considered very strongly by Ryou, may be a difficult one and take some time to apply it to her life, even if it may be one of the things she needs (and perhaps even desires) the most at this point in her life. After her grandmother died the need arose to become responsible and care for herself, but unsurprisingly she may have become a little too self-reliant, or perhaps quickly grew to be self-reliant in a way that slowly began to cut off her ability to let others help her in her time of need, buttressing such an approach to life with “reasonable logic” and the like (such as the earlier comments about assuming Shiina and Kirin did not like to cook).

In cases like this the self-reliance became an occasion for closing herself off from others to a degree rather than being a starting point from which one can step forward and share her skills, kindness and love for others. Love, true love, after all, is reciprocal. It is a give and take, yes, but it also involves a being willing to give selflessly and receive selflessly, with the action of going out to others and being receptive to others being equally healthy and devoid of occasions of closing oneself off. One of the reasons this can be especially difficult is because it can be scary to not “be in control”, or to show vulnerability, or even humiliating to show weakness or dependence in certain areas. All of these, though, must be in a goodly balance – something which the maid Tsuyuko apparently has experienced and understood … and was able to help give Ryou a little nudge in the right direction towards.