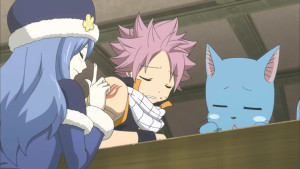 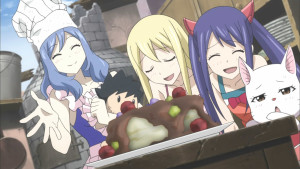 And… Its still better than the filler arc! This is the second week now that we’ve gotten a small self contained story, and I found myself still pretty engaged and generally having a good time. Leave it to Fairy Tail to go against expectations and actually deliver some pretty decent filler episodes when its not too concerned with trying to make a big overarching story. 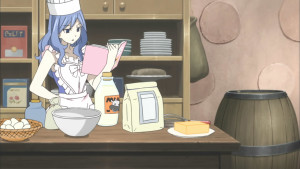 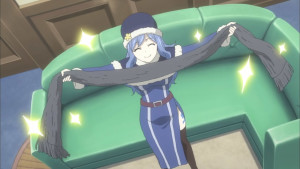 I think there are two levels of good, One where you barely notice the episode go by, and wonder where those 24 minutes. The second type, is the one where you’re just having a nice, relaxing time seeing where things go, and that’s where this week’s Juvia centric episode went.

Maybe this episode isn’t one for everyone, but I think the reason I found a pretty good deal of enjoyment is that it focused on the quirkyness and the heart of the Fairy Tail Mages that we’ve grown to love so much. 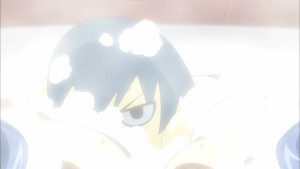 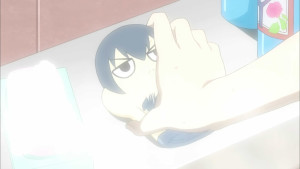 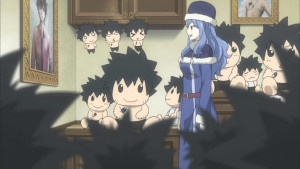 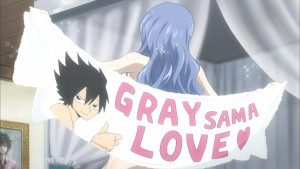 Yes Juvia’s whole obsession with Gray is a little out of hand. Actually… scratch that, its pretty out of hand. Beyond the fact that Juvia has waaay too many dolls of Gray in her room, she even has a soap that looks like him. And of course, then there’s the fact that she’s literally counting the days since she met Gray, which total to around 413 now. Which means, removing that 7 year gap, Only about a year has passed since Gajeel and Juvia tussled with Fairy Tail. 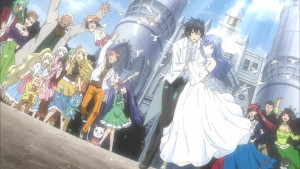 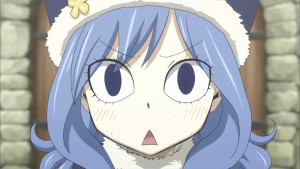 Juvia and Gray is one of the most frustrating couples to ship, especially since its mostly a hang up on Gray’s side, with Juvia going above and beyond for the guy. And while its easy to just hate on Gray for being so cold to Juvia, he’s clearly got issues after having lost both Ul and Ultear.What was perhaps, most fitting about this episode is that it brought both of those aspects front and center. There’s the fact that Gray clearly does like Juvia, even if just a bit. At the same time, he’s clearly too afraid to feel vulnerable again and care for someone, lest he lose them again. Juvia’s definitely dedicated though, so I’m sure its a matter of time before she breaks the icey shell that Gray has immersed himself in (see what I did there? Eh? EEEEH? XD).

I do think that sometimes her positivity does work against her. The dakimakura at the end…. Oh God. XDBeyond that though, it was pretty heartbreaking to see what happened after she spent a good chunk of the episode stressing over a gift for Gray, only to find out that the day she was most excited about, was the death anniversary of Ul. Still I think the gift of a scarf, Gray colored, was pretty nice as a gift, and really played to her strengths. 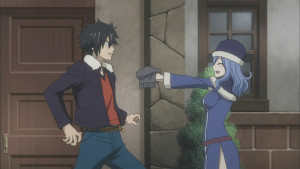 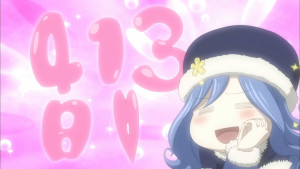 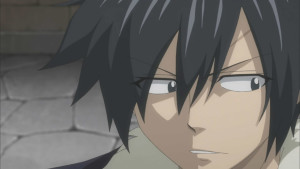 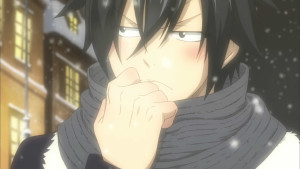 While Its hard to approve of how Gray treated Juvia at first when he was presented it, its definitely understandable. And what I liked in the end, was that he realized the importance of the gift, and ended up finding it again. I’d have liked him to actually go and you know… Thank Juvia who was busy crushing herself, but I guess that’s asking too much at this point.
The other thing that I really liked was how much of a big sister Erza was to Juvia. Erza’s often labeled as the super strong air headed female, but I think in the matters of the heart, she’s pretty smart. 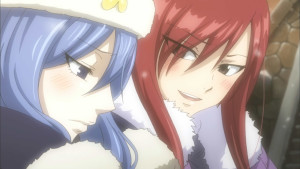 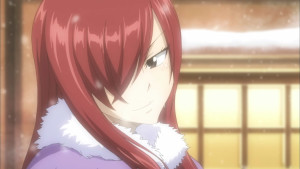 I like how she’s slowly guiding Gray and Juvia to get closer to each other. She did it during the last major arc too, when she talked about the whole Juvia thing with Gray During the Grand Magic Games. And as a side note, it was exceedingly funny to see Juvia’s “love mode” brain go into overdrive and tease all the couples for the rest of Fairy Tail. I’ll say this, The anime production stuff definitely knows how to tease the fans about the romance in the franchise. 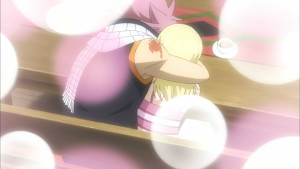 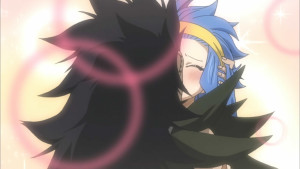 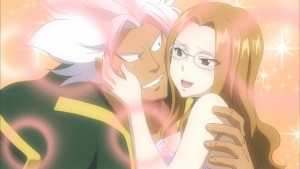 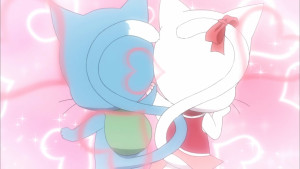 Looking at the episode as a whole, its definitely worth noting that not a lot of new ground was tread here. Yet, I’m getting pretty comfortable with these a “Day in the life of Fairy Tail” centric episodes. If someone wanted to do a slice of life/romance show set in the Fairy Tail universe, oh man, would I bite.And yes, while its nothing to write home about, its still another episode that I had fun watching from start to finish. Until the next major manga arc, that’s all I could ask for.

Oh and since this was a Juvia centric episode, Of course, the ED theme featured a Juvia Centric fanservice artwork. 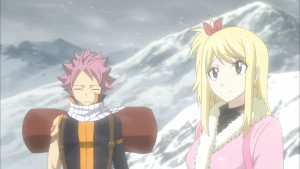 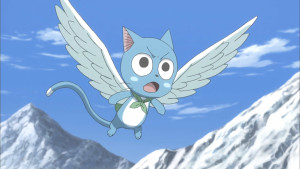 We have a Natsu, Lucy and Happy centric episode next week? Sounds good to me! XD