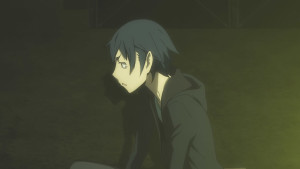 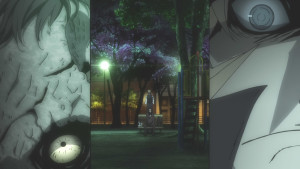 Its taken about 6 weeks, but I’m finally on the Durarara!!x2 bandwagon, if you can call it that.

Calling myself a fan of the franchise is a bit of an understatement, as the series is very near and dear to my heart for a variety of reasons. The first is, obviously, that Durarara!! was the first series that I ever blogged from start to finish, and which really kicked off Anime Evo as a serious endeavor for me.

Durarara!! Originally aired in 2010, so its a good five years after the first series that we’ve gotten a sequel. It came as a surprise to be honest, especially given how Baccano! (another great series based off the same Light Novel Author’s work) never really got a second season. 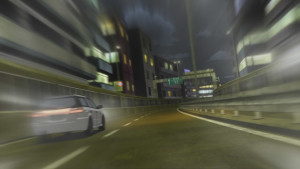 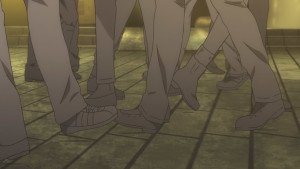 What I think made Durarara!! the exception, was that the story just hit all cylinders from episode one. I distinctly remember commenting on how good the balance of content was per episode. Even more so, what I appreciated about Durarara!! was the fact that the series introduced interesting premises and mysteries and provided their conclusions quickly before moving on to the next bunch of stuff.

Of course, that was when the story was still in its infancy and when all the major characters were still being introduced, and their roles in the unique dynamic of Ikebukuro were yet to be revealed. 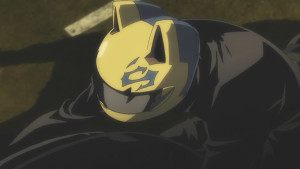 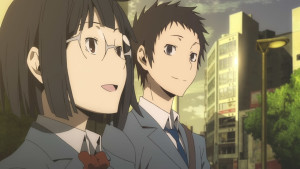 Now, 5 years later, Durarara!! x2 is in a very different place both in terms of story, and just generally. For one thing, I don’t think Durarara!!x2 would have ever gotten off the ground had it not been for the very creation of Studio Shuka. The fact that a bunch of ex-Brain’s Base talent (still one of my favorite studios) went on to create their own studio and then tackle Durarara!!x2 as their first project, speaks volumes about their confidence in the source material.

The other cool thing, from a production stand point, is that Durarara!!x2 has a confirmed 3 cours. That means, at the very least, we’re in for a series that is 12-13 episodes longer than the first series, although its very likely that there will be some breaks/gaps inbetween each cour. The three seasons are called Shou, Ten and Ketsu, which is a pretty interesting naming convention in itself. (For simplicity’s sake though, I’ll stick to calling the series Durarara!!x2)

So given that I’ve spent a good 6 paragraphs mearly explaining my excitement about the fact that there’s more Durarara!! available, its worth mentioning how I felt about the first six episodes of the series.

From a narrative perspective, Durarara!!x2 starts in a bit of a tough spot. The big issue, is that it picks up from a point where things have kind of slowed down for all the characters. The first four episodes, in particular,  are a kind of “welcome back to Ikebukuro” and the normal dose of crazy that comes with it. This isn’t bad per say, as anyone who’s seen the first season can more than appreciate seeing their favorite characters back on screen.

There’s even some introductions of a few newer characters, but by and large it feels like nothing of significance happens. 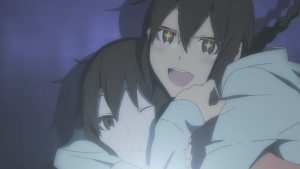 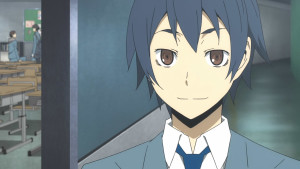 We of course, get a much deeper look at some the characters we briefly saw in episode 25 (the unaired episode from season that was released direct to disc later). The Izaya sisters definitely got a nice, grander introduction. Like I said before, the twin cest still kind of creeps me out, but I think those two sisters are just weird… XD

Speaking of weird, we had Shizou’s actor brother Kasuka make a return, and the robot of a man got his own twisted yandere serial killer soul mate in Hijiribe Yuri. 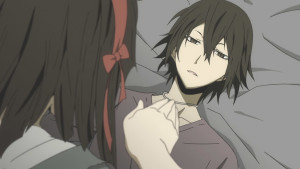 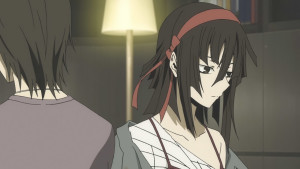 I couldn’t help but feel like this pairing was a bit weird, considering we already have Seji and his girl in this series as the weird couple, but I guess time will tell how the Kasuka x Hijiribe pairing plays out.

We also got a new student character in Aoba Kuronuma, who seems to be part of some rival gang. And speaking of rival gangs, we’ve got a new character that’s the leader of a gang of bikers from Saitama, who also seems to be really obsessed with being a twisted version of a guy who treasures women named Rukujo Chikage. 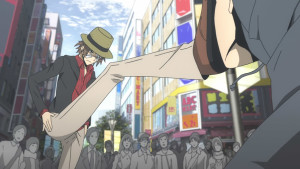 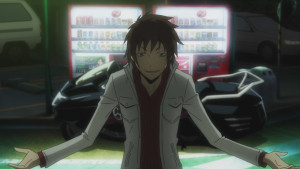 Rukujo was definitely the stand out character of the bunch. Not only did he pick a fight with Shizou but he took 5 punches from that monster. Added to that, the whole “I have a girl waiting for me” thing that Shizou a bit jealous was pretty funny. Rukujo is definitely crazy, but he’s just silly enough with the right combination of redeeming traits and a twisted sense of honor, that he’ll make for an interesting addition.

Despite the introduction of all these characters, however, the first introductory story arc, felt a bit tame honestly. I feel that some of it is because Izaya is mostly out of action at the moment. The other reason could be that Kida is kind of elsewhere at the moment as well, and both of these characters added a good deal of entertainment in the first season. 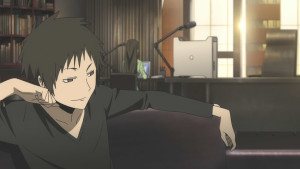 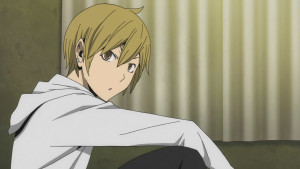 These first four episodes definitely have the trappings of a device for the audience to more or less catch up and find out what’s happened to all the characters since the last series, but its surprising to see that while Durarara!!x2 is good, its not, excellent, exemplary, or stand out.

Don’t get me wrong, the second series is off to a strong, solid start, but it just doesn’t feel like its as special on a per episode basis like the first series, and it would be wrong to admit that it isn’t slightly disappointing. The first arc definitely gets everyone together, and more so, really hits home the idea that everyone really does know one another now. 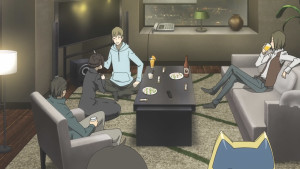 What’s interesting that a lot of the people in the main cast are now members of the Dollars. Celty, for example, being a Dollars member was definitely interesting to learn, and the huge team up between her and team Otaku Van was my favorite bit of the intro arc. But… After that whole sequence, things really start to die down tempo wise, and its really all about a slow build up to things, something that I’ve never really felt with Durarara!! before. 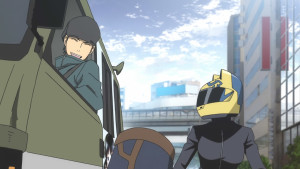 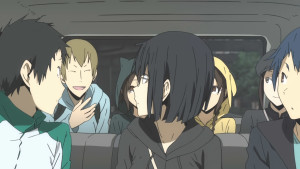 Durarara!! was one of those rare series that kept you engaged and excited throughout, hardly ever feeling like it was building up to something. Exciting things would just kind of happen, most of the time in tandem.

That whole feeling of exciting, intertwining events doesn’t happen in the first four episodes at least. For me, the series really started getting into the groove with episode 5, as we moved into what will probably be the next major arc. Multiple things start happening, to the different individuals in different locations, and of course… its all connected. 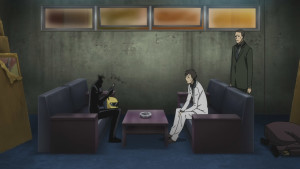 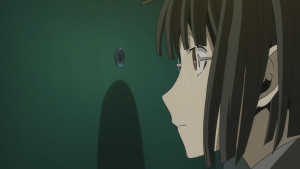 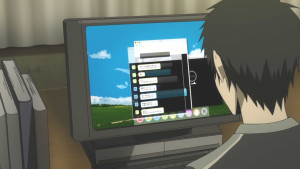 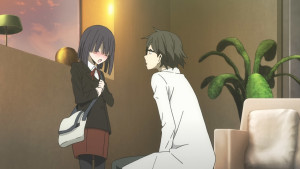 Mikado has his whole issue with the Dollars again (with Izaya, new gang leader Rukujo and even new student Aoba quite related to the whole thing) , Anri is suddenly being targetted for kidnapping, Celty has a job to find a lost kid, and said lost kid is chilling at her apartment with Shizou and Shinra while having a fever… And there’s the two new Assasin’s, one of which seems to temporarily best Celty herself.

Its all getting quite crazy, and that intertwined, multiple story threads tangling into one another is what makes Durarara!! a joy to behold. It really did take about 4 episodes of “good stuff” before we moved onto what I really do think is the traditional Durarara!! level of “great and exciting” entertainment. 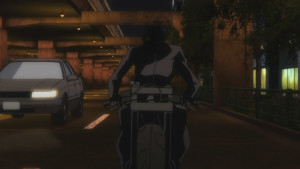 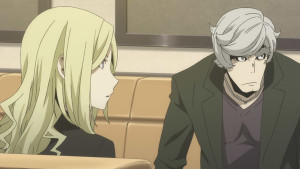 Its from this point forward that I’m really excited to see where the story leads. All in all, while I wasn’t blown away initially by a show that largely had a very high bar to live up to, I definitely feel like it GOT there eventually, and that it’ll keep this stride going forward. 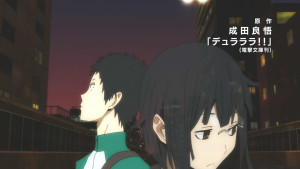 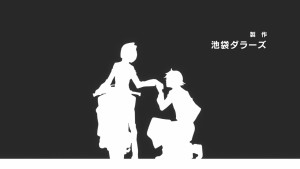 Hrm… Can’t say this OP was bad, but again, much like my impression of the first four episodes, its more or less good, servicable, rather than something awesome like the second OP/ED for the first series, which remain as some of the best OP/EDs I’ve ever seen/heard. Not bad. 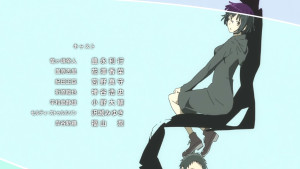 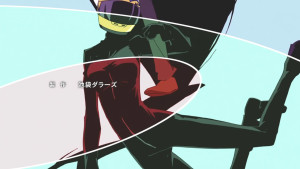 Again, not bad, It was definitely nice to see an ED that kind of mirrored the first ED we saw in the first series. The one big “vertical” line of characters isn’t bad, but much like the OP, I wasn’t particularly blown away. Not bad again XD 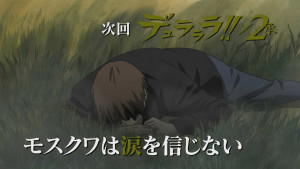 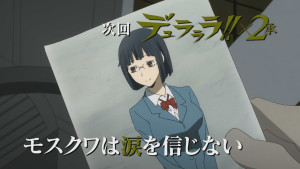 Seems like Simon is getting a bit of a focus next week, along with the plot thickenning regarding Anri and her whole connection to all of this.