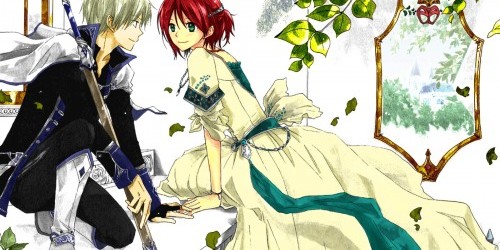 Some great, great news was recently announced, the anime adaptation of an excellent shoujo manga named “The Red Haired Snow White” or Akagami no Shirayuki-hime! For those unfamilar with the story line:

“Shirayuki, a young girl born with unique apple-red hair, happens to meet a famous but foolish young man, Prince Raji. He falls in love with Shirayuki at first sight, and orders her to become his concubine. Determined to do whatever it takes to resist his advances, but with nowhere else to go, Shirayuki cuts her hair and escapes to a neighboring country. While traversing through the forests, she meets an injured boy, Zen. After she boldly heals his wounds, he in return helps her. Meanwhile, Prince Raji sends out his henchmen to search for her. What will become of Shirayuki? What is Zen’s true character? A refreshing fantasy story between an optimistic heroine and a prince who constantly stays on her watch.”

Here is the some of the staff:

This really looks like it could be promising! Will keep you all updated as more info becomes available! ^^