Whereas Kirin was almost entirely absent in episode 4 she returns in full force in episode 5, starting with her solo presence in the material before the opening song, and just like last week the content was of a sort that made me scratch my head at it’s out of nowhere quality and art style that is different from what has become standard for the series as a whole. Curiously though, as the episode marches on we suddenly discover that Kirin is not the main focus of the narrative at all.

As the episode itself progresses, though, we are introduced to two new characters: Shiina’s mother, who turns out to be the primary catalyst for the events in the episode proper (although it is only near the end proper that we realize this), and the stoic-faced, kimono-wearing character chopping up food in the OP sequence while Ryou and Kirin are made to dance via puppet strings finally makes her appearance. It turns out that she is a maid working for Shiina’s family.

While watching the ep and thinking I began to wonder whether or no the episode was focusing on Shiina herself as the main character, but as the events neared their end I realized that Ryou remained solidly in the spotlight. The events that she (and Kirin) were exposed to ultimately reinforced and reminded her of how much she values her own bonds with her family, even though her grandmother has passed on and her parents work away from the home. 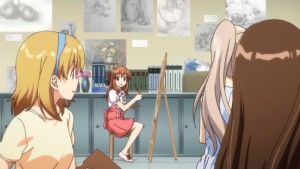 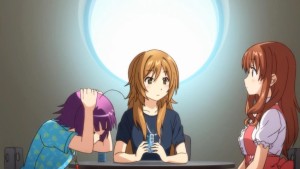 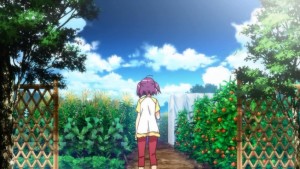 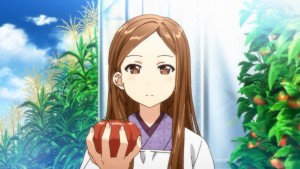 The episode opens with another scene in the art cram school with Ryou and her classmates painting. I must admit that I find myself curious about those fellow students who engage Ryou in friendly chatter – I would be interested to find out more about them – and we hear that summer vacation beginning, which essentially means that Kirin will be able to stay in Tokyo with Ryou for longer than a weekend stay. Needless to say Kirin has plans and hopes to do lots of “summer’y things” (aside from spending time with Ryou and eating her delicious food). Shiina overhears some of this and invites Ryou and Kirin (in that vague and non-chalant way that so characterizes her) to her place where they can do such things.

It turns out that Shiina’s family is rather well off, to say the least. Her house and the grounds are positively massive, with bamboo groves, ponds, gardens, vegetable gardens and so forth. After being invited in via intercom by Shiina at the gate Ryou and Kirin make their way to the house and the latter stumbles across a well kept vegetable garden, zooming on on the tomatoes growing there and meeting the stoic faced maid of the manor, whom Kirin mistakes for Shiina’s mother. 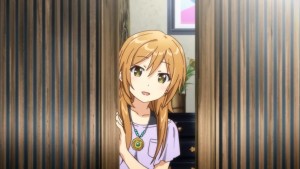 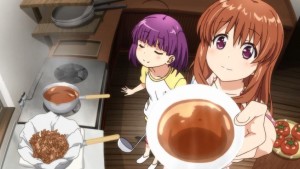 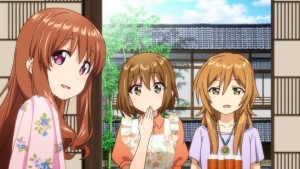 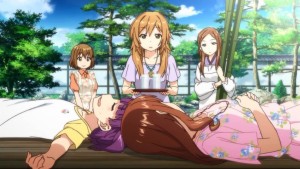 After finally reaching Shiina’s house (did I mention the place is humongous?) she greets them and brings them to one of the rooms in the house, where she eventually introduces them to her real mother, voiced by the delightful VA Matsuki Miyu (aka Yoshinoyo-sensei from the Hidamari Sketch series) – I tell you, between Matsuki Miyu and Nonoka Ai we have some great “artistic/crazy personalities” in this series. They also get to be formerly introduced to the maid of Shiina’s family.

Anyway, Shiina’s mother invites everyone to a “classic summer memory” style meal … eating somen noodles cooled down by dropping them in a lengthy bamboo stalk cut in half to form a chute and that has cold water streaming down it. The noodles are grabbed by the eaters (who stand next to the bamboo chute with chopsticks) and dipped in a sauce before they are quickly and happily slurped up. Needless to say the champ at this in Kirin – no one snaps up and devours noodles quicker than she can, it seems! 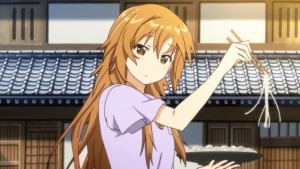 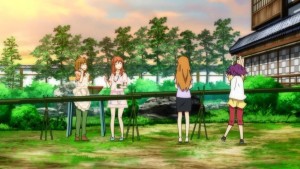 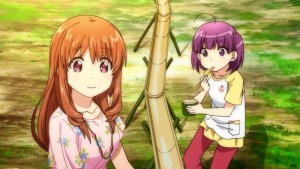 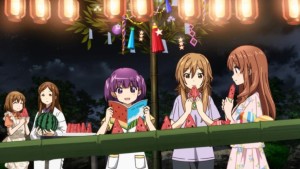 At this point one would think in the midst of all this that the episode was focused on Shiina, but after the somen fest and spending some more time at Shiina’s house everyone eats watermelon together later on and when it gets darker the traditional summer fireworks come out. At that point the focus swings to Ryou, who is watching all this – and in particular is watching the interaction between Shiina and her mother very closely. Shiina’s mother comes over and expresses her thanks that Ryou and Kirin are good friends with Shiina, who definitely marches to her own drum beat. Shiina’s mother is concerned for her, especially that she have friends and interact with them in normal things – it even turns out that in fact it was Shiina’s mother who suggested to her to invite her friends over to the house in the first place.

After the expected polite replies (though in Ryou’s case they are not just external formalities) she continues watching everything and slowly the audience becomes aware that her face is beginning to be suffused with a melancholy sweet-sadness as she sees the obvious affection and care of Shiina’s mother for her daughter. Ryou is moved and touched by this, and especially is so because I think it reminds her of many things – of her own beloved parents and their being unable to be around, of her reposed grandmother, and even of Kirin, to whom Ryou is quickly becoming disposed to regard as one of her close family. It was as if the entire aspect of “kizuna”, the Japanese word for “bonds” or “ties”, especially between people, was blooming in her consciousness again, and she reached out to the feeling with the “hands of her soul” and turned it over and over, feeling the feeling it created inside her and pondering how things have slowly been changing … all in all it was a beautifully done scene. 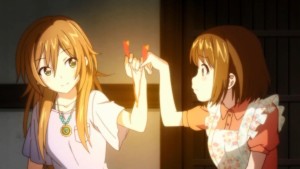 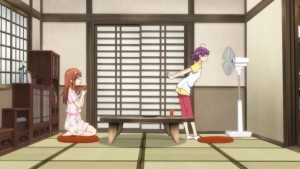 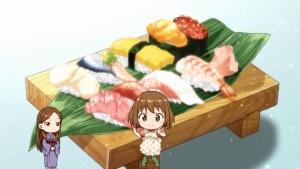 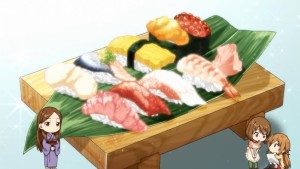 Just as spending time with Shiina’s family was a catalyst for Ryou to “take inventory” of her family ties and bonds and mull over them, so I also found myself doing the same thing, making a sort of assessment of where the series has led us until now and what it has shown us. Unexpectedly the largest question mark of the initial episodes regarding the bonds between the characters shown thus far in my mind has been how Kirin regards and sees Ryou.

I have a distinct impression Ryou has a very good idea of what Kirin means to her and why, and what sort of effect Kirin has on her as well. But Kirin herself is another question. I think that part of her intuits that there is something in Ryou that wants (and perhaps needs) something from her, and to which she responded in a “impulsive” or “instinctual” kind of way. But I would not be surprised if the ramifications have not yet fully occurred to Kirin’s conscious thought.

The classic example of this would be what transpired in episode 4, where Kirin chose to not spend the weekend with Ryou even though there were no classes because she was more interested to eat dinner at a high class restaurant. I must admit that I winced inside when I saw that take place and felt immensely sorry for Ryou. I don’t think Kirin was being deliberately nasty, I just think it was more just being a little clueless and not realizing how important she is to Ryou.

I wonder if there isn’t a part of Ryou that feels hurt at feeling somehow that the people she regards as family are choosing other things to be more important than her? Perhaps one of the reasons she was so close to her grandmother was because she visibly expressed the putting of Ryou first in things? (Again, as illustrated in episode 4 again.) We shall see!

Note: Special thanks to Cherrie from Random Curiosity dot net. who is also blogging this series, for the screenshots. I ran short on time this week so I used the screenshots she used for her post on this episode.