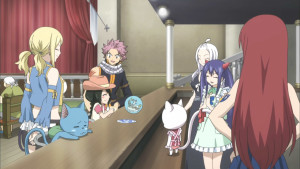 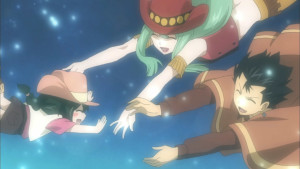 Now this is how fillers really should be! I honestly think that if we had gotten an entire season of little side stories and slice of life moments set in the Fairy Tail universe, then the wait would be a lot more bearable for the next big manga arc.

This episode marks the first week in a long while where Fairy Tail has genuinely felt enjoyable and entertaining for the whole 24 minutes. I think it also makes a very important case for the fact that you can have fun, interesting moments with just the characters and their interpersonal relationships, even in something that is a shounen action series. 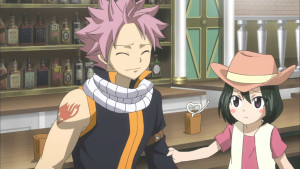 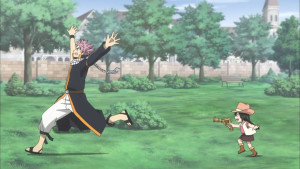 The episode centered around Alzac and Bisca’s daughter, Asuka and Natsu babysitting her, and it was all pretty fun and adorable all the way through. I think Asuka’s character really did ride the fine line between adorable little child and annoying brat. At times she would cry and whine like any child, but the reasons and intentions behind her actions were pure and innocent.

Beyond Asuka though, we got a decent amount of character development for Natsu. What’s interesting to note is that while Natsu is definitely one of the biggest man children in Fairy Tail, he’s still very much an adult. I could easily see Natsu taking the actual contest with Asuka seriously and making the kid cry, but letting her win definitely displays a degree of maturity and caring that Natsu has shown through the entire run of Fairy Tail. 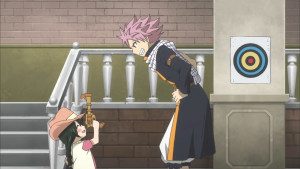 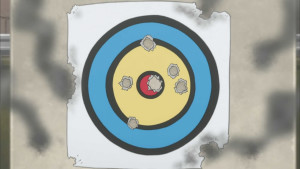 It was still surprising though, and even Lucy was pleasantly surprised by his actions later on.

And of course! I loved how Asuka, being the child that she was, poked and prodded the whole Natsu x Lucy thing in a big way. Asking the two to kiss, and being a child about it, that whole moment was just funny, hilarious and clever pandering to the shipping crowd. 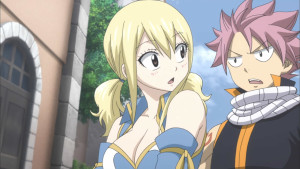 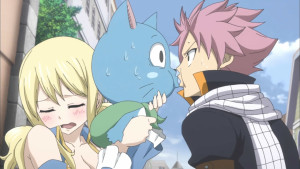 At this point, its easy to see that Natsu and Lucy are starting to behave more like close friends who have chemistry but aren’t a couple yet. I think that development that’s been happening throughout the series, subtly, is pretty nice to behold. Its also “filler” episodes like this that best showcase that progress, and its wonderful to see.

Yes, we could always use MORE of it, not just in Fairy Tail, but shounen in general (in my humble opinion), but hey, I’ll take what I can get.

The actual crux of the story, which more or less focused on Asuka buying back an old keepsake of her parents from a pawn shop, was pretty nice and heartwarming. Its very rare that a child cares so much for her parents, and seeing Asuka do that was great.

The actual “jobs” that Natsu, Lucy and Happy ended up taking on were pretty funny too, and probably the most mundane uses of their magic skills: 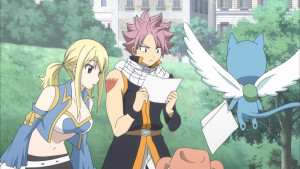 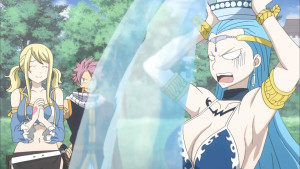 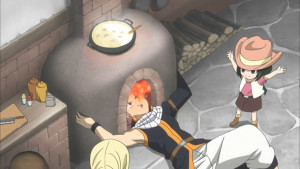 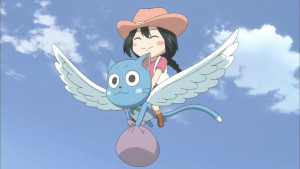 The little “sky pirates stealing the globe” thing was a nice event, and also the excuse for Natsu to showcase “his” shooting skills. The whole moment with Natsu covering Asuka’s eyes, and then having her shoot was just cute and heartwarming. 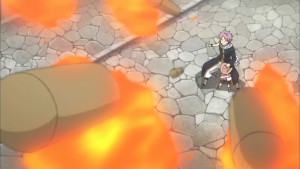 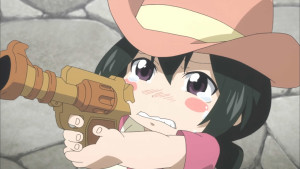 The ending, with the reveal that the globe was the first reward for Alzac and Bisca’s first job together, and that they had sold it to pay for their daughter’s medicine, wrapped the whole thing up nicely. 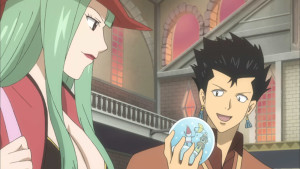 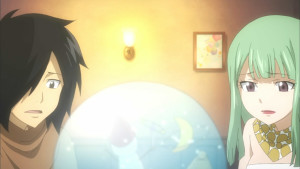 It was very cleverly written, with enough foreshadowing and what not to make it awesome. The whole Lily and Erza escapade to go get the “Maximum Sweet Strawberry” was pretty silly, but thankfully there wasn’t much of a focus on that. I suspect it just gave Erza and Lilly something to do, and well… That’s fine I suppose. I wasn’t a fan, but sillyness in small doses can definitely add flavor to the overall. 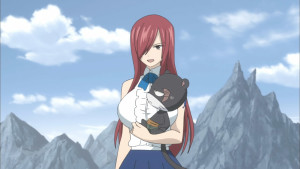 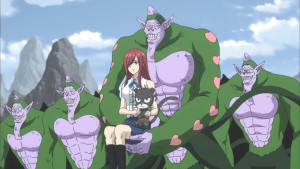 All in all, this was a solid filler episode. It gave us new insight into the characters we are so fond of, it give us some good old LucyxNatsu moments, and the comedy and everything else was pretty good too.

While this episode isn’t something to write to home about, its something that was fun, entertaining to watch. Episodes that can make you smile, chuckle and just generally have a good time, are the kind of episodes you want to see. I’m glad to see that Fairy Tail still has a lot of that, even in its “off the main story” weeks.

Also… to close off, I will say that there was also a new animation for the ED theme this week, which was… Nice? Not sure who exactly is being catered to with the Hisui fanservice shots, but they’re there? XD 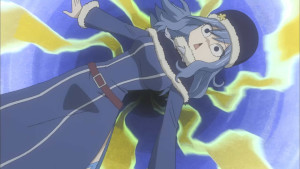 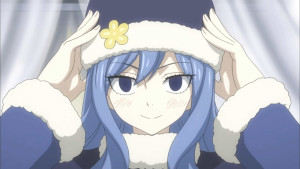