Since I made my general post last week mulling over my initial impressions of the series I watched episode 01 three more times and found myself catching more and more about the story, and beating myself over the head for being dense and not catching it and discussing it earlier. Well, all the more opportunity to talk about it now. But even if I do talk about it, I can already tell that this will be the norm for this type of series for me – that is, it would be difficult for me to blog, particularly in a “timely” manner. 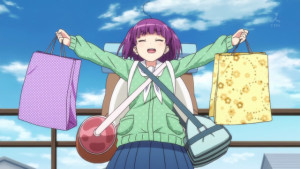 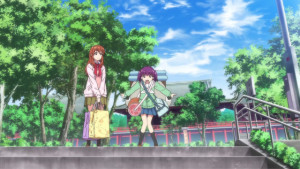 It was quite the same thing with several other Kirara adaptations: Gochuumon wa Usagi Desu ka, Hanayamata, Kiniro Mosaic, Hidamari Sketch and so on all have quite a few number of things going on in the story that are easy to miss. The initial impression one carries away is being happily satisfied with a warm fuzzy glow all shot through with rays of “D’awwwww!”, and it is so strong for many that it almost serves as a Star Trek spaceship “cloaking device” for the other aspects of the story, which are equally enjoyable and even thought provoking at times. 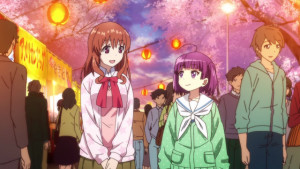 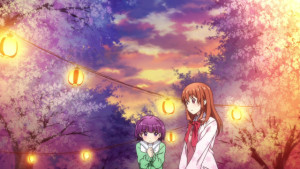 I thought it might be nice to cover aspects of the story proper. Essentially the story centers around Ryou Machiko. The story opens with the information that her grandmother, to whom she was extremely close, ever since she was a child. The grandmother is voiced by one of my favorite older voice actors: Kubota Tamie (known for her roles as Sui in Hanasaku Iroha and Michiko in Yumiro Patissiere, for example), whose characteristic soothing, rhythmic and beautiful voice is immediately recognizable. Her character dresses in traditional Japanese clothing as a default and seems to embody much of Japan’s older culture, times and ambience of some of the more delicate and sensitive aspects of thinking and feeling. Kubota Tamie’s voice is perfect for this in my opinion, and this is important for the character of Ryou and the story as a whole, as it mainly seems to center around her. 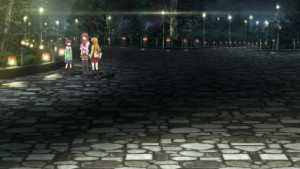 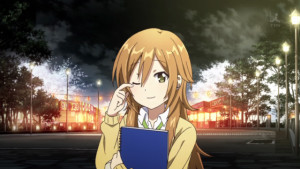 Ryou seems to have picked up some of that old world disposition and defaults of behavior in spending so many years around her grandmother, and it contributes to making her a little of the “odd man out” as a result in a couple of ways, it seems – it is something those close to her are able to spot, like her friend Shiina, who first appears in episode 2. Ryou appears to have quite a bit of artistic talent not only in the realm of cooking (something we very quickly discover in the first episode thanks to the arrival and interaction with Kirin, who is Ryou’s second cousin) but in the visual arts as well (as we learn from Shiina’s descriptions of Ryou in art class).

But what we learn above everything else is that not only does Ryou is a little of an “odd man out”, but she has an air about her of being “born in the wrong age”. It is not bad enough that she is socially crippled, but ever since her beloved grandmother died the year before the glimpses we have of Ryou sometimes hint at an almost wistful loneliness in full knowledge that she is different, that she knows she is different, but cannot pretend otherwise. People like Kirin and Shiina, who accept her for what she is, are lifelines for Ryou, yes, but through them we come to get more piercing glimpses into just what sort of person Ryou is. 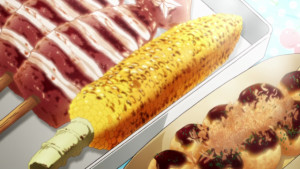 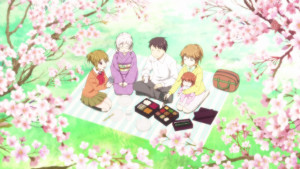 And yet there are still questions … it seems as if Ryou’s parents have either died, or separated or are working elsewhere and no longer interact much with her if they are alive. Her grandma seems to have been taking care of Ryou since she was five or six years old, though we do have flashbacks of Ryou remembering what it was like when she was a child and her family and grandmother were all together and seated on a blanket underneath the blooming cherry trees in Springtime – presumably involved in the traditional Japanese custom of enjoying the transient beauty of the tree’s blossoms known as Hanami. (To be honest I prefer Umemi – viewing the plum blossoms, but that is an aside.) 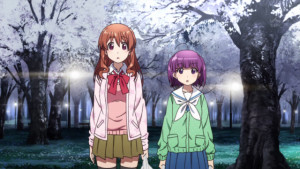 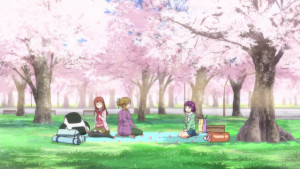 In any event, a very practical way that Ryou shows her friendship and love for others is through cooking for them. Both Kirin and Shiina are keenly aware of this, but it is also clearly known by Ryou’s good-hearted, not-quite-workaholic yet batty and impulsively random aunt Akira (who seems to be the only relative still in contact with Ryou before Kirin arrives on the scene – and possibly providing for her care monetarily). Akira’s voice actor is the delightful Nonoka Ai, who did similar style performances as the memorable Meme from Denpa Onna to Seishun Otoko and Fuuko from the Clannad and After Story series. She really shines through here as well.

By the way, since we are speaking of things shining through, I really have to give kudos to how beautifully and lovingly the series has been animated during the first two eps. It really feels like Shaft CARED to give this little project a careful, delicately detailed animation job, and it shows. I, for one, am delighted. Well done! Also, on another aspect I also must admit that I really, really enjoy the OP of this series. Here again this season the OPs that I enjoy the most are in Koufuku Graffiti and Death Parade. Really excellent stuff…. 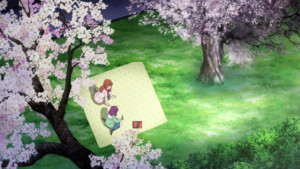 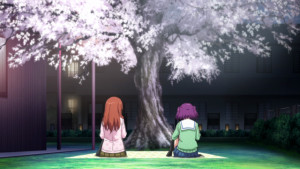 I would love to be able to officially commit to this series, but I am still not quite convinced that I would be able to do a worthwhile job on a weekly basis. At the very least I can promise to do a summary review of the series at the end of the season if I do not pick it up for weekly blogging, because at the moment both it and Death Parade (two more different series might be hard to line up side by side) are the new offerings of this season I am enjoying the most.