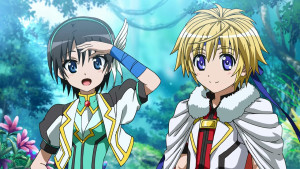 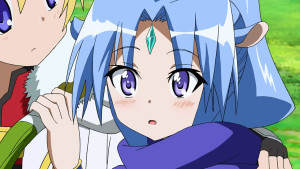 I will give Shinku credit. It really did not take him very long to get that sheltered dragon priestess falling for him XD. The guy is one heck of a smooth operator. I will say that Sharl is a pretty cute character and her reactions to Shinku were definitely worth seeing. Not overly surprising that she fell so hard so fast since she appears to have been living in isolation for quite a while.

The episode itself was pretty good. The situation is a lot more serious than anything that happened in the second season . I have a feeling the situation may not last a long time this season, but it should be fun for however long it lasts. We’ve got some major demon creating monsters in the forest and messing with the dragons that are seriously tied into the natural forces of the world. A kind of serious situation. Now all these forces that have been playing war games and training have an actual war to be involved in. They aren’t playing for fun, this is a conflict that has serious stakes for them all. The protection of the land might be interfered with depending on how bad this situation gets. 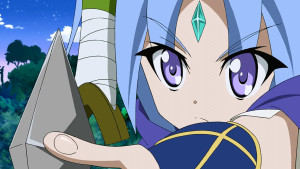 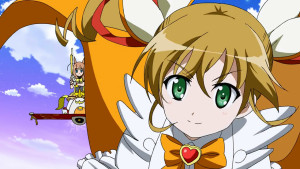 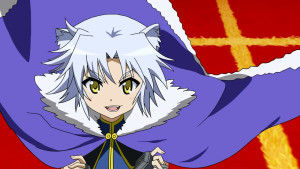 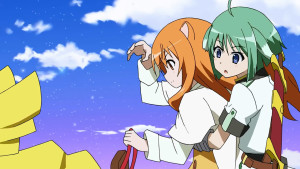 This episode did allow a lot of characters to show what they could do. It was especially a nice few moments for Sharl when she was going all out and doing a good job against the demons. She did need a rescue at the end, but at least she showed some nice archery skill out there. Can see that she was doing a solid job protecting the forest during the early stages of this outbreak.

The rest of the cast did a good job out there. Rico and Eclair were kind of sidelined, but it was an aerial battle so maybe not the best scene for them to make an impact. It was far more of a big moment for the Pastillage aerial army. They were the major force that stepped up and did a lot of the damage. This kind of battle was their strong point so no complaints there. Even Gaul and his group found a way to make an impact. It does help when you have a giant platform you can fight on XD. This was kind of the moment you usually saw early in the previous seasons where everyone just shows up and impresses. This is a good group to take on what is coming. 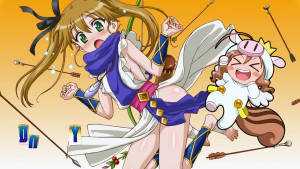 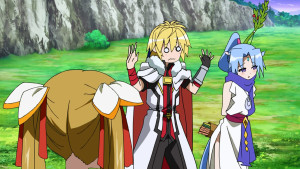 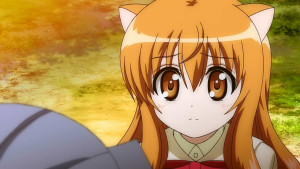 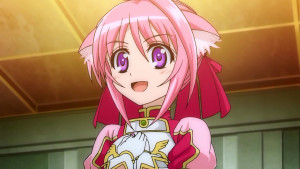 A kind of amazing thing though that the search parties are likely outgunned in comparison to what is coming next. Despite the fact they have a lot of elite members there, they don’t quite have the pure numbers to handle the next attack. Can easily see them struggling quite a bit against what will be unleashed and needing to hold the line until more reinforcements show up. The biggest guns are still not there yet. Once they can get everyone on the scene they can start dealing with this threat.

I did find it interesting how Sharl really was grateful for the help, but still wanted everyone to go home. Some might read that as rude, but I can get her mindset. This is her duty and her job. Something she has grown up with and carried the burden for the whole time. If someone else just shows up and cleans up the mess then what was the reason for her being there? Plus if the legends are on the money it’s really something she has to do alone and perhaps a serious sacrifice will be in the cards. The legend has the kind of dark tone that was occasionally there in season 1. Does sound like she has to give up her life to stop this threat. Although I can’t see anyone there being willing to let her do that. 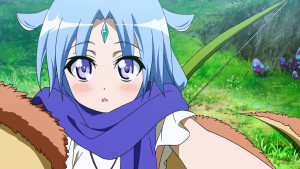 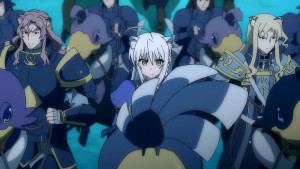 As a whole it was quite the solid episode. There was a good battle that let Sharl show off her skills and everyone show off to her. The search parties met up with Shinku and Nanami which was nice and it set up the conflict that is coming. Really the Biscotti knights getting ready to ride out showed how serious they were treating the situation. Things have reached crisis mode. Next episode should be pretty good as well since things are bound to spiral out of control and I’ll be curious to see which characters reach out to Sharl to convince her that it’s ok to accept help.
Score: A