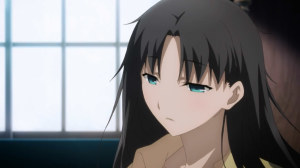 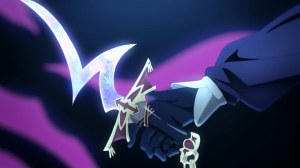 Well that’s one intense way to leave the series for a few months. Going to be a kind of insane wait for the second half in April. Really this show just had a great last episode and doing it in a one hour burst instead of just two regular episodes over the next couple weeks was better. They could just tell one big story in this episode and have the impact be even greater.

In a sense a lot happened here and you could still summarize it pretty simply. Saber got highjacked and things are very bad right now. Shirou is in horrible shape right now. Physically he’s a mess because of the hit he took from Saber and the lack of super healing he was getting before. On top of it, he’s emotionally banged up because of how bad things went and how Rin is pushing him away. 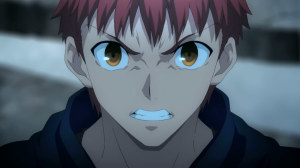 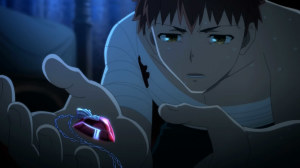 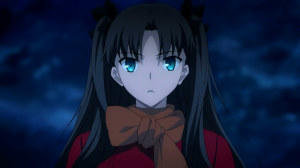 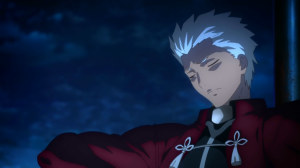 It’s easy enough to understand what Rin is doing. She wants him to be out of this. She said herself that she could push him away as much as she wants, but it isn’t over until he says he wants out. Even jumping off the roof like that was less a message to him and felt more like her running away. In his state it’s almost cheating to run off like that and not let him refuse her demand to back away from this. He literally can’t do anything else. I’m sure Shirou is going to keep chasing, but it will be slow going.

The hardest thing is that Shirou can’t back away. Literally he can’t since the place of retreat is the church that Caster is taking over. But, he can’t because Saber is being used and Rin is in danger. Once he pieced together that she was the one who saved his life after Lancer’s first attack…he can’t back off now. Once again he’s been saved upon the brink of death. With all that talk from Rin about debts, he owes her the most of all. Although you can say the amount of times he’s taken hits for her that he’s basically protected her life enough times. But for Shirou I can’t see that as making sense to him.

Although the reality is that he is little help. Even if he could push his body with the projection he used before, his body is already torn up. He can barely walk. If he tries to fight like this it could be a disaster. And yet…no matter how dramatic her words I can’t see him backing away. His actions are crazy and almost suicidal, but I can’t see him doing anything but continuing on like this. 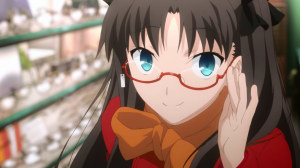 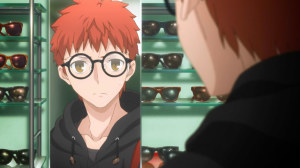 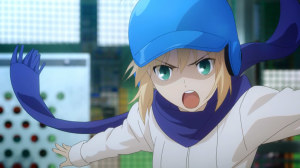 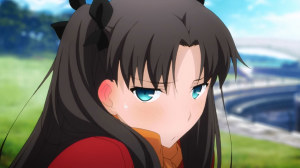 All this started out during a good and entertaining first quarter of this episode. Rin literally taking Shirou out on a date. Partly done I suspect to ease the burden on him from all that’s happened and let him physically rest in a sense. If he just spent the day at home he’d probably yank Saber into training with him or something. This way he takes it easy in a sense. Also I think she might have tried purely to force himself into having fun. With the last conversation they had I’d believe that. His lack of enjoyment for himself really bothered her, so forcing him to have fun might have been a goal. A chance to mess with him a bit was probably in there and also she clearly likes the guy so actually wanting to go on a date is believable. Really, Rin is just complicated XD.

The ‘date’ itself was pretty fun. Saber getting frustrated at the baseball practice was hilarious even if we didn’t get to see much of it. Swords play and baseball are a bit different. Just nice as well to see Rin get a bit frazzled when Shirou asked if she was doing pushups before bed or something. Can imagine she keeps herself in great shape through hard work like that. Rin being good at it is believable since she does like to do things that she finds fun. Personal enjoyment is part of Rin, be it magecraft, school, or batting practice.

I did just enjoy Rin and Shirou managing to fluster each other a few times there. Sure, it was mostly Rin who got to fluster Shirou since it was pretty easy for her. But he did get a few shots back in that were clearly effective. Honestly I can’t even recall how many times I’ve seen a character’s ears visibly get red from embarrassment like Rin’s did here. Often it’s a red face and that’s it. 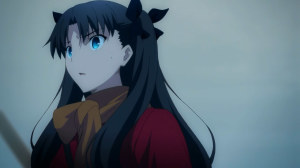 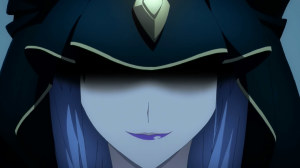 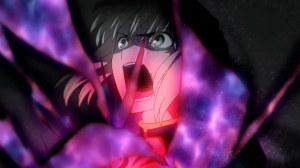 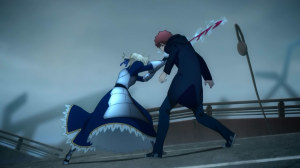 One big thing is that Rin now understands somewhat what Shirou has gone through. Caster (somehow) found it all out and revealed it all. I suppose you can say ‘magic’ and explain it that way. She was clearly interested in Shirou and Archer so can imagine she’d dig into Shirou’s past at least to find out what she could. Not the whole story since she presumed Kiritsugu forced him into magic instead of Shirou choosing that himself.

The whole Caster mess was pretty intense. Again Archer was conveniently far enough away to not be helpful. I’m starting to think Rin shouldn’t get on Shirou’s case about carelessness when she almost always has Archer too far away to back her up. He can go invisible, have him stuck to your back already! I get with his eyesight he can see well from a distance, but this is twice you’ve been stuck in a situation like this.

You can also see how extreme Shirou’s views are. He was actually going to let Caster cut his arm off if it meant saving Fujimura. He took that sword hit from Saber to protect Rin. He is just that extreme right now. The unbelievable is doable. He will absolutely not side with someone like Caster, but he will sacrifice limbs to save loved ones and hostages. Even in that state at the end he wanted to keep going. I can understand Rin wanting to do everything to push him away because she doesn’t want him to die in this. 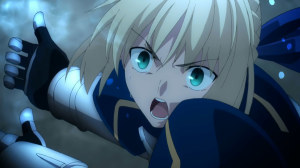 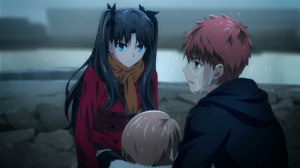 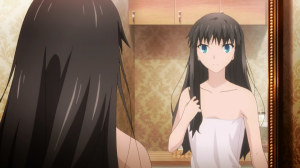 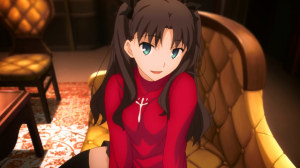 The whole situation turned into a mess though. Shirou screwed up again and used a command spell to stop Saber’s attack. This time it actually cost them. Saber can resist to a small degree, but not enough. The power of the command spell is extreme. At best they can use the hesitation to try and beat Caster, but it will be hard. Good thing that Caster has separated from Assassin though. That makes this Archer and Rin assault at least somewhat possible. If it was Caster, Assassin, and Saber it’d be completely hopeless.

Rin made some good observations about Archer. After the whole Rin lacking feminine charms bit. He did hesitate with Saber the first time. Surprise is an excuse, but not good enough. I think Rin’s observations are pretty spot on that he has a connection to Saber. More interesting is him not talking about his past. With what he’s said to Shirou it’s not believable that he still has no memory of his past. Calling total BS there. Though the reason is probably more interesting than the fact that he’s hiding things from Rin. 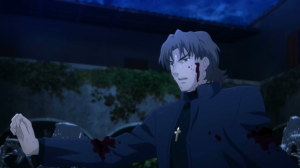 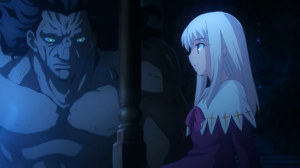 As a whole this episode was just purely entertaining. The early portion was cute with Shirou and Rin’s relationship continuing to build and the end was pretty strong also. You can tell that Rin wants to deal with Caster on her own before Shirou stumbles his way over and Shirou should know how useless he is right now. But…he can’t leave things be. I can’t wait to see how the first episode for the second part goes. They just give you enough to say “holy crap this will be great.” So I won’t make a big statement since this is just part 1, but I will say this was one first part. The focus on Shirou, Rin and the war itself has been great.

So much more I could talk about in more detail. The identity of Caster revealed, Kirei showing off his combat skills against those skeletons, etc. This was a huge last episode for the first part. Though I will say the end reminded me that we haven’t seen Illya all this time. Has she been on vacation? Guess we’ll find out in April.
Score: A+