You Should Be Watching: Yuuki Yuuna wa Yuusha de Aru

Often before the beginning of a season, one gets a sense of some series that they will definitely like or dislike. Then there are others one does not receive a clear “read” on. It is often somewhere in this section of previewing that one comes across what they suspect may be a “dark horse” of the season – often more the result of intuition than anything else. As intuition goes sometimes we are on and sometimes off. When we are on and that intuition does in fact prove to bear fruit, then the series in question can become a favorite of not only that season but the entire year itself. While for me it is too early to say whether or not it will be among the best of the season or even the year, Yuuki Yuuna wa Yuusha de Aru has certainly been building up momentum to be one of the dark horses of the season for me. 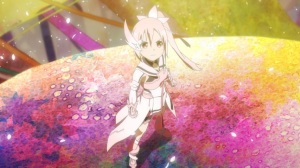 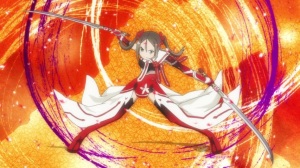 First off it should be said that this series is a sort of “historical sequel” to a manga and light novel series that had been in the works for a little while that is titled “Washio Sumi wa Yuusha de Aru”. The series as a whole takes place in an alternate future of sorts, where the chronology is according to “the era of the gods”, some 300 years after said era began. The anime series (of which there is also a PS Vita game in the works by the way), however, takes place a few years after the events of “Washio Sumi”.

It opens up into what one might expect to be the usual cgdct (Cute Girls doing Cute Things) school setting (the Key Visuals before the series began reinforced this as a probability), but it very quickly escalates into a mahou shoujo (Magical Girl) setting. More than that – a mahou shoujo setting that is very different in tone than the expected cgdct genre and rather unique compared to other series airing this season. Essentially things become quite serious and rather dark of all of a sudden. Many people will be reminded of the infamous Madoka series as a result. 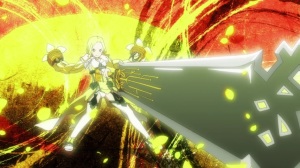 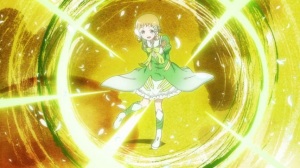 For me the similarity to Madoka is more in the heroes fighting surreal, tech looking beasties named Vertexes (they reminded me of tame H.R. Giger creations somehow) in alternate dimensions. This alternate dimension, though, is somehow like a more blurred, semi-impressionistic or watercolor painting styled fairy-realm. It is quite a contrast to Madoka’s Dali-horror like look. Its almost like something one might expect from a “good fairy” verses “bad fairy” sci-fi setting. Even if its not exactly like Madoka, I feel that the story has the potential to get pretty dark.

In many ways one of the most effective aspects of the series has been “the feeling” it has been able to generate. Partially assisted by the excellent soundtrack, which is a curious mix of old Japanese and “Middle Eastern” themed blends, similar to those found in Katanagatari and Noragami. It quietly stood out and made its presence known in an unobtrusive yet clear and distinct way. 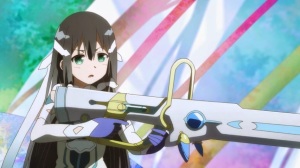 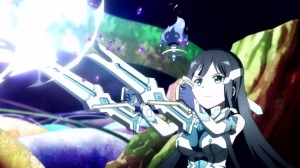 My initial reaction to the series was definitely one of both surprise and intrigue, and not emotional engagement. It was effectively “fluffy and ominous” at the same time. The combining of the two reactions to the degree that it did was not something I had come across in some time (if ever) and initially the intrigue remained more on a cerebral level. While initially I was still enjoying it, it took a while until the series clicked with me in terms of emotional engagement… The series definitely evokes feelings of the odd, almost imperceptible reactions that are not quite so easy to articulate. Reactions that are not necessarily grandiose or bludgeoning, but not subtle either… They exist somewhere in the middle, almost like a noise you can barely hear or a smell you can faintly detect. The impression, summed up, is like touching a distant memory. 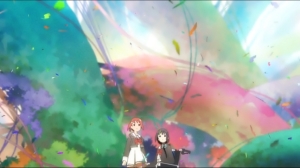 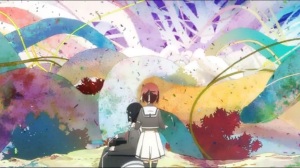 Beneath that, is also a feeling of “being off”, unsettling, almost like a piece of moody classical music that suddenly switches into the chromatic scale for a minute or so. There is an “emotional background tone” of sorts. It is both foreboding, unnerving and…hidden, almost lying in wait and knowing it can’t be seen, maybe? It doesn’t feel angsty or suffocating, but almost as if the threat were in a “liquid state”. Like a “malevolent, sentient and intelligent pool of water” at the deepest and darkest roots of a mountain.

These complex feelings are masterfully spun and developed slowly, never going away even in between the battles or after said battles conclude. They remain present right up until the “big reveal” in the most recent episode (#8). At that moment, the biggest question for me was where the series would go on from here, now that all the dim, ominous foreshadowing had been born out and shown to be true. Where the series goes from here will definitely make or break it as a whole, but up to this point, its handling of the narrative has been masterful and engaging, in my opinion. 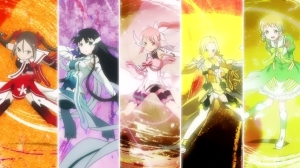 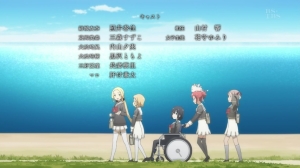 For those readers who are interested in the mahou shoujo genre this series is definitely worth a look. It is nowhere near as “dark” as Madoka, but it is also nowhere near as peaceful as a series from the PreCure franchise (though they can have their dark moments too). Perhaps the second half of the first season of Nanoha in terms of general feel could be a decent reference point, but Nanoha was never “surreal” or dreamlike in the way that this series is.

I invite anime watchers who either dismissed this series as just another “cute girls doing cute things”  or “just another Madoka clone” to give it a chance. To patiently let the story weave it’s narrative – It is much more than either of those first impressions, despite the dim similarities. It is definitely it’s own creature thus far, and certainly both worth it and even deserving of being treated as an independent entity that stands on it’s own and rewards those who follow it.