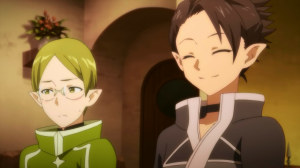 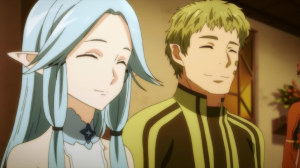 This was a good episode to move things forward and get Asuna involved with the Sleeping Knights. This kind of situation though does make me glad they are in ALO and not the death game situation of the first season. This group kind of reminded me of the guild Kirito joined in the first season and how that all turned out. A pretty nice group of people.

I did appreciate the moment where Asuna reminded herself that this was a different situation from before. This isn’t SAO as they knew it. If they happen to get wiped out or if some of them don’t survive the battle it’s not the end of the world. They aren’t going to die just because they got beaten by a boss. For someone like Asuna and I think a lot of SAO survivors it must be hard to readjust. The stakes aren’t the same so there isn’t a need to be as incredibly careful and tactical about it. At one point in the first season they noted how long it’d been since they lost people in a boss raid. Asuna was a core part of deciding strategy and the point was to make sure they didn’t lose anyone. Every life was precious. 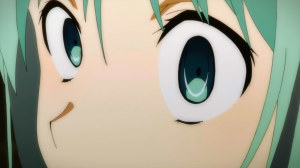 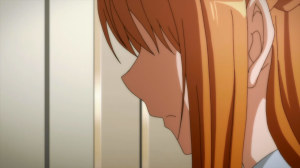 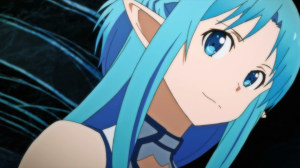 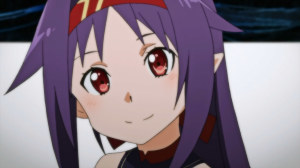 I do hope this is the start of Asuna being able and ready to face her mother. Yuuki makes a great point that you just have to clash with people sometimes to understand each other. Not picking fights avoids conflicts, but you never really know what a person is feeling. I’ve dealt with people where it was easier to just nod at what they were saying. But at the end of the day we never really understood each other as well. Fighting with people can help express your seriousness.

I’ll look forward to when Asuna can really just get int a full blown screaming match with her mother. At some point her mother needs to be brought into the reality of things and what Asuna has been through. I’ve pulled the cord on a sibling when they were playing a game for one reason or another. It’s not very mature, but it’s fairly harmless. A full dive game though is something different. When you are completely there and suddenly get yanked out it can be pretty unsettling. 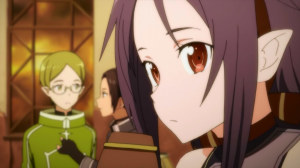 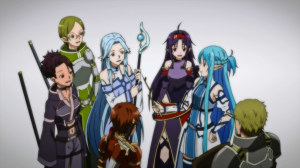 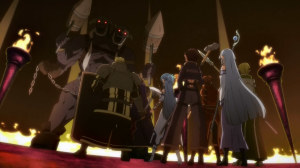 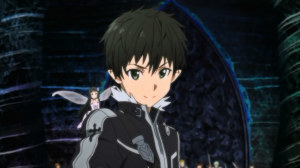 Some might overreact to Kirito showing up at the end, but it seemed fitting to me. I’m sure he was keeping track of what was going on especially with Asuna being involved. Not sure if he heard Asuna was involved was word spread about these guys gathering for a raid. Or if he was just having Yui keep an eye on things and once she told him what was going on he rushed over to help. Either way I think it’s fine. He’s not there to fight the boss for them. Kirito just showed up to buy Asuna and company some time to take this on. That’s kind of what they need right now anyways.

It was interesting and curious in terms of why Yuuki decided not to invite Kirito. Despite the fact that he was a good choice, once he realized the truth about her it was no longer an option. I find it curious just based on the fact that she’s got a secret that she can’t even fight with someone once they find it out. Deciding to recruit Asuna because she was a combination of powerful and unaware. The whole thing has very unsettling implications with the time limit this group can fight together.

The goal for that group is pretty bold. Taking on that boss by themselves so they can get their names up there together. I can respect that. Kind of makes the system a bit questionable since only the leader can have their name up. Keeps the bragging rights to one person. Though maybe not the biggest deal in the world. Here’s hoping that Asuna and Yuuki can bust through the lines and take on that boss in a great battle next week. Seems like a tough looking one, though it should be possible to overcome it. After all if basically Kirito, Asuna, Klein and a weak guild could take down that one boss from season 1 then this group should be able to manage it. 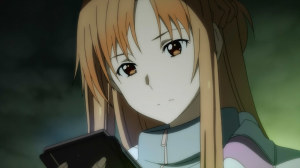 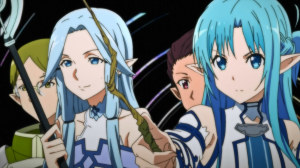 In the end this was a good episode and I’m eager to see how things will go from this point on. Asuna is getting a chance both to just enjoy herself and realize that she’s got to face this issue head on. I’m glad she’s trying to work things out for herself, but hopefully she doesn’t think it’s a necessity. When people are struggling with things there is nothing wrong with turning to friends and loved ones for support. People can only handle so much on her own. I don’t think Kirito should face Asuna’s mother on this issue for example, but talking to him about it seems reasonable.
Score: B+