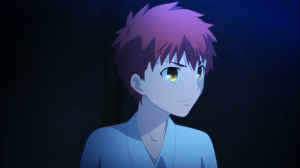 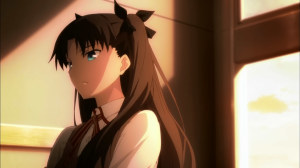 Well the action got going again and once more it stuck to the magicians with a bit of servant focus here and there. Honestly I couldn’t blame Rin for almost blowing her top after seeing Shirou so stupidly wander into school like that. Since it was right after Archer asked Rin what she’d do, the situation kind of had to unfold like that. In some ways I just agree since if Shirou wanted to attend school he should have taken more precautions. Either have Saber hiding around the campus somewhere or just calling in sick for a while. The situation is just that dangerous.

The episode did have focus on the situation in that city and making clear that there are a lot of players involved in this. Rin and Shirou’s school has become a focal point for trouble. That field that is set up to pretty well kill the entire school being the main issue. Seems like we’ve finally identified the servant portion of the team that is behind that problem. 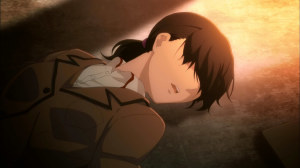 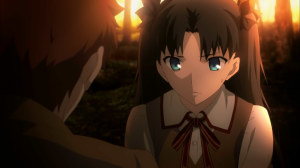 Can see why the master of that female servant is setting up that killing field in the school. While she was in a position to kill Shirou there, it honestly didn’t feel like she was as overpowering as say Saber. If Shirou hadn’t been snagged by that weapon in the first attack it would have been more difficult for her. If she is in that kind of state though I can see why they would be going and killing off the school in order to power her up.

Kind of funny how things go from Rin ready to kill Shirou to teaming up in order to make sure their school isn’t annihilated. I guess that just shows how Rin is a pretty honorable person and doesn’t like dragging innocent people into her situation. There really wasn’t any hesitation to going to save that girl who had been pretty well drained and was on death’s door there. She kept her focus on the job and only after that was resolved did she run off to help out Shirou, which of course was something she didn’t have to do. Seems like at this rate she’ll just keep on owing favors to Shirou and paying them back. 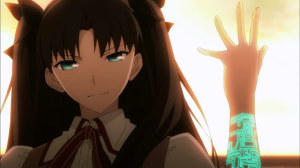 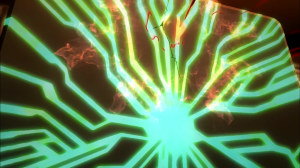 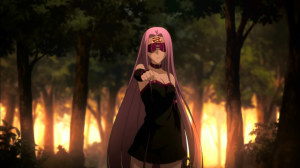 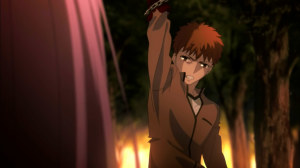 The little showdown with Shirou and Rin was pretty fun to watch. It showed again that Rin is pretty capable and can lay waste if she chooses to. I’m not surprised that she snapped given that she really did warn him beforehand. That was a spot where things could have ended pretty badly for Shirou. She was firing off some powerful attacks and having him run for it. I do wonder if she really would have been that ok if he’d gotten killed, but who knows. Probably would have felt bad, but have to rationalize that this is a war situation.

In the end things turned out ok with them. Shirou made a nice sacrifice there covering for Rin and she did hurry to help him out afterwards. Both characters showed off positive qualities in that instance. Shirou really did put himself at risk there and Rin pretty well dropped hostilities to make sure Shirou didn’t bleed out there. Think even Shirou was taken aback by how she shifted gears and went so far for his sake.

Also just a nice little scene with Shirou accepting the truce and throwing Rin off balance. Since he was certain that he’d never betray her so she’d be on his side forever XD. The chat also showed how very different their backgrounds are. Rin has lived with this heavy weight of what a mage is and her responsibilities as an inheritor of her family’s magic and one who will pass it along. On the other hand Shirou was brought up without all those burdens and given a lot of freedom. And Kiritsugu not passing along his crest really says a lot in itself. 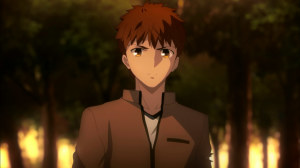 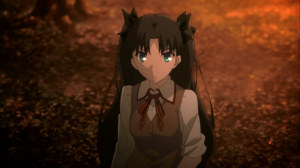 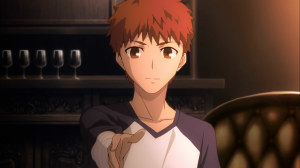 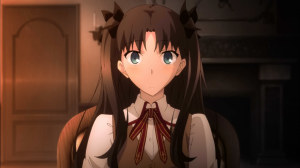 The situation right now at that school is uneasy. The archery captain has gone missing and in this kind of situation could very well be dead. It certainly seems like Shinji is connected to something since he’s not around and was the last person to see the missing archery captain.

Now with this alliance in action we can see how things will unfold from here. Have a couple obvious targets to take into consideration. The servant who was seen around the school and the caster class which has also been causing trouble around the city. They at least seem to know where she is so that might be the easier one to target early on. 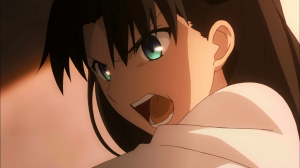 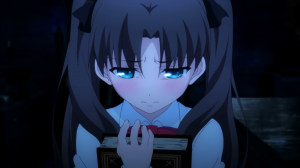 Overall, I’d say this was a good episode. It had some nice mage action and showed off another servant that will have to be taken down eventually. At least for the time being don’t have to worry about Rin trying to kill Shirou again. Not unless he does something really stupid, but I’ll have some faith in him on that front.
Score: A-