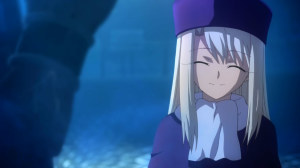 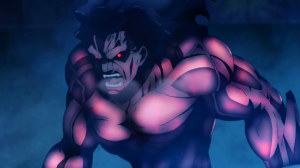 Holy crap! It was a bit tough to hang back on the cliffhanger last week, but this episode was so worth it. I didn’t think the whole thing would be focused on the Berserker battle, but there you have it. They did a great job having this huge battle with Berserker, but even managing to have focus on Illy and Rin on top of it. That was a battle I didn’t expect to see so I give full props to the show on giving us that.

It’s some kind of wrong that Illya can look that cute while telling a giant monster to go and kill people. There is a serious gap in play there. Though I guess considering the kind of battle this is, it’s not that unreasonable to just let loose and start the fight. A level of politeness to introduce herself before the battle got started. And even after Rin was the one who picked the fight with her 1 on 1, not the other way around. Either way there really is a serious gap here between this Illya and the spin-off. 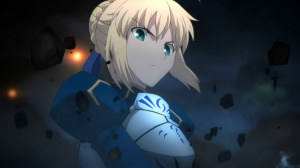 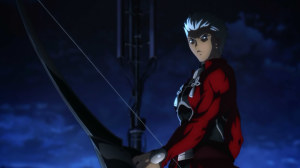 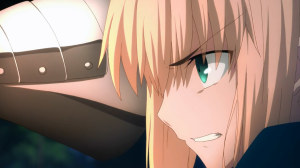 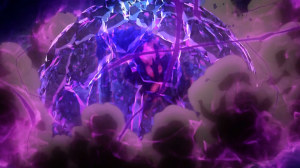 The fight with Berserker was all kinds of flashy. It’s tough to say a lot about the episode though. Episodes like this with awesome action make you just want to stop and admire it rather than comment about it XD. It just showed what kind of incredible hero Berserker is. Even completely deranged he can fight at such a high level and with incredible skill. Even without a weapon he was able to knock Saber back with pure acrobatics and martial arts. Just a monster on every level. Even Archer’s usual attacks didn’t do a whole lot. Regular arrows even from someone like him just barely scratched the surface. It was a pretty cool thing to see Rin combo with Archer to weigh Berserker down with gravity and then load up on arrows.

All that made Illya take Archer and Rin lightly and created an opening later. Still, just being there allowed Saber to lure Berserker into an area that was more suitable for her than him. Using the graves and landscape as cover to jump in an unleash powerful strikes. Even revealing her sword temporarily to strike what normally would have been a finishing blow. Shows Saber’s intelligence is a major advantage. She didn’t just stupidly fight him, but rather changed the situation to one where she had a chance. 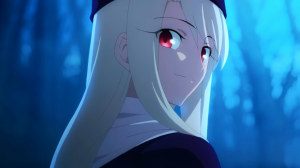 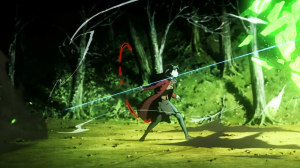 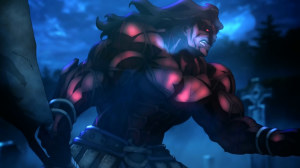 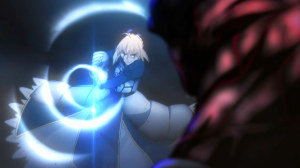 Rin and Illya was a cool little fight. That was something I didn’t expect, but showed the levels that those two are at. Rin gave a good effort there, unleashing a nice barrage and that jewel shield was pretty creative. However, Illya really is on a different level there. The girl is a monster in her own right. Those little familiars were able to pin Rin down and even break through her defense by changing them into swords. She is a powerful mage in her own right and taking her lightly because she’s small and seems young would be a dangerous mistake.

My condolences to Shirou who had to grow in a hurry during this conflict. Anyone would be freaking out and shaking after such an intense fight. It took a lot for him to get up and try to just be there to support. Even if he doesn’t have the abilities to take on Illya and Berserker he tried to contribute. And in the end he did help out. If he didn’t jump in there and pull Saber out of the firing zone she might have gone down from that attack. I’m not sure what happened to Shirou there at the end. If he just freaked out after the danger was passed I wouldn’t be surprised, but instead he just started to cough up blood. 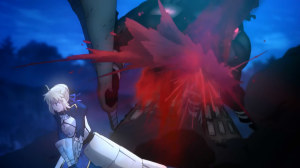 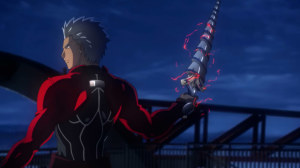 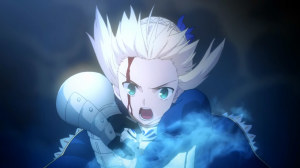 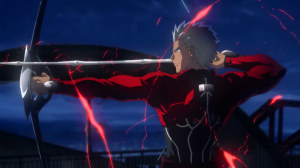 The star at the end though was definitely Archer. That was one cocky expression he had after launching that crazy attack. I have to think though that the attack did damage Berserker and he just recovered in the midst of the explosion. Otherwise it’d make no sense for Illya to be impressed by Archer enough that she pulled back. Saber would have stood out more for the damage she inflicted. So will just say Rin misjudged the effect because she couldn’t see into that inferno. Or maybe Illya is just impressed by large explosions XD? Does make you wonder about Archer’s background and the ability he has there. It wasn’t some common arrow he was launching after all. Though maybe the most unusual was that Shirou had a sense of what Archer was doing.

Of course I have to give full props to Saber’s attack there. She really took Berserker on with full force. I liked the attack at the end from her being such a straight forward charge, but one where she managed to get her attack in despite him even blocking her strike with his hand. It didn’t completely stop him thanks to that revival ability, but it still forced that ability to be used. 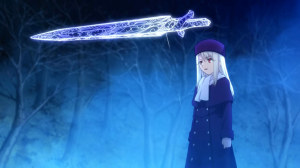 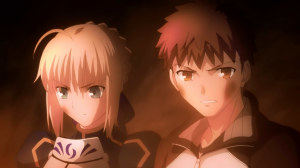 Anyways, that was a purely awesome episode. The action was just really damn good. It was impressive to watch and you can see the budget they are pouring into this show. The music was fine and certainly gave the episode a heavier mood. It was just fun to see Saber, Archer, Berserker, Rin, and Illya all get some action. I don’t expect the next episode will be that busy, but this one was pretty entertaining from start to finish. Also of note was Kirei having that secret meeting. One that would make plenty of sense to the Fate/Zero crowd who I’m sure could note a lot of interesting bits coming out of this episode.
Score: A+