Anime series based on games are either just bad, or so niche that they rarely amount to anything special. Shingeki no Bahamut though… is a show based on a mobile card game created by Crygames, and is not only the exception to the rule, but one of the surprise hits that came out of the Fall 2014 Season. 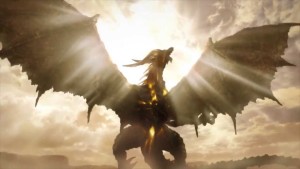 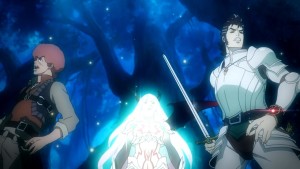 Perhaps the true success of the series is in moving away from the card game aspects of its source material, and instead creating a mostly original story set in the game’s universe and utilizing the lore that the game has crafted. Its clear that Crygames had the right idea about promoting their game via an anime adaption that stood by itself as a great anime series, rather than something that shoehorned aspects of another medium unsuccessfully.

The easiest way to describe Shingeki no Bahamut – Genesis, is to say that its a fantasy version of the popular Samurai Champloo. That description isn’t wrong, but its definitely selling the greatness of the series short. The similarities between Shingeki and Champloo are simply in the fact that the series focus on the traveling escapades of three characters, Favaro, Kaiser and Amira. From there, Shingeki no Bahamut goes on to carve not only its own identity, but ends up being perhaps better than Champloo in some respects. 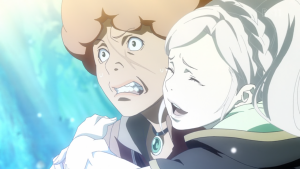 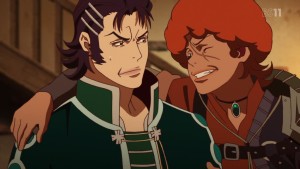 Much like Champloo, Shingeki no Bahamut lives on its three main characters. Favaro is the typical trickster character that is actually a kind guy at heart, Kaiser is the uptight, honored bound knight that is after Favaro, and Amira is the young woman on a quest where she requires help.

What’s interesting is that Amira is actually the strongest of the three characters, but despite that power, she’s got the personality of a child. Kaiser, on the other hand, wants to do what he believes is right, but is sorely mistaken on the facts. And there’s Favaro, a guy who constantly tries to convince himself that he’s not the good guy he thinks he is, masking it all in a thick layer of jokes and trickery. 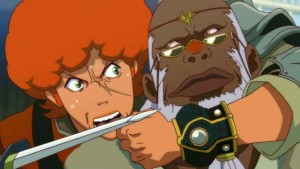 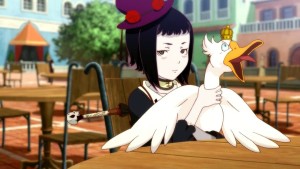 Yet another thing that has Shingeki no Bahamut come out on top, is the fact that it has a pretty strong cast of supporting characters, villains and side characters. There the drunk bounty hunting rewarding diety Baccus who hangs out with a talking duck, a young girl that’s actually an old sorceress turned zombie, and solid takes on classic demons like Azazel and Beelzebub. All of these characters greatly compliment the three main characters, making for one great overall cast of characters.

The dynamic between all three main characters is pretty great, and really sells the main story of traveling to find Amira’s mother. Of course, the story is hardly what it seems, and the plot actually has its own twists, turns and has a pretty solid resolution at the end of it all. 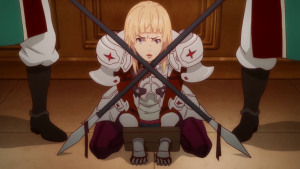 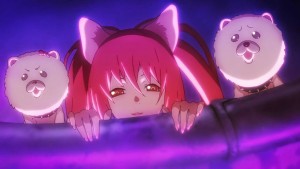 While Shingeki and Champloo have yet another similarity in the fact that the journey itself is more interesting and less predictable than its ending, the thing that sets Shingeki no Bahamut apart from its predecessor is the fact that the plot does build up to a powerful and definitive conclusion.

Its clear that while the major story revolves around Amira’s quest, and her two acompanients, there’s other things going around in the world too, that tie directly into her own story. There’s a whole story about the revival of Bahamut, a creature that almost destroyed the world, a war between Angels and demons, and there’s even twists on traditional historical figures like Jeanne D’Arc in there. Its this marriage of a more definitive “end of the world” story mixed with a more character driven “journey” that makes Shingeki no Bahamut such a roaring success. 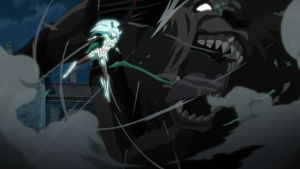 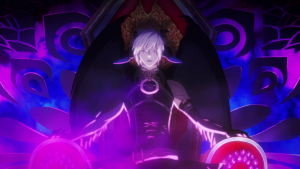 If there’s a flaw in the story, if you can even call it that, its that the ending is pretty predictable and standard fare. Shingeki no Bahamut isn’t something that’s going to throw the fantasy genre on its head. Instead, the feeling one gets from the series is one of the classic, hollywood style movie story, with tons of swash-buckling action, romance, tender moments, and good humor to boot. Shingeki no Bahamut is a fun, action based thriller, and it doesn’t advertise or aspire to be anything else.

And much like its story, the visuals and artwork is of very high grade, complete with large set peices, huge explosions, large monsters and huge magical battles that can only be called “epic”. Its rare that an TV anime series can capture the grandoise and scale that Shingeki no Bahamut manages, but studio MAPPA pulls it off. The visuals, the art direction and the animation all lend to something truly hits the upper echelon of what is possible in the anime medium. 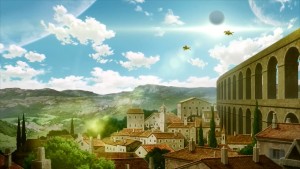 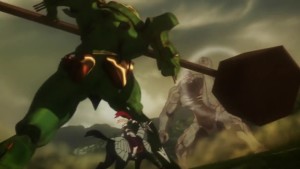 What’s truly remarkable is how a game adaption wasn’t limited by a low budget, or cheap production values, and instead soars into becoming something that truly stands tall with the best of them.

Its not just the visuals either, the music work by Yoshihiro Ike is fantastic if not the best to come out of the fall 2014 season. The voice acting is, as expected, pretty darn great. Hiroyuki Yoshino, Go Inoue and Risa Shimizu do outsounding work as Favaro, Kaiser and Amira respectively. Much like the visual side of things, the sound work is just as tightly and professionally done. 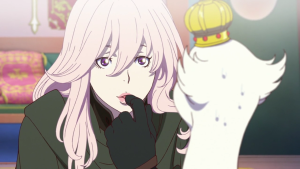 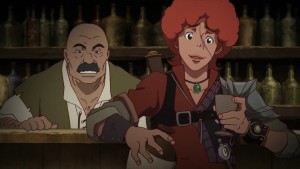 Looking at the series as a whole, Shingeki no Bahamut is a wonderful surprise of a show that nobody really saw coming. It makes for another memorable series, right alongside Samurai Champloo, except with a more powerful and tightly nit plot, and superb production values to boot. If you’re looking for a fun, action packed romp, look no further than Shingeki no Bahamut. We award it an A Grade.