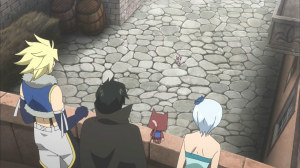 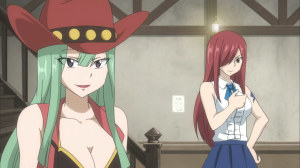 Better late than never right? As usual, I apologize for my tardiness with this post, offline life certainly isn’t kind to a final semester college student. While its been nearly three weeks since I’ve written about (or watched) Fairy Tail, I can say that I’m glad and thankful to have this series airing. With Naruto heading toward a conclusion soon enough, and the Hunter x Hunter anime done, there’s very few traditional shounen franchises like Fairy Tail left around the anime landscape right now.

Its great that these two episodes were breather episodes that focused on world and character building. Too often in series, we only see characters when something big is going on, when they have some challenge or trial that they have to overcome. Yet, I think if these two episodes prove anything, its that Fairy Tail is just as interesting when its a normal, quiet day. 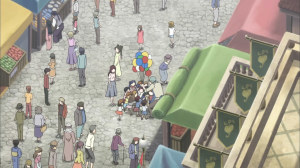 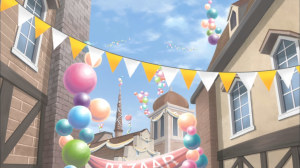 If you’re an anime fan, you’ve probably often asked yourself which anime world you’d actually like to live or at least visit. Personally, I’m inclined to say that if I had any magical power, I’d love to live in Earthland. Its not just Fairy Tail that’s an interesting guild either, as episode 28 showcased that the new Sabertooth can be just as endearing and heart warming.

First thing first though, and its definitely true that this episode revealed who Yukino decided to go with. I can’t say I’m surprised, given that well, Sabertooth was full of the people she had been comrades with. That said, while Yukino is definitely a lot more forgiving than she should be, I’m slowly starting to come to terms with the idea that Yukino does belong in Sabertooth. Her interactions with Sting in particular, almost make her out to be the number 2, or even the “mother” figure of the guild. 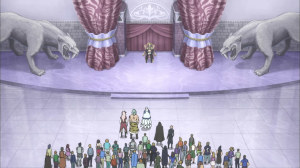 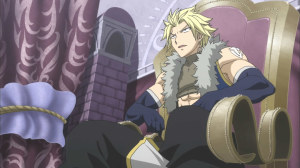 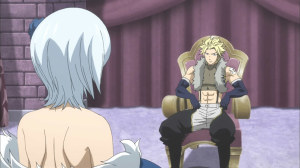 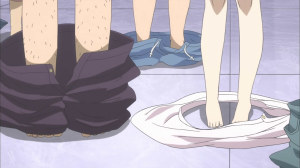 That said, Fairy Tail, and Mashima-sensei (I’m assuming this was in the manga? Manga readers correct me if I’m wrong?) really went for a low shot with that whole Sting asking Yukino to strip joke. I was this close to popping a vein when I saw that, and sort of started to approve when everyone else stripped down as well.

In a way THAT would’ve been the way to apologize to Yukino. If everyone went through the embarrassment, maybe, I think they’d be even. Of course, its true that I’m a lot more rilled up with what happened to Yukino than Mashima-sensei himself, and sometimes that’s just how it is. The pool joke was a bit of a low blow, but still, it showed how far Sabertooth had come along as a guild. 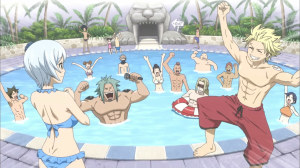 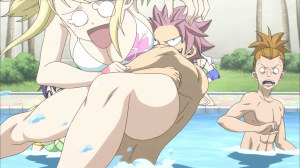 On top of that, the interesting parrallel to Fairy Tail was nice. Seems like both Fairy Tail and Sabertooth think having a pool in their guild hall is a good idea, and I’m inclined to agree. This is one of those moments that leads me to think that being part of either guild, and just living in the world of Fairy Tail, would be an awesome experience.

Frosche little quest was pretty cute as well. I’ve never really cared for Sabertooth’s two exceeds, but this episode did kind of make me more interested in them. It also speaks to Mashima-sensei’s strength as a mangaka, that I’m more than game for seeing most of the screen time of an episode be taken over by a guild other than Fairy Tail. 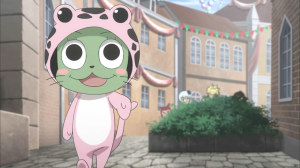 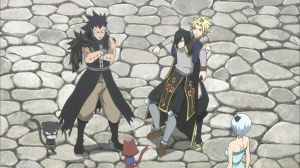 And yes, there were cameos from all of the Fairy Tail members, but that only sweetened the deal. It really did feel like a visit to the world of Fairy Tail on some random day, and running into every colorful character that the world inhabits. 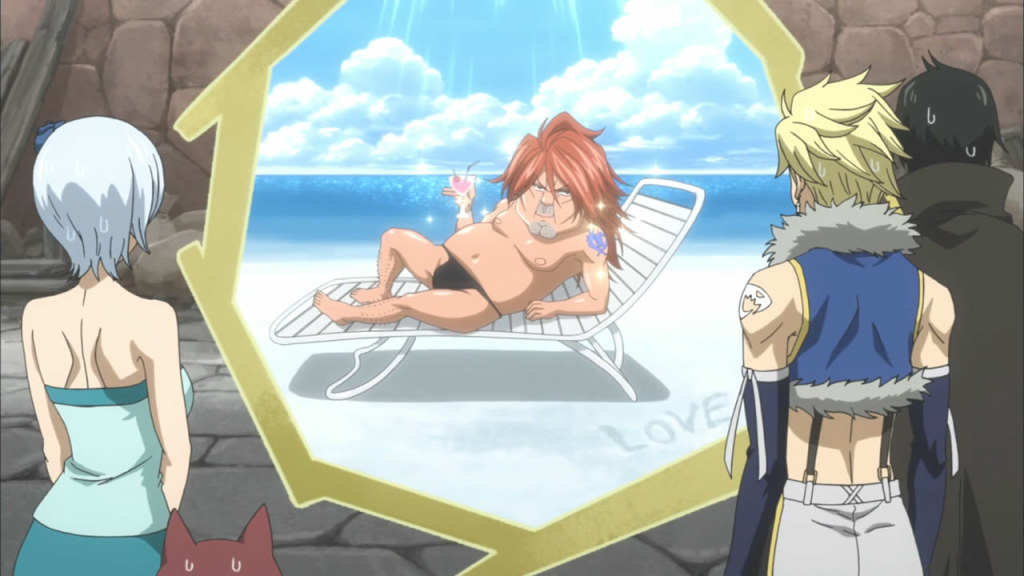 Well… every character except Ichiya. My God… That man needs to learn about boundaries and general social etiquette. Rogue punching that guy once was hardly enough. The Ichiya jokes are increasingly NOT my cup of tea, and its for that reason that I probably don’t want a character building episode for Blue Pegasus. 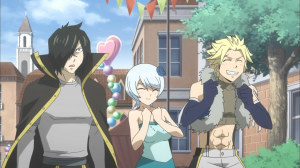 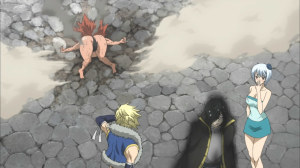 At the end of the episode though, I did feel like Sabertooth is coming to be another interesting guild in an already huge cast of interesting side characters. A part of me just wants the fillers to do something like episode 27, and just show us random bits and pieces of Earthland that we wouldn’t see during an intense arc.

Episode 28 was an even more surprising and interesting episode than 27 though. It chronichled Erza’s first meeting with Bisca, and how Bisca eventually came to join Fairy Tail. The meeting was as rocky as you’d expect, and Erza pretty much taming a wild Bisca made for an unexpected twist. 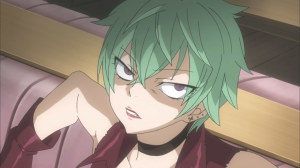 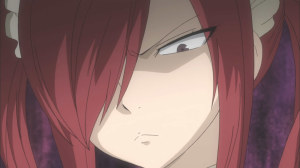 As soon as we saw “Moulin Rogue” I was pretty much guessing it was Bisca. Learning about how Bisca came to join Fairy Tail, however, was just one of those nice little tidbits that I think a filler or breather episode should be. If Fairy Tail just did character back stories in animated form for half a year, I would totally, totally eat that up.

There are just so many Fairy Tail characters that we simply don’t get to see too much of, and revealing their backstories would be an epic way to pass the time. It also highlights those characters in a way that makes them truly memorable. 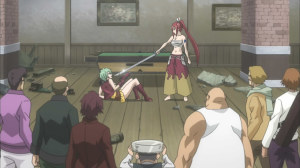 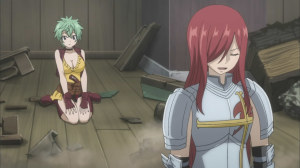 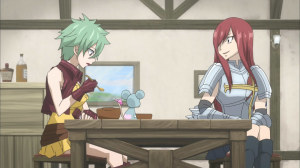 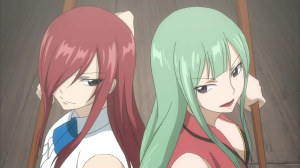 The sister like relationship that Erza and Bisca have? I really really believe it thanks to the episode. It elevates a character like Bisca from simply being a supporting character, to someone that really is tethered to the main cast.

This episode, and this little story is such genius that I’m just… I’m surprised Fairy Tail hasn’t done this more often. Too often in Shounen do we focus on the main characters or the main villains, and this series dedicating time to its side characters is really something that I wish we’d see more often. 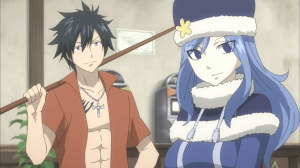 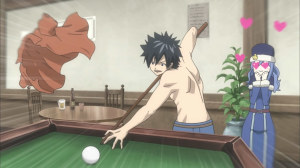 On a side note, I would like to comment on Gray and Juvia again, at least a little bit. In the 28th episode particularly, they really did come across a lot more as a couple. It was nice to see that Gray was hanging out and doing jobs with Juvia. They also seemed a lot closer, and while I’m sure Gray has enough baggage to be “forever alone”, this is still a pairing that I’m rooting for. And again, as I’ve said, the “Juvia is jealous” jokes can still work even if they ARE together.

In many ways, I do feel like it would make more sense for these kind of pairings where the focus isn’t just on Natsu, Erza, Gray, Lucy, Wendy and the Exceeds. Then again, I suppose Fairy Tail has the problem of having too many intriguing characters to juggle. Not the worst problem to have though, all things considered.

So yes, these two episodes = good. Great even. Some parts of episode 27 seemed a bit hit or miss for me, but these two episodes were very much cases of “the good little moments” that I’d honestly love to see more of in this series. 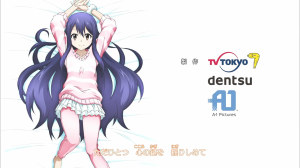 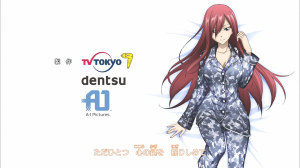 Yep… Them Daikamaru ads still going. A bit surprised that Wendy got one too, but I suppose there’s enough lolicons around for that sort of thing?