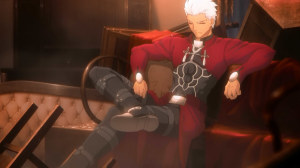 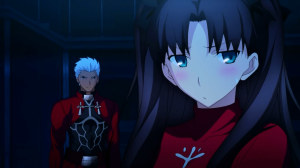 Well here we go. For me the first episode of a main Fate series really has a lot of hype and anticipation behind it. I will admit to not being the most knowledgeable about the universe. I mostly have just seen the anime versions that have come out and that is about it. But I’m still really looking forward to this show and the first episode did nothing to dampen my expectations. Talk about a huge way to introduce yourself though, a massive 50 minute episode XD. If they can keep things this entertaining throughout then I think we’ll have one great ride to enjoy. Going to be a difficult experience in a sense than covering the Prisma Illya series was.

I think this was the perfect way to start off. Seeing Rin’s summoning of Archer and her first battle in the Grail War. I’m going to try and keep it as lacking in spoilers as possible and just treat each episode like I have no idea what anything means. Maybe a tricky approach since this kind of intro leaves you wishing you had some more knowledge. Kind of just thrown into an unusual world and left trying to make sense of it. 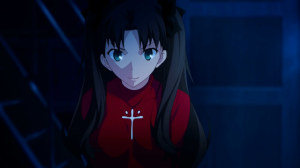 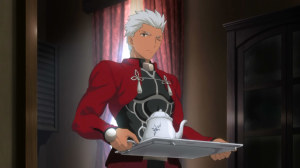 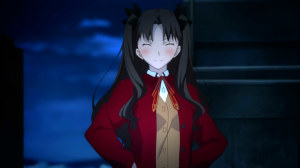 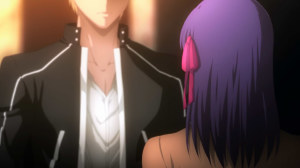 The focus is kept right on Rin for what is basically the prologue for this series. But that makes sense since she is a part of this world and has the most understanding of what is going on. She’s gotten herself involved in a great big battle for what apparently is an all-powerful wishing device. No offense to anyone, but we’re talking about a super tournament for dragonballs XD. From what we saw in this episode these battles will get pretty serious. A secret war where anyone who is unlucky enough to find out what is going on…basically will get wiped out.

I will say Rin was pretty entertaining throughout the episode, so having a lot of focus on her is not going to be a problem for me. Definitely knows how to play innocent with a smile that pretty well screams that she doesn’t like you. That Shinji character managed to be annoying enough that having Rin basically say she doesn’t give a damn about him had me smiling. She just has a good personality. Someone who is clearly isolating herself perhaps because of her situation. Getting involved in a deadly tournament isn’t the best time to be hanging with friends. 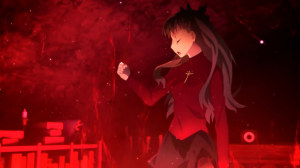 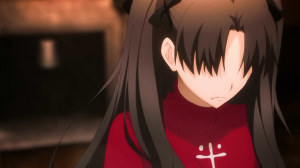 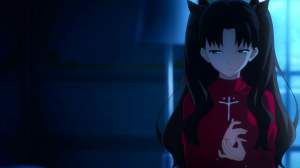 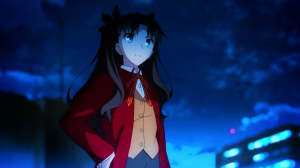 The summoning scene had some nice weight to it. You can tell they are getting a pretty decent budget for this series XD. On that note I really do like the art style they are going with and the animation. Can get the feeling of how much they are drawing from the source material there. But anyways, it was a good scene and lead to some great interactions with Rin and Archer. It’s really something how focused Rin was on summoning Saber, had a 50/50 shot with the classes left, and yet still got Archer. Of course, I’m not sure how upset one should be. A swordsman class sounds cool and impressive, but is that really the biggest deal in the world? From what I can see all these people are pretty powerful and have their own skills. It wouldn’t be much of a competition if one class alone was so overpowered that nothing good could come from it.

Just those scenes with Rin and Archer were a lot of fun to watch. Rin actively getting so upset about messing up the summon timing and how Archer had such incredible cockiness. They just had good chemistry and I could enjoy a show just with them talking. Archer initially just pissing Rin off so much that she used that over the top command spell. Both of them seem to have plenty of confidence though. Rin upset when Archer acted dissatisfied with her early on and Archer upset when she considered summoning him instead of a Saber as a disappointment. Just a very nice moment for what I can only call Team Red XD. 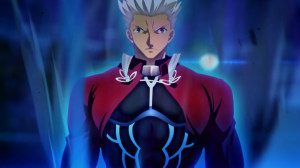 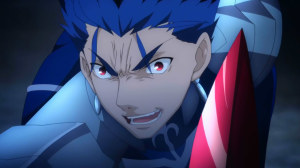 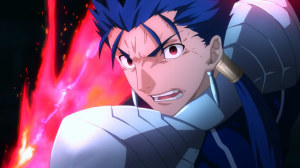 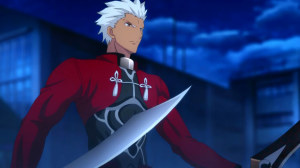 The first action scene was also pretty well done I think. Rin really using her skills just to escape the danger that Lancer initially presented. You can get the feeling for how powerful these beings are that someone like Rin has to really push herself just to try and escape. That first fight also just giving a feel for what Archer is capable of. So much mystery surrounding this guy out of the gate. Summoned as the archer class, but seeming to focus on swords, constantly summoning the same weapons after they are destroyed or knocked away while Lancer was just using that one lance the whole time.

Things were getting pretty close at the end of the fight there also. Lancer clearly ready to unleash one hell of an attack on Archer. It’s hard to tell if that guy is just always calm or has tricks up his sleeves. Whether or not he was actually going to get killed there is hard to say. If so he was being pretty relaxed about it. But it didn’t seem like he was reading some counter either. A lucky break either way that he escaped having to deal with Lancer. Although in the end Rin trying to be a good person put them at the tip of the sword of the Saber class that Rin was so obsessed with. 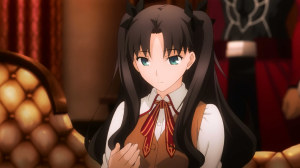 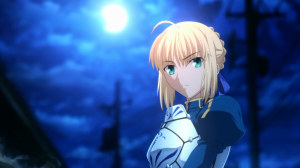 Overall I think this was an outstanding first episode. The action was good, the characters were likable, and I’m really excited to see what comes next. I really wonder though if Rin is suitable for this kind of conflict. She doesn’t really have a huge goal in mind and is just taking part in this seemingly out of family obligation. Just seems like having a big heart when it comes to the innocent bystanders is a risky thing when it comes to a conflict like this. Either way, I’m definitely up for covering this show and look forward to seeing how the next episode shapes up.
Score: A+