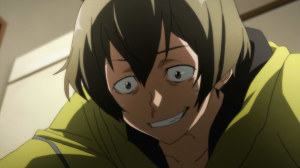 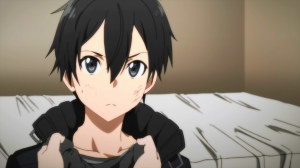 I would say that this arc turned out to be pretty good. I’ll admit missing the tone and circumstance of the first arc. But, since the story is going to be more about the interactions with different virtual worlds that’s just something I’ll have to get past. For what SAO is, this was a really good arc. I enjoyed following the story of Sinon through this arc and at points really got into it. Wasn’t perfect, but it was entertaining at the end of the day.

This really was mostly aftermath. They couldn’t drag out the conflict with Shinkawa for too long. That lunatic just had to be put down and moved on from. Since I expect the focus to shift (I don’t want to know what will happen next), this was a good farewell from the spotlight for Sinon. She’s bound to get absorbed into the harem with the rest of the girls, but she stood out as an interesting character who had gone through some pretty traumatic stuff. 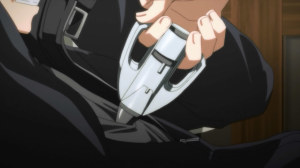 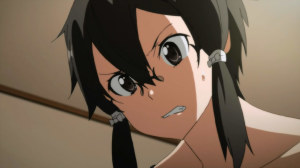 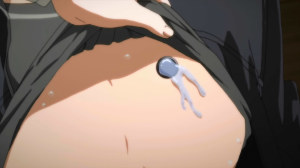 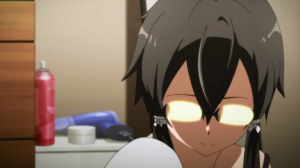 I will just get the negatives for the episode out of the way. The whole sticking Kirito with the syringe scene was done pretty poorly I felt. It wasn’t unexpected that they would try to ramp up the tension with that syringe being used, but I didn’t love how they went about it. There is lucky and there is ridiculous. In that kind of intense situation I can’t see this guy trying to go for a pinpoint shot like Kirito’s heart. I’m pretty sure that stuff will work no matter where you stick him. Going for the center made sense and honestly that’s what they implied with the angle they gave us. Plus, I can’t help but feel the syringe would just slide off the electrode when pressure was applied and Kirito would still get injected normally. My opinion is that they were better off just forgetting the syringe. Have them get into a struggle and Shino step in. Maybe have her knock it out of his hand or something.

As to Shino I thought she did a great job in that scene. The situation was dire and she saved the day. Not surprising that a person would freeze up once a bit of the danger was gone. The focus was on Kirito and not her so it took a few moments to gather herself. Still, when needed Shino got herself up and knocked Shinkawa out with one shot. In the end the girl saved herself and Kirito in this situation. Kirito was a helpful distraction though XD. 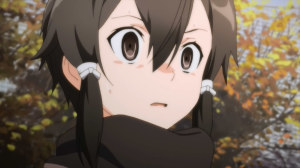 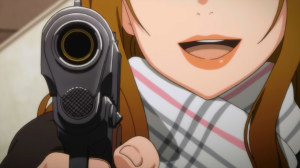 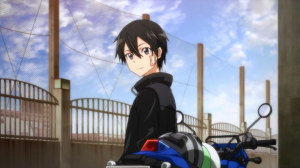 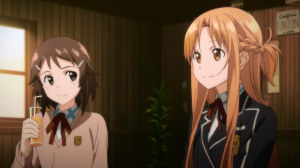 This episode was all about giving Shino some closure after all she’s been through. Facing off against the bullies with no backup was nice to see. It wasn’t like she just simply owned them going into a Sinon mode. She took some strength from that, but it was a tough struggle for her. She had to really struggle against her own emotions and honestly lucked out that the bully was too stupid to release the safety. Regardless, that was Shino’s moment of triumph. She showed that they weren’t going to easily intimidate her.

Though I’m not so sure she’ll be able to dodge the consequences of Kirito showing up like that. I’ll give the guy credit, he knows how to rock a cool factor XD. Showing up like that should have an impact on Shino’s popularity. I guess there was no answering honestly to the question though. I mean saying “nah, I’m in his harem” wouldn’t sound quite right XD.

I was a bit surprised that Kirito glossed over his relationship to Asuna. I get that the mood would have been affected, but really couldn’t he have let her know that earlier? Before/after talking to that government guy there was probably a moment he could say “yeah, I’m kind of dating someone.” The response when she does eventually find out should be something, though I guess we’ll never actually see that. 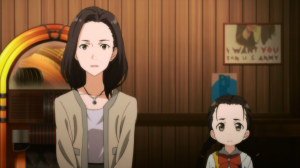 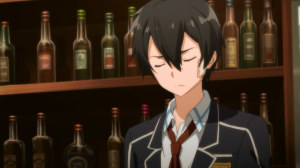 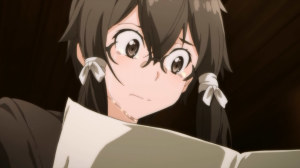 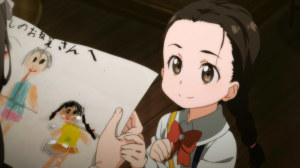 Then of course came the scene with everyone. Not surprised that Liz was used as a bit of comedic relief before the really emotional moment. Honestly, I’m not surprised that Shino was pissed/shocked/upset, etc. at Kirito just telling others about her past. That’s some pretty serious information that shouldn’t be casually shared even to close friends. Glad they were at least prepared for that kind of reaction since she could have easily made it out of there before they could bring in anyone.

While I think Shino was doing a great job moving forward on her own, this was still a good thing for her. It was obviously easy to get lost thinking on the life taken and the trauma that brought to her own life. Dealing with that was fine, but I feel it was right for her to be reminded that she did more than just take a life. She saved her own life and the lives of everyone in that room. While people like her mother may not understand that fact, it’s good that someone finally was brought forward to say “thank you.” Shino is the savior for that family and without her that little girl wouldn’t be alive today. That’s definitely something to be proud of. 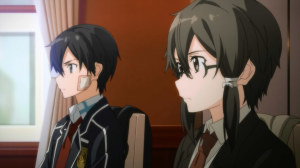 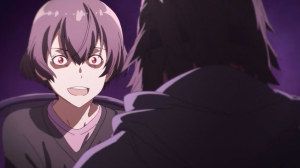 In terms of the Death Gun aftermath, I sure as heck hope that those three don’t just get casually thrown into a medical institute. Shinkawa certainly you could buy being nuts, but the others I doubt it. Plus, the insanity defense almost never works in reality. People are just not that willing to buy that someone is so far gone that they can’t tell what they did was wrong. Shinkawa’s words were definitely from a guy purely nuts so he’s probable. But I think the other two should get full jail time. They knew they were killing people, both in SAO and in reality. They knew that and had enough sense to break into homes and kill someone as part of a complex plan. They are murderers, not insane. If they do get away with it, honestly I’d rather stay in the dark on that.

I’m sure this isn’t the last we are going to see of Laughing Coffin. That guild was full of lunatics who were more than happy to kill people when given the chance. I’m sure they will not be able to hold back their desires to kill when tempted. Plus there is still the other guy on the loose and he’s probably going to cause trouble eventually. 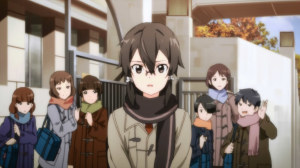 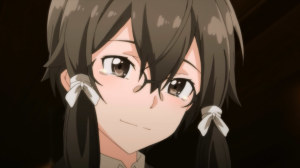 Overall I enjoyed the episode. It was a great chance for Shino to be involved in saving her own life which I appreciate and also to start moving forward. It’s going to be a long road to fully deal with her trauma, but there is some light at the end of the tunnel. Here’s hoping that in the long term she’ll fully get through this. Looking forward to the rest of the second season. Moving on from guns.
Score: A