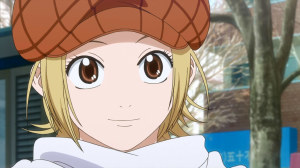 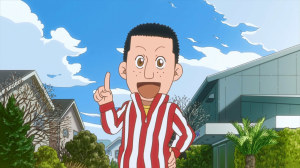 Sometimes the world just gives you everything you could have asked for XD. The big thing coming out of this episode is the announcement of a second season coming this spring. I could really not have asked for more than this kind of development. Well, maybe I could have asked for ungodly animation quality, but that would just be selfish at this point. The show stops on a really high point and we know there is going to be even more ahead of us now. I can walk away from this show in the meantime with a smile knowing we’ll be back.

This episode was great for how it kept some focus on Ei-chan continuing to chase his dream and yet was a huge episode for Ei-chan and Natsu. It really shows how Maruo isn’t just a standard kind of MC. He does have goals that he’s putting everything into reaching, but he isn’t completely blind to the world around him. There’s a girl right there that he very much is interested in and is trying to figure things out on that side of his life. 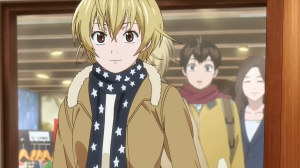 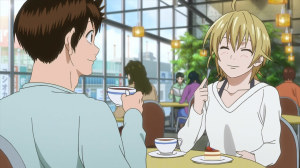 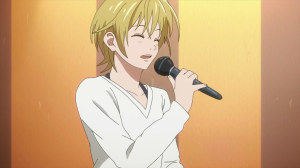 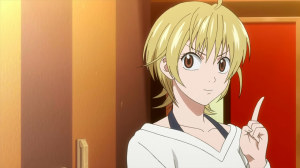 Of course I can’t help but start off with the date like the episode did. This was a highlight of the episode and maybe even the season from my point of view. All hope that Maruo had in trying to treat this as a normal kind of hanging out went right out the window when he first saw Natsu. There’s just no way to treat it as casual after that point. A smart move though to just go ahead and go wherever Natsu wanted to go. It still fit into doing things he wanted to do, but it left things in the hands of someone who is very in tune with her instincts.

This episode really showed why I feel Natsu is a great character. She isn’t just someone passive who is waiting for the main character to achieve his goals. Natsu has her own goals and is fighting her own battles. She also isn’t going to let Maruo have the easy path of finding out her feelings without giving anything on his side. That’s why I loved when she just shut him down and was going to walk out. It is unfair to basically try to have her confess so he can feel safe to do so. If Maruo wants to make his move with Natsu he’ll have to gather his courage and take that step. 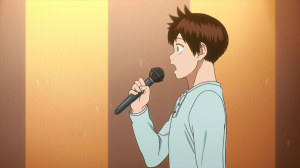 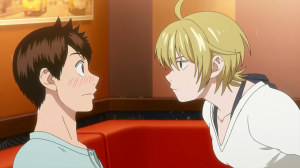 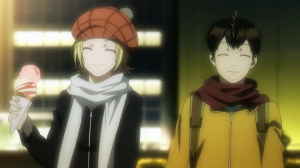 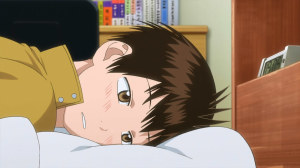 I think a fun thing for this show is that you can believe that Maruo will make that step. He is pretty aware of his feelings and isn’t completely oblivious that she’s reacting positively to being considered his girlfriend. He just has to make his move. Not hte easiest for someone who focused entirely on his books and now has jumped into this huge tennis world.

The karaoke was entertaining though. With how Maruo took on the OP while Natsu took on the ED. Very appropriate division of singing considering those respective parts are really focused on each of them. I’d say Natsu won the singing competition, but maybe just some bias on my part XD.

In the end I just like watching these two spend time together. Two people who have their own lives going on, but certainly care about what the other is doing. Unlike some shows you can feel like it’s a “when they get together” issue rather than an “if they’ll get together.” 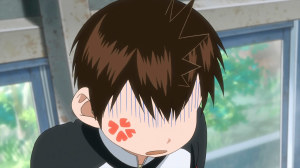 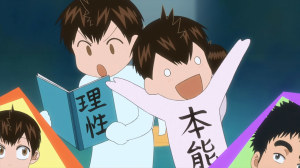 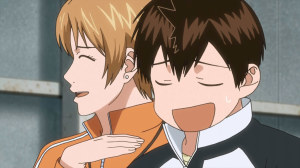 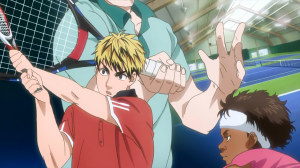 Oh, and yeah there was the whole America thing XD. It really felt like a minor thing even though the date only covered less than half of the episode. The move to America does make sense and really Maruo has to try extreme things if he’s going to improve fast enough to compete with someone like Nabae. Both Natsu and Takuma can attest to the potential growth available going to a place like that. In reality the West has a huge advantage in the tennis world. Going somewhere like that will be a big benefit to grasping that gap between Maruo’s current level and the world stage.

There was a good lesson to be learned as well for Maruo in this episode. Just trying to force himself to train and improve can have a negative effect both on his body and his growth. When things are fun then you can really get into it more and get more benefits from the experience. Both rationality and instinct are essential. Now Maruo has a grasp of that he can probably continue to make huge strides. 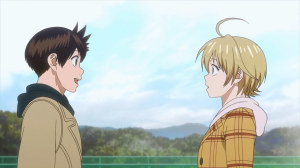 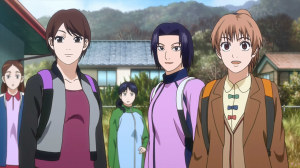 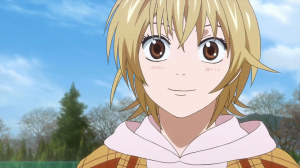 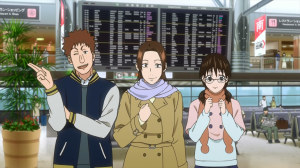 I’d say this is actually the episode with the most changes that we’ve seen in a while. It probably has to do with it being the last episode for the season. In the end though the changes really weren’t all that big a deal and some of them I think honestly made the episode better than it would have if they were more expressly loyal.

The one cut away that surprised me was Maruo talking to his parents about going to America. They basically just cut over that by saying he got their permission. It was a bigger deal in the manga since he had to get his parents to pay almost $3,500 for it. Makes sense since it is such a big tennis facility and then you consider travel expenses on top of that.

The big supporter to let him go was his father though. They did say he could put everything into tennis so of course they’d cover him for this. It was pretty funny with his mother saying his father would cover the whole thing. A cute little scene with the family that ended with them showing support for him. 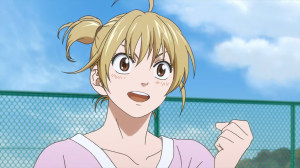 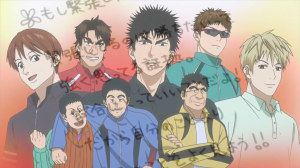 But in exchange for that we did get an extra Maruo and Natsu moment that the manga did not have. They mostly had Natsu texting him and giving some last minute support for what he was about to dive into. That and Kageyama sending a text asking Maruo to introduce him to some cute blonde girls XD. I think the changes made sense on both. It showed that yeah Kageyama is very much still focused on Sasaki so obviously he wouldn’t be asking for introductions to blondes.

And it also brings things full circle with Natsu. Shows that Maruo does think a lot about her and knows that she is nervous when it comes to first matches. Had a combination of showing his feelings and also showing how she was a bit down because Maruo was heading out on this trip. Also served as an awesome fake-out on a confession XD. Even the girls watching the scene were ready for a confession there. Oh well, better luck next season I guess XD. 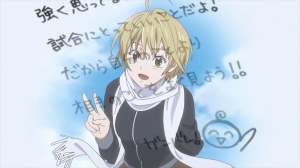 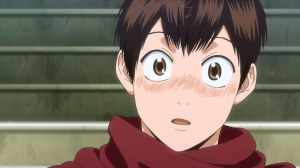 In the end this was a great last episode for the first season. The fact that it tells us there is a second season helps there, but it as also just a s trong episode. It kept a nice split focus on Maruo moving forward and also the romance that is just building up with Maruo and Natsu. Not a bad way to end an episode, I think.
Score: A+ 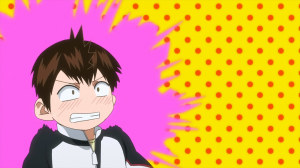 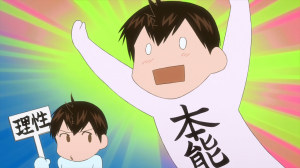 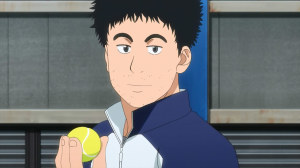 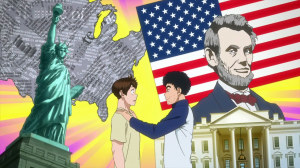 Honestly, I was really worried when this anime was getting started. There was just so much that seemed possible to go wrong. I wasn’t overly sold on Natsu’s VA in the first episodes, there was all this talk about anime original content, and it’s not like they had the most awe inspiring animation team going into it either.

Yet, I can’t say I was disappointed at all. The show really exceeded my expectations about what they were going to do and how far they would go. The show was incredibly loyal and really only changed things for the better. It was one of those cases where the author could add in things that they realized in hindsight worked better or things that just had to be cut for it to fit in a manga chapter. So many times an adaptation gets a “well the source material is better ” feel. This is one of those times where I think the anime can be argued to be the ideal version. It might have some rough visual spots here and there, but the story side of it is the best. 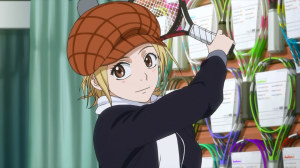 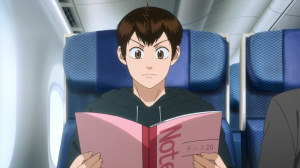 I am extremely excited about the second season coming our way. There is so much material left to be animated. They could do another 25 episodes and still be in fine shape for a third season. They have the advantage here of being able to look at the material and plan for where the next ideal stopping point is.

I guess the key question is how far Maruo can go in the next season. He’s made huge progress from episode 1 to this point. He’s at the stage where it’s harder to make huge progress since he’s already pretty good. But he still needs to get over that hump so he can face guys like Nabae and win. I agree that he’s got to do more than he has been if he wants to not only fight on the national level, but win.

It’s only a break till spring, but it will be a bit sad to say goodbye to Baby Steps in the meantime. I’m looking forward to the second season and getting to talk about this show some more.