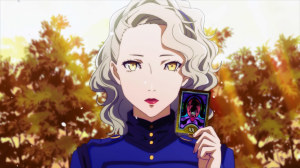 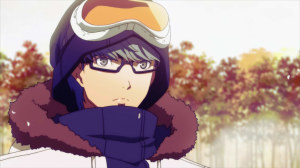 If anyone saw the preview for this episode part of it was definitely easy to see coming. Still, it was actually nice to see Marie again and get right into her dungeon. It’s the first time in Golden period where we got to see the Investigation team in action again and it was nice. One good thing about weaving Marie into so many events with this group was that it was easy to see why this group would go through hell in order to try and save this girl. This isn’t just someone who is important to Yu, she’s important to all of them.

I did find it nice that Margaret was the one who decided on her own to help Yu and the others reach Marie. This wasn’t something she was asked to do, but rather took upon herself and bent the rules for. I think it shows both Margaret’s attachment to Marie and also to Yu himself. She cared enough about this and knew how important it was to him and went out of her way to make this meeting happen. Even though the risk is grave and the person in question didn’t really want to be rescued. 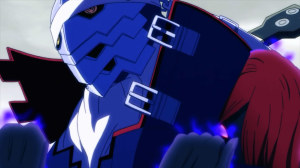 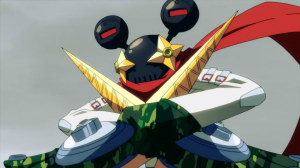 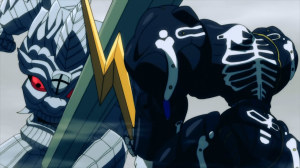 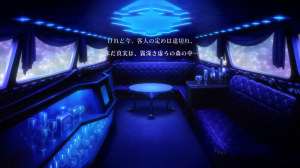 Of course the most hilarious part of the episode came at the end. Not that the group getting annihilated was a good thing, but it was remarkably funny to see the Game Over ending. They really just carried it through to the end which was pretty fun. Considering this game has been all about the NG+, I’m not surprised they decided to do that. Though it does make me curious if they just have everyone pull themselves together or actually revive at a save point XD.

Either way it does reflect how that actually isn’t an easy dungeon to get through. It’s not bad if you prepare and realize how it all works, but it can be dangerous. It really was fun though seeing the team have to really struggle to reach Marie. Sure they didn’t show every step along the way, but they did show enough of the fight to make it clear that this was one of the harder paths they’d had to walk. Probably didn’t help that for some reason they were still stuck on basic personas.

It was also surprisingly intense how quickly they were beaten down when Marie got taken over there and just unleashed death upon them. I’m really curious how they will handle this and if they will reset slightly so they can approach this fight with a bit better chance for success. 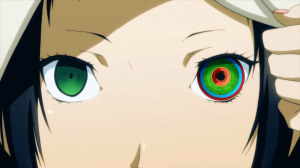 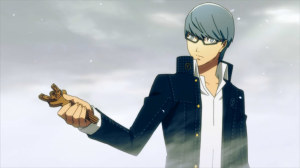 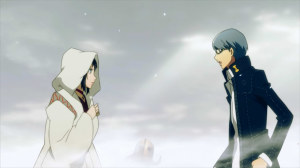 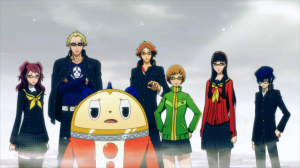 In the end the key part was when Marie was confronted by everyone and trying to figure out exactly why she decided to put herself in this situation. She basically said she came here to commit suicide so clearly the situation is pretty darn extreme right now. It would seem like there is more going on than she was willing to explain as well. Even after all she said she was hiding something out of worry for what they would do. Considering she already threw the spy thing out there this has to be even worse than that. Likely worried that they wouldn’t be able to leave her be so it was necessary to remove their memories and seal herself up ahead of time.

The best part really was when Yu just lost it on Marie. The second best part was using Yoshitsune’s Hassou Tobi to beat down some shadows. Not surprised that the group was just stunned silent there. It really was like a lovers spat and makes me feel they will totally go a lovers route with these two by the end. Just going back and forth calling each other morons until they finally separated. I can’t really blame Yu for being pissed since Marie went off by herself to die and didn’t even tell them what was going on. The others were a bit more reasonable in trying to get her to come back with them.

And yeah they did drop the whole spy bomb on the group. The whole time she was being used by the other Sagiri to keep an eye on the town and report ‘the will of man.’ Now she’s hidden herself away here for a variety of reasons. It certainly must have hurt that she was being used as a spy to hurt the people she cared about, and I look forward to seeing how they react to the rest of her story. 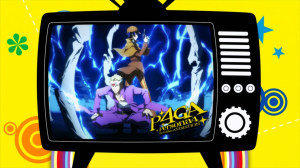 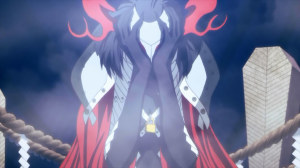 Overall it was a pretty fun episode. It had some of the most action we’ve had and certainly the most group action we’ve seen the entire show. Here’s hoping they can keep things going strong until the end. Should have some good emotional moments left and I seriously hope they don’t skip over the final battle just because it was technically covered in the original show. That’s one area I feel Golden has a good chance to improve things in.
Score: A-