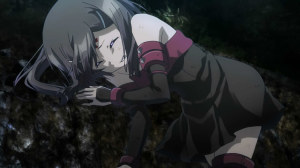 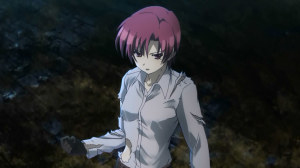 There is nothing quite like taking a break with a show on a high note. I have some mixed feeling about breaking up this second season into two parts, but I’m still glad they are going to animate the whole thing. Maybe they only feel comfortable with this material going in 10 episode bursts or something. Though I guess that they mostly don’t want to go up against the new FSN series coming out. Either way, ending this first part on the fight against Bazett was definitely a good decision. This fight had a lot of good parts to it and everything ended nicely with that Kuro and Illya moment.

I’m glad it was this tough just to get Bazett to call a temporary truce. It literally took everything this group could muster to get this woman to hold up for the time being. If Bazett had pushed the conflict then they really might have gotten killed. At the very least Kuro would have been killed and the rest seriously injured depending on how hard they fought to make sure that wouldn’t happen. 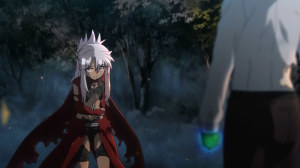 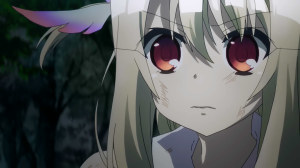 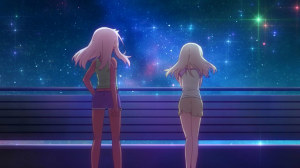 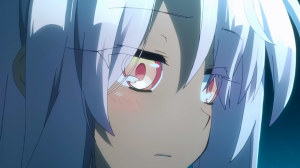 It’s kind of amazing in a sense how far Kuro and Illya have come in such a short amount of time. They literally started out as pure enemies and now were ready to risk their lives for each other. Kuro had a lot of courage, but also has her weak moments. It helps to have someone like Illya ready to go all out since it pushes the fears aside and just has Kuro focus on doing what she can to help Illya. Of course if Kuro wasn’t prepared to get hurt in order to create an opening Illya’s plan would have been a bust. Kind of an amazing turn for them to have such a tight bond by the end.

That last conversation between them reflected that as well. They have different mindsets, but they kind of keep the bases covered that way. Kuro understandably is worried about their future. It’s all pretty uneasy right now since Bazett is still a threat and one they can’t beat. On top of that they have a mysterious 8th card to worry about and who knows how easy that will be to deal with. It could lead to their ticket to dealing with Bazett, but maybe not. Illya though helps bring the mood back up which I think Kuro needs. Just focusing on the fun stuff and killing the tension. Sometimes worrying too much can hurt more than help and it’s nice to relax now and then. 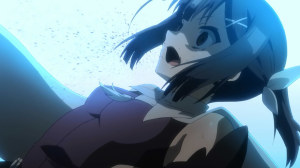 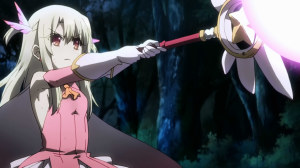 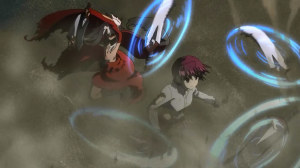 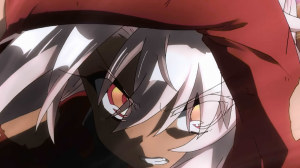 The fight itself had some good moments and I enjoyed it. I don’t think it had the same ‘holy crap’ feeling that the first appearance of Archer Illya last season had, but this was still a good fight. I really liked that last effort at the end there. You could see both that Kuro did get a good shot in, but she also took a serious hit to create that opening for Illya. The show isn’t full of blood, but they did manage to slip that in there to make clear this was a serious moment in the fight.

I give Illya full credit for her creativity here. She realized what Rin had set up and gave her all to make it happen. Using include to create a distraction so she could attack was perfect. But I love how it took multiple people to make that work. Illy had to give her all, Kuro had to make an effort and in the end even Luvia got a bit of revenge there. That nice snipe shot that knocked Bazett back just enough for Illya to get the win.

And yeah, the scene with Miyu taking that hit from Fragarach was pretty rough. Talk about the ultimate counter punch. It’s very existence at worst makes it impossible for her enemy to use their best stuff. They have to take it cautiously, but even then that only helps the enemy that knows about her ability. She can just lure out that powerful attack and then instantly win the fight. It’s totally hax, but it works. 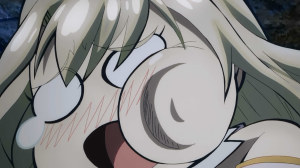 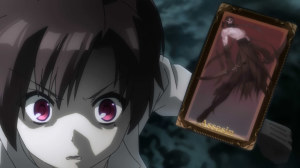 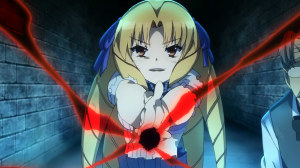 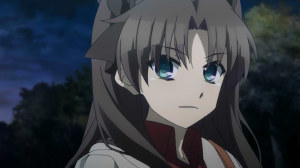 That was a great move by Rin though to just get them a win by pure bluff. Of course it makes me wonder if the Kuro situation was also just a bluff this whole time. You could argue it was a less effective spell and there is evidence for that. The pain Bazett felt was less than what Kuro felt earlier. But Illya had gotten healed up enough by Ruby to fight so maybe it was just a dull pain at that moment. Maybe the death thing was a big bluff for both cases. It’s a great bluff if so since most wouldn’t risk their own life to just kill someone.

It really took a huge effort to just get that temporary truce and I think it is alright to consider that a win. They are alive which is more than they might have been able to say otherwise. Also now the big mystery comes up about this card. That would explain why things hadn’t improved by the first episode of this arc, they weren’t actually done yet. Now there’s a mystery that has everyone a bit confused. The most interesting thing probably is that Miyu was the one really shocked. How much does she really know about all this? 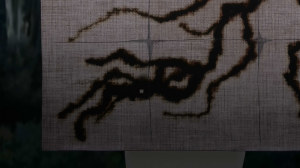 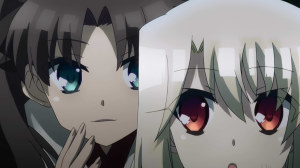 In the end it was a strong last episode for this first part. They managed to fit in an entertaining fight over the past two episodes and still have some time for the characters to calm down a little. They still have a major issue ahead of them, but for the moment they made it. You know things are alright when Rin and Luvia have time to remind themselves that they hate each other and Miyu is more focused on the details of Illya in bed XD. I can’t wait for the second part of this show and here’s hoping it’s a winter series so we can get back to it quickly.
Score: A+ 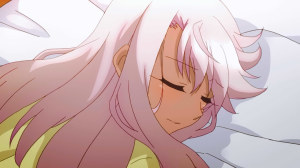 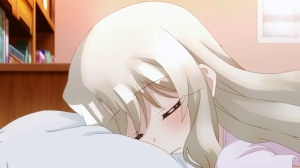 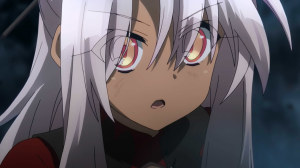 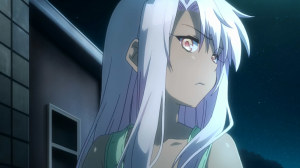 It’s somewhat hard to write up impressions for a show that is only really half over. But, I’ll go ahead and try to anyways XD. I think this was a pretty successful follow-up to the first season of Prisma Illya. There was more material available so this time they didn’t really need to do much filler and could just naturally extend scenes that could use it. I think that made the story stronger overall.

The key introduction was definitely Kuro though. Despite being new in so many ways she really got involved in things pretty quickly. Starting out an enemy out for Illya’s life and eventually turning into one of their most reliable allies. While her appearance was tied to Illya losing a lot of her firepower, that actually helped Illya become more efficient.

I just felt Kuro overall was a really entertaining character. She caused a lot of havoc with her combat and knock out kisses, but there was plenty to her. That backstory was pretty rough and can understand how someone could come out of it angry and confused. There was plenty of pent up anger there and being a bit too immature to be able to do anything but lash out. Once she stabilized it was a turning point and the only real issue going forward is avoiding the card collection that is going to be coming their way. 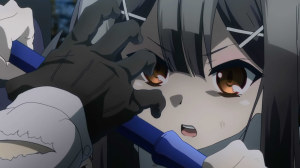 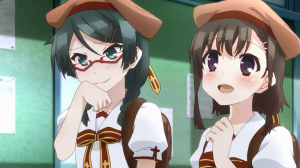 I think out of any of the main cast from last season Miyu probably took the hardest hit on focus. Kuro pretty well demanded screen time and Illya wasn’t going to take a step back since she was directly involved in that. At least Miyu did get a good chance to make her mark on the show with that Miyu Saber vs Kuro showdown. She even got a chance to make a good combat entrance with going Rider on Bazett. She may not have been too involved in other things, but she was key for the big battles we’ve had so far.

There was a lot of moments I could just have fun watching in this first part. The cooking showdown was fun and it was ironic to see how Shirou still managed to be a harem lead even when it wasn’t his show. Although he certainly takes a hit for that right being near the bottom of the family totem pole. 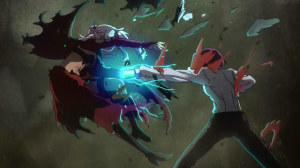 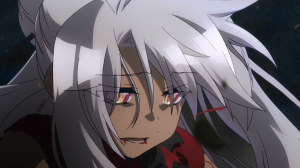 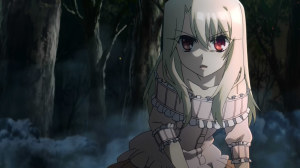 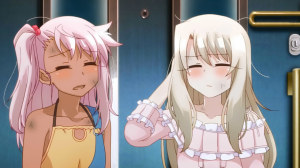 It was interesting as well how they managed to continue deepening the mystery on certain things. I still feel Miyu took a step back in terms of focus, but the time she had was important. We got all this detail that makes it clear soemthing strange is up in her backstory. A brother that is similar to Shirou, the same birthday as Illya/Kuro, and finally having the most shocked expression about the 8th card. She is definitely not a normal person, but what it all means is still unclear.

In the end, I had a really good time watching this show from week to week. The introduction of Kuro and the more consistent presence of Irisviel really added to things. All that and there is still another 10 episodes left for 2wei. Obviously there is also a third manga arc they could dive into as well so we may have plenty of Illya left ahead of us. For now I can say goodbye to this series and wait for the continuation.