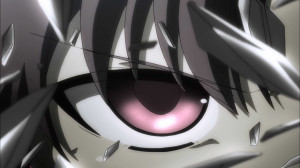 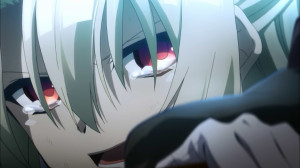 If 2wei is going to go out in 10 episodes like the last season, it is apparently focused on making sure it ends with a bang. This was a truly entertaining episode from an action point of view. This episode started off a bit slowly with the recap, but it made sure to give more than enough action to make up for it. The main trio all had a little bit of fighting that they got to do in this one. Kuro, Illya, and Miyu all had their crack at Bazette with varying degrees of success. Perhaps it only proves how much of a monster this person is.

Kind of an incredible thing to know that Bazette did go around beating the stuffing out of the opposition and collecting both Archer and Lancer on her own. It’s no wonder of course considering how this episode turned out. She was able to put up a great fight against Kuro and even Miyu had to be careful for a few moments there. We got the understanding from the Miyu and Kuro fight, but it was pretty well displayed here. Fighting someone who can think and rationally fight is completely different from what they had to deal with in the first season. For both our group and Bazette they are facing opponents who can rationally consider what they are doing and the best way to prevail. That’s certainly not an easy thing to go out there and win. 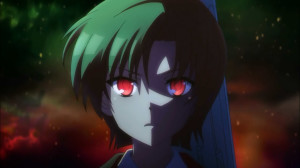 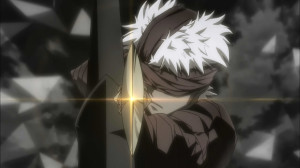 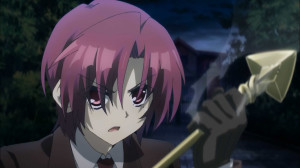 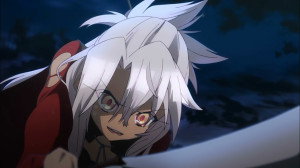 This episode was all about the action and I liked the little things in this episode that made the action flow well once it got started. Quick reaction on Kuro blocking that first hit by Bazette and having that speedy transformation into Archer mode. Certainly can see the difference from any of the opponents they faced in the first season. Bazette is extremely intelligent in how she approaches her fights making use of her environment to gain an advantage or protect herself. I mean literally using a tree to take a shot at Kuro and then follow up with a powerful sweep with that tree.

Unfortunately for Kuro’s portion of the battle she was facing someone who had experience fighting against Archer. Even if Kuro is more intelligent than the version of Archer that Bazette faced, some tactics can overlap. That element of surprise pretty well cost Kuro early on since she took that counter and was put in a bad position for the rest of the battle. 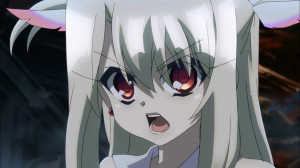 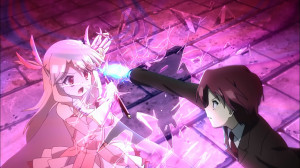 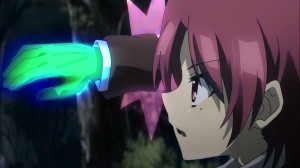 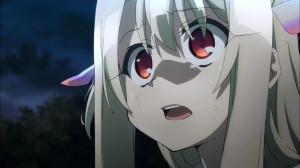 Illya actually put up a good fight herself there against Bazette. She used her head there and made use of her lack of pure firepower. Not having that incredible blasting capability of before is forcing her to use her head more with those shields. Using her magic in a way that isn’t so standard as compared to before. It had some good effect especially when she tried to stop Bazette’s arms by locking them down. Damage wise she couldn’t take those hits for long, but if they can’t actually hit anything then there isn’t a problem.

Of course Bazette shows why she’s one of the top enforcers out there. Talk about an insanely powerful person in a combat situation. Just using a pure wall to block Illya’s vision and then hit her with a blow that couldn’t be cancelled out. Even with the extreme physical defense that Ruby gives her, that was a crazy hit. Doubly bad since it only added to the damage that Kuro was currently shouldering there. Even though the Archer card boosts up her physical ability that’s still a lot of pain to be carrying. 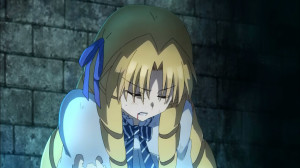 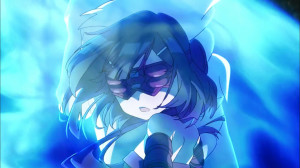 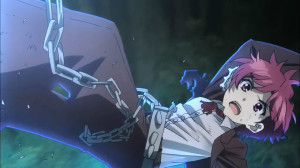 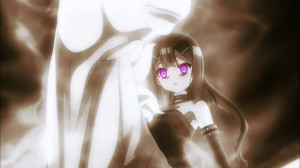 Miyu of course made the episode when she went full Rider there. Shows the full power of Rider being able to attack with such force and charging speed. It’s bad enough dealing with the power, but the mobility isn’t anything to shrug off either. For someone like Bazette who is purely close combat that isn’t a good matchup. Props to Miyu for doing as well as she did even after Bazette managed to get up on the Pegasus and prepare to attack. The one who has the superior riding ability came out on top there.

Of course Miyu does have a tendency of being hotheaded and stubborn and it might burn her here. Whatever is going on both sides are preparing their big attacks and it could get messy. Cool move though to make use of the gorgon eye to lock down Bazette’s movements and prepare to finish it. Miyu wasn’t messing around there. Hard to blame her since Rin and Luvia can only escape certain death so many times without you figuring they have died.

Curious as well to see what Rin’s preparations were all about and if that can help them end this safely. Luvia certainly isn’t in a good condition, but reflects how much she trusted Rin to make the most out of her distraction. 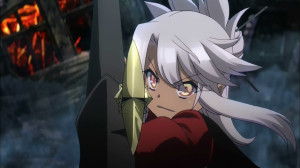 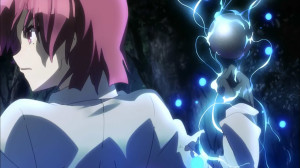 This was a really entertaining episode. The action was great even if it took a while for them to actually get to the combat. Sadly it looks like next week will be it for the moment. I expect to get a 2wei part 2 after the current FSN adaptation takes a break. Regardless this was a good episode and I hope the next one will be equally strong so we can step away from the show on a high note.
Score: A+