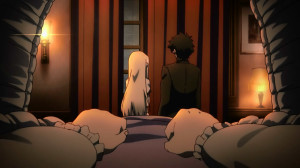 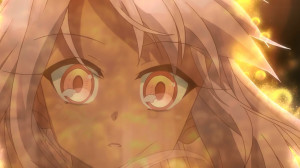 While this show doesn’t have action all the time, it comes through when it does. Of course this episode wasn’t all about the action and had some pretty strong emotional moments in there. This was the big episode to get the truth about Kuro out and have everyone basically figure out where they stand on this. The truth also helped build the universe around these characters and show how this world is very much similar to the regular Fate universe, but with very key differences in how events played out.

Seems like we’ve got a world here where the Einzbern family appeared to be working on their Holy Grail alone for a long time. The incident involving Irisviel and Kiritsugu was probably the first war because it took so long for the Einzbern’s to figure it out. One would suppose a big difference here is also that Kiritsugu decided that he was going to protect his family above all else. Considering Iri said the Einzbern’s were…gone, one can presume how that all worked out. Probably obliterated them and thus anyone who really knew about the Grail was also dead. Then they went ahead and sealed Illya’s memories so that would put an end to it. 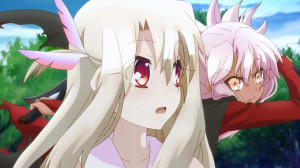 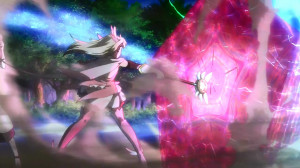 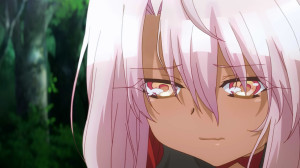 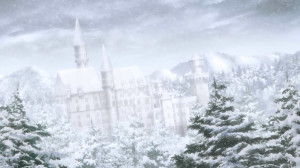 And this episode reveals how the plans of Illya’s parents caused more harm than they might have predicted. They got what they wanted in a sense. Illya grew up a normal girl away from the mage world and no one knew the truth. But the reality was that the cost wasn’t just Illya’s memories, which as an infant wouldn’t have been a big deal. But sealing those memories sealed Kuro. Memories are a key part of our identity and who we are. I suppose if we talk about a magical sealing that could in a sense seal that person you are at the time.

When considering all that, Kuro’s anger really isn’t a shock. We’re talking about a young kid who has all these memories but was thrown into a dark hole for a very long time. Acting a little rashly isn’t going to be surprising when you consider that. Her anger towards her parents would be obvious, they were the ones who in a sense threw her away. And her anger towards Illya makes sense too. While it’s not Illya’s fault, she is the one who was given everything while everything was taken away from Kuro. It’s not like it was that necessary if they wanted to give Illya the choice of a normal life. 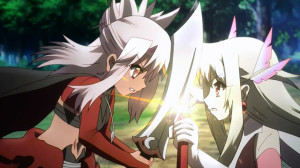 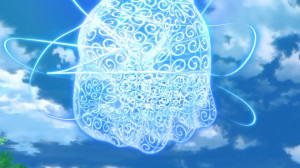 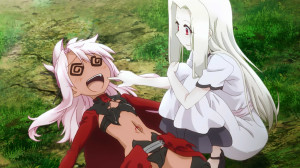 So there you have Kuro completely mixed up and handed a great deal of power to respond to it with. You could see just how tortured she was when Irisviel arrived and she just went after her like a missile. Tough to even keep that composure she usually has. Obviously in there she still loves her mother, but she probably also has a serious resentment towards her for what she did.

Of course attacking in pure rage allowed for things to get wrapped up rather easily. With Illya defending and Irisviel managing to get a devastating hit in, that took care of things in the short term. Curious to see how Kuro would have done given a cooler head, but probably best that things went the way they did there.

What kind of amazed me though was the whole lack of…anything from Irisviel about her actions. She gave some answers, but basically that was it. She didn’t show any rejection of what Kuro was saying nor did she really appear apologetic either. While there might not be much that could be said to make the situation better, doing absolutely nothing is far more damning. Even once Kuro was about to vanish from existence there was literally no movement there. Maybe it was just that the focus needed to stay on Illya there, but honestly it stood out as odd to me. 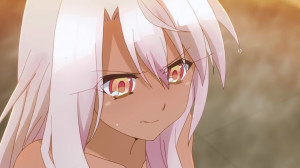 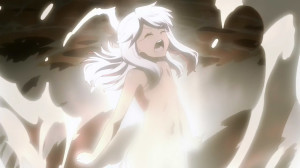 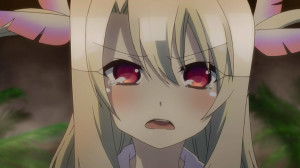 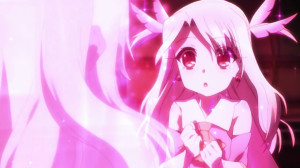 Of course the big moment came down to Illya making a major effort to save Kuro. It wasn’t that she could necessarily do anything about the situation, but she tried and managed to get Kuro to save herself. It wasn’t something that was going to be possible unless Kuro was willing to just acknowledge her own wishes and desires. Unless she was willing to wish to exist it just wasn’t going to happen. Her existence as it was already counted as being pretty miraculous, so might as well tap into that Grail power and use it. In the end it had enough to save Kuro and it seems like she will get a lot of what she had been desiring. Being introduced to the family even if it’s still as Illya’s cousin.

Really that doesn’t matter quite so much since she can now build her own relationships and decide on her own how she wants to live. That itself shows both parties have finally come to accept coexisting. Illya will accept Kuro into her life (though not her trying to take Shirou XD) and Kuro will accept Illya existing as well. 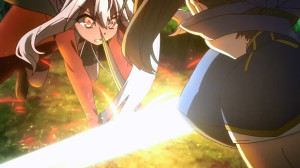 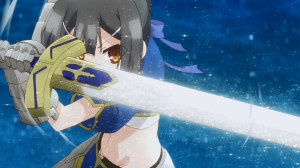 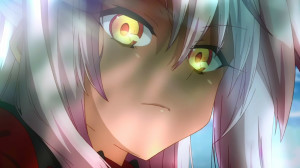 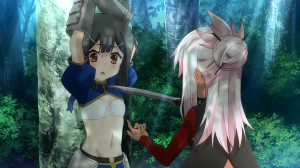 But yeah, the fight between Kuro and Miyu was a lot of fun. Nothing wrong with seeing what those two are capable of. Not that much of a surprise that Kuro came out on top. While there hadn’t been that many encounters she did have the experience in fighting that whole group and still nearly winning if not for one trap. She also had that experience of Illya’s in fighting against all those cards and particularly the dark Saber. There wasn’t much tactical thinking behind Miyu’s attacks, just…attack.

Miyu was right that in terms of overall ability she had the advantage there. She busted up Kuro’s swords and arrows, but in the end a bit of tactical thinking was a big difference. Maybe playing a part as well was an inner conflict for Miyu. While she was resolved to fight for Illya and kill Kuro, she may have had troubles accepting that conclusion. She certainly understood some of what Kuro was experiencing and may have just focused on the attacking side and not thinking as much as she needed. Still turned out alright though. 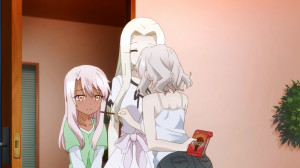 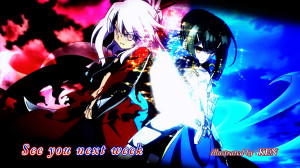 Honestly, it’s probably the best episode for 2wei so far. The mysteries of Kuro were revealed, we had some emotional moments and even got a good fight in on top of it all. That’s a pretty good mix for an episode I think. I had a lot of fun watching this one and glad things turned out alright. Not exactly sure about Kuro’s current state, but at least she’s still around. Still some episodes left though and will have to see what cut-off point they choose for us.
Score: A+