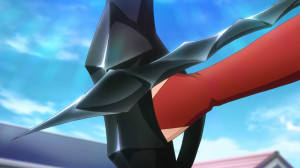 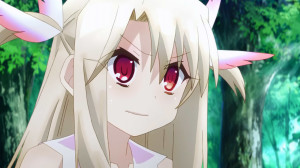 And now 2wei has really arrived XD. While I’m sure the scene that will leave the most impact will be the one between Kuro and Miyu, the rest of the episode did have a lot of good moments. The showdown at the end of the episode in the mission to capture Kuro was actually really well done and entertaining. Though I’ll certainly admit nothing quite has the same impact as Kuro pretty well taking down Miyu with a kiss that would put Sakura Trick to shame.

I think this episode hit a lot of the points that work with this series. It has quite a bit of comedy, some surprisingly good action scenes and certainly some yuri moments that you can’t quite ignore. The only thing really lacking was the heavy dose of seriousness that a few episodes last season had, but I’m sure those are ahead. Also, I guess it’s hard not to consider it serious that this Kuro girl was pretty well trying to murder Illya the entire episode. While she failed in a comical fashion in the end, it was still a pretty serious attempt. 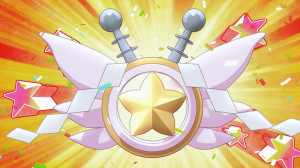 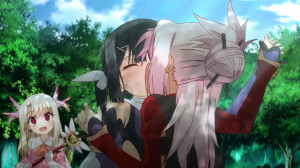 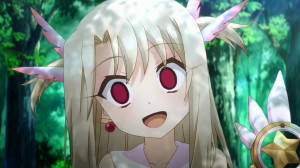 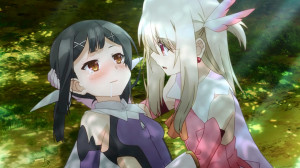 The first part of the episode was pretty funny in its own way. Sure in reality a lot of things were coming close to killing or seriously injuring Illya, but Ruby helped play it up in a lighter tone. Kind of amazing she got to school alive all things considered. I suppose Kuro was on point when she said Illya had pretty good intuition and luck. That combination just kept her out of the danger zone.

The first showdown with Kuro will certainly be memorable for a few reasons. But, honestly it’s mainly due to that kiss. There have been some pretty borderline scenes in anime, but that one certainly will be remembered for a while. I can’t imagine it was the kind of attack that Miyu had been expecting. Certainly with Kuro having that archer card’s strength she could keep a hold of Miyu and push that kiss as far as she did.

They certainly put a lot of detail into it. Though I wouldn’t be the one to comment on every little bit. Was a pretty lengthy kiss and kind of chuckled when you could see Illya just watching with a stupefied expression on her face. That kiss was definitely a one hit KO on Miyu for that fight. Kind of shows Illya’s worry about her friendship with Miyu that the big factor that upset her was that Miyu was going to further misunderstand things XD. 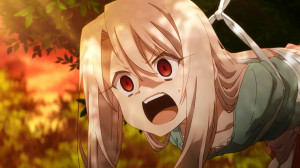 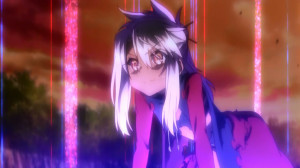 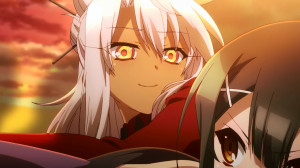 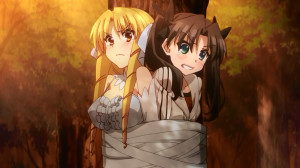 The concern certainly is that Illya suddenly has lost a lot of her strength. She did make up for that by getting more creative with her magic usage, but it’s a worry. Rin is probably on the right track as to the reason. Clearly this Kuro has a major connection to Illya and it can’t be a coincidence that Illya lost strength once she ‘appeared’. I’m sure we’ll find out the specifics as to what is going on sooner or later, but it just means that Illya will have to be careful going forward.

The action when it came to Kuro vs everyone was actually quite good. They really used a lot of tactics from physical wraps, gravity pressure, smokescreens, include with Rule Breaker, etc. You could see Kuro reading what the group was doing and countering in quick order. The fact that she’s bringing up previous encounters and speaking like she knows the group really well, has to imply that she has access to Illya’s memories to some degree. If that’s the case it’d explain why she could predict how they were going to attack her and know what would be needed to stop them.

Really it was somewhat amazing how easily Kuro handled most of the tricks. Beating Miyu almost effortlessly by just tossing Sapphire into the distance and making her unable to fight. But also says something that she never used attacks on the group that could have killed them. For whatever reason her target appears to be Illya herself and no one else. Not that it helps Illya much, but certainly gives some insight into her motivations. 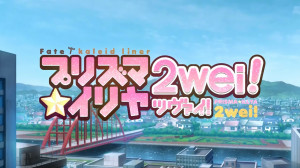 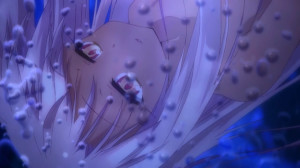 I’m not sure what to say about the new OP. My first impression was that it didn’t overly impress me, I thought the song for the first season was actually stronger as a whole. But it did have a lot of interesting visuals that hint at what is coming. From the apparent showdown between Rin and Luvia while pursuing Shiro, the battles against Kuro and also the mysterious woman we saw at the end of the first season. No doubt that this new character Kuro is going to be central to things and her story should be something to look forward to.

It’s not a bad OP really. The song has its moments and visually it’s pretty entertaining to watch. It does make me eager to see the rest of the episodes since we’re bound to have some great moments along the way. 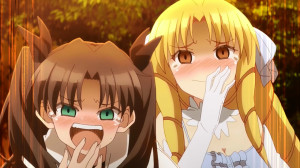 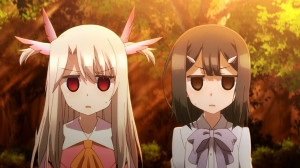 As a whole it was a really good episode. It had a lot of entertaining aspects from the comedy, to the surprise kiss scene, to the showdown and capture at the end. Certainly full irony points that the mud hole that Rin and Luvia fell into in the first episode gave them the idea for the trap to capture Kuro. It was the last trick, but it worked since Kuro couldn’t actually counter it once it had her. The expressions from Illya and Miyu says it all though. Rin and Luvia are something else to be able to fully mock Kuro for being captured by that trap after what just happened to them. No wonder those two have practically been banished to Japan….
Score: A+