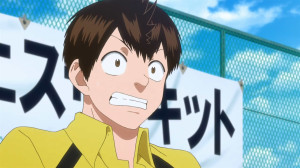 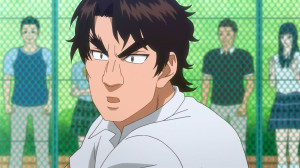 So the match between Araya and Maruo has gotten started. Clearly just from this episode it’s going to be an incredibly tough match to pull off the upset with this time. A kind of frightening situation where Ei-chan basically has to predict everything about what Araya is going to do just to barely catch the balls. Going to be hard to pull off an upset like that, but he’s managed it before.

It’s easy to see the kind of person that Araya is. He’s definitely the type that openly shows his emotions both good and bad. You can see the incredible competitiveness he has and how much he wants to catch up to Takuma and beat him. He’s probably been the #2 behind him for years and this current match is just something he needs to push through. Actually saying he’d give up on being a pro if he can’t beat Takuma just shows how competitive the guy is. 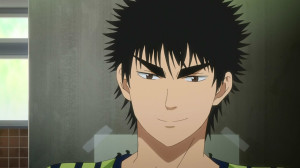 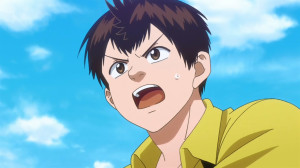 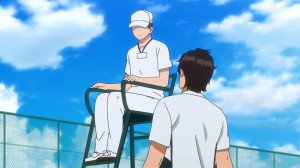 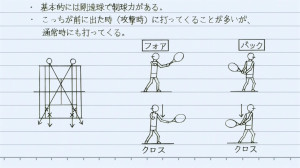 It’s a bit worrying that the whole “anti-Araya” strategy barely sustained Ei-chan through the first few games of the 1st set. Ideally it would have carried him through the first set and then give him a major advantage going forward. Instead the match has only gotten tougher. None of the strategies went too far. Pushing the patience of someone impatient and taking advantage of slow starts is perfectly valid. If Ei-chan hasn’t used anything so far, I have to presume there won’t be any more tips to take advantage of. There may be more weaknesses to Araya’s game, but Takuma probably doesn’t pay that much attention or doesn’t think Ei-chan could take advantage of them at his current level.

Just that sometimes no matter the strategy people can do the unexpected to destroy it. Araya flipping out over that point seemed like just plain whining, but it turned things around for him. Also made clear that officials have pretty limited powers in tennis. In some sports Araya could have been seriously penalized for making that fuss, but here he just had warnings. And really they were warnings about more warnings…At most really the official could start calling a lot of the close shots out, but that might come back to haunt him for future jobs so that’s even questionable. That fuss ended up being pretty valuable so good for Araya I guess. 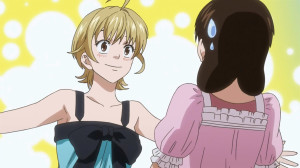 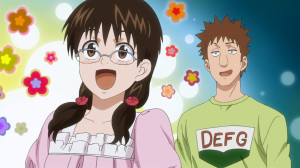 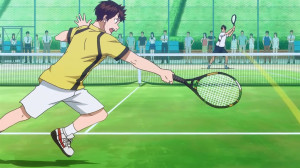 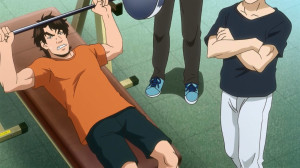 It’s been a pretty good match and you can see Ei-chan using his head and eyes to try and come up with a solution. He’s figuring out Araya’s game and getting closer to making those returns. How well that can hold up I’m not sure. If Araya steps up his game this could be over fast. The score right now is actually pretty bad. He’s already down a game and has to win this one to stay in it. But Araya isn’t going to be broken that easily so it will be a rough match.

We got to see clearly what kind of background Araya has. Ended up joining a club that isn’t really good for individual teaching, but certainly can have benefits for specific players. Maybe a club that you don’t join if you can help it. If they are using cheaper teaching methods then maybe they are a lot more affordable than a place like the STC which I presume has its costs.

I did get a chuckle from the Natsu and Sasaki meeting scene. You can see how tough that girl has it against someone like Natsu. Just incredibly cheerful and energetic. Not going to be easy for Sasaki to catch Ei-chan’s attention when up against someone like that. Might be hard to see her as a rival anyways though since she came there with Kageyama and one could misinterpret things. 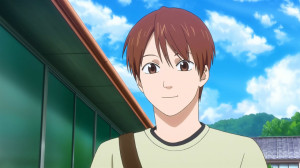 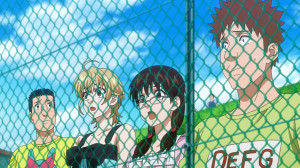 Really not much to say other than it’s been a good match so far. You can see there is a big physical gap that exists between Araya and Maruo. But at the same time the end of the episode showed there is potential for a turn around here. It may take an incredible amount of effort and tenacity, but it’s possible. And we’ve got the same question that we’ve had since this tournament started. How far can Ei-chan really go against these opponents? Has come so far that just about anything could happen right now.
Score: A-