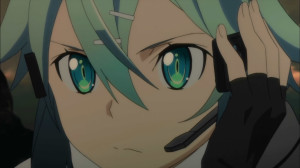 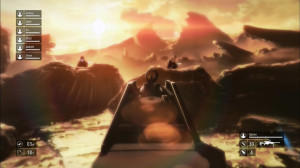 So this episode was basically the tales of Sinon. Probably not a bad idea to handle the second episode like this. We know all we need to know about Kirito, nothing new to gain there. But clearly Sinon is going to be a major character in this arc and its her that needs focus at this early stage. They didn’t exactly go into detail about her history, but they gave us a lot to infer which is fine by me. Show what kind of person she is, not necessarily tell what she’s been through. Obviously she’s been through some rough experiences and the gut feeling has to be a connection with SAO.

It was also an episode to get an understanding of this game and its systems. I’d much prefer just seeing a full blown fight between factions like this than having Kirito basically go through the tutorial for the game. It made clear that this is a game with a variety of weapon types from futuristic to more modern stuff. Miniguns, sniper rifles, blaster guns, etc. It also handled the difference between the PvE and PvP aspects. With these hunting groups preferring to go after players while the other ones being more than happy to just farm for drops from the monsters. 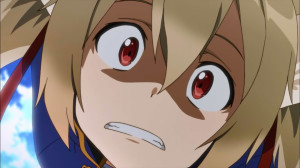 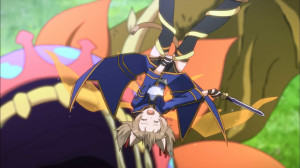 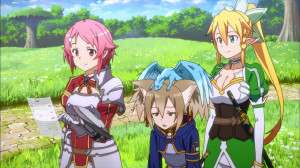 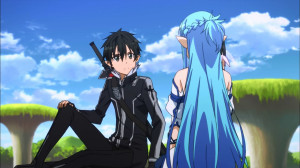 Suppose I’ll give some note to the Kirito harem scene. That’s pretty much what that was all about. All the girls who didn’t get the guy hanging out in the same team. The only surprising bit was that Kirito and Asuna were hanging around there too. I’d comment on them being in a game just to go on a date, but considering the history that makes sense. I’m more amazed those girls haven’t overly moved on. Sure they laughed at the end, but come on guys. Bad enough with Leafa who I sigh at being forced to be a love interest last arc, but the other two should make some effort. Not likely that things are going to implode with Asuna, best to move it on already. They basically lived as a married couple in the game and basically have a kid. Move it along, you can be more than harem girls who have no chance.

It was a bit nice to see that familiar action to be sure. Just some good old fashion sword combat with some flying thrown in since it is ALO. Silica of course remains the same as ever. The girl who gets herself into tentacle situations…At least she often has enough backup to keep her safe there. Guess they were helping Lizbeth out a little in keeping her stocked up enough so she can continue to do her smithing. I guess continuing the same kind of lifestyle in ALO is a good emotional comfort since it’s tough to leave that past behind. 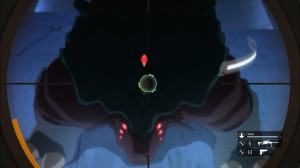 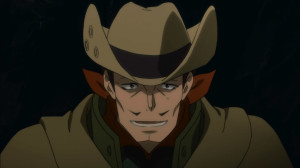 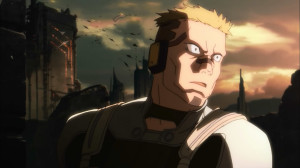 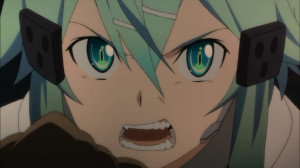 While others are taking it easy, clearly Sinon is hanging tough out there. Got the scene with her basically soloing a boss monster so she could get her great sniper rifle and using it in the fight. Somehow I think if she’s big on doing things alone she’ll get along great with Kirito XD. The combat itself was pretty good. You can see why sniping might be a harder focus since ones the first shots go off everyone starts getting those warning lights. Completely gives away a sniper’s position and makes it easier for dodging. The variety of weapons makes for interesting combat decisions. Have the movement penalty with the minigun, the more monster effective laser weaponry, etc. Have to decide what works for any given situation.

I guess the most interesting thing was Sinon herself. Who knows what she has going on in real life, but clearly trying to keep a distance from that group. And when things got bad she preferred fighting to the last than just giving up and logging out. Better to die in the fight than basically run away and hide from it. Especially in a game where your life isn’t even on the line. At the very least stand strong in that kind of situation even if you’d run from real death.

That last fight itself was just crazy. Giving your all makes sense, but takes someone with quite a different mindset to go as far as Sinon did. Throwing herself off the building, getting her leg blown off and still struggling with everything she had. It was a close fight and in the end she won. That intense smile before she fired the shot and then the shakiness after she logged out. Certainly the most interesting character we’ve got going right now. Hopefully she is handled well through this arc. 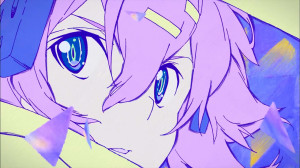 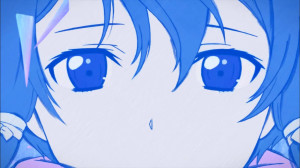 This was basically the Sinon ED. I’m not sure we saw anyone who wasn’t her in there. The focus being on herself, a younger version of her and her current GGO self. It’s a pretty good song. A softer tone, but plenty of energy to it. Certainly ties into the visuals nicely with the emotion its trying to invoke for Sinon. I’m looking forward to getting her story as we go along. 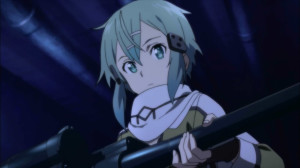 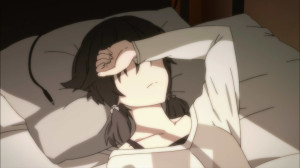 Overall it’s a good return for SAO. They don’t rush things so it’s not a particularly exciting episode, but it’s a good place to start. They did need to set things up and explain why Kirito would get himself involved with this. We have a decent idea about the game itself and I’m sure more specifics will come out next episode. For now we have a villain, a game, a hero, and likely the main girl of the arc. We’re good to go for more SAO.
Score: A-