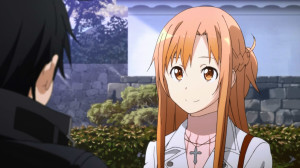 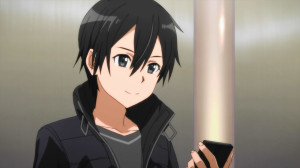 And we’re back! Certainly a nice episode to help ease back into SAO while giving some information about what this new season is going to be about. There wasn’t much action in the game itself yet, but I get the reasoning they introduced things like this. Unlike the first season this is going to a situation where Kirito is going in eyes open. So we need to spend some time just showing the change that’s gone on. Dealing with the past of SAO and the current threat ahead.

It is a bit sad that Kirito seems to be keeping this all from Asuna. I get wanting to keep her out of danger, but honestly he needs to cut off the lone wolf pattern he’s living by. If he’s even potentially putting his life at risk he should at the very least let Asuna in. Keeping secrets about things of that magnitude just sounds like trouble waiting to blow up in his face eventually. No way that Asuna doesn’t find out at some point. And while she wasn’t the most experienced gamer going in, having that SAO experience should make Asuna more than capable of helping him out with this. 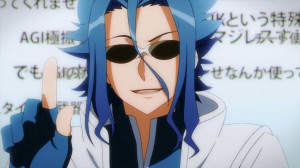 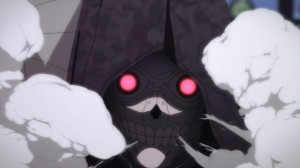 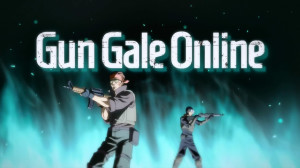 I suppose the place to focus going into this season is the game itself. Not surprising given the name for this MMO, but gun play will clearly be the focus. Not sure how I feel about it, but it should be interesting. Going from pure bladed weaponry, to including magic, to now changing gears to firearms. Not sure how the systems are working for that game, but I guess it’s the closest thing to a first person shooter MMO this show will come up with. Personally I lean more to the classical stuff like we saw in SAO but I can see why the author decided to change up game types to try and keep things interesting.

Certainly this Death Gun guy has the qualities to be a creepy antagonist for the series. Hard to say if he’ll definitely be the only villain, but for the moment he’s the clearest target for Kirito to go after. If somehow this guy has figured a way to kill using the game then he really does need to be stopped. The amount of people who died in SAO was staggering, but this guy going on a killing spree would just add to the death toll. No idea how he’s causing it though I suspect the whole sensory discussion earlier in the episode will come into play. Certainly people being stressed into heart attacks has happened in different mediums so it’s possible. The guy did seem rather disturbed after being shot at, though of course that may have just been the heart attack. 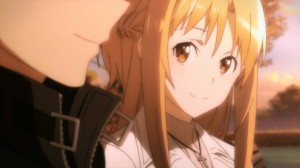 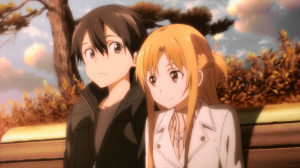 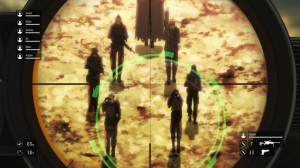 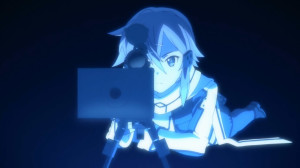 Not surprising they put some focus on Asuna and Kirito’s relationship. Somehow I suspect this is because Asuna is going to be even more sidelined than she was when she was kidnapped in the last arc…Certainly getting a feeling of rotating heroines after seeing the new OP. From Asuna, to Leafa, to this Shinon girl. At least they seem to be doing well on the relationship front. I guess after literally getting married in SAO, regular dating isn’t such a big thing for them. The talk about the future and not really surprised that Asuna seems more than happy to potentially take a housewife role down the road. Also not surprising that Kirito is looking into creating technology that continues to blend technology and reality. In a sense it’s kind of an unsettling topic for some reason. Blurring the lines too far could create an unexpected result.

Not much to say about this new girl who seems to be a major player for this arc. A sniper who should bring some interesting long distance support to the story. A helpful person to have around honestly since we’re talking about someone who can kill someone they shoot at. If this Death Gun can’t hit then it’s not going to have much impact. Her words certainly have some deeper meaning to them. Maybe you can imply she’s also a form SAO player which is possible since there was a ton of people trapped in that game and we could hardly have seen all of them. But could just mean she’s been through some tough times and taking a shot like that really isn’t a big deal for her. Will see how Shinon’s character turns out and if she is as big a player in the story as expected. 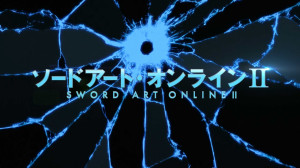 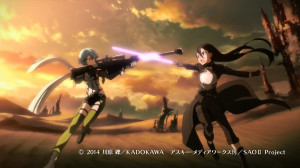 Not a bad new OP for SAO. It certainly does a solid job spelling out who the major players are going to be. I also appreciate using those almost ghost like images for Kirito and who I presume is the real life Shinon. Goes to show that they carry their pasts along with them. The song has good energy and is a good way to start off an action series like this. Looks like even in a gun game Kirito will find a way to melee…with a lightsaber XD. Pretty standard opening for this kind of show. Shows the main characters and it appears Kirito’s harem sitting back as spectators. 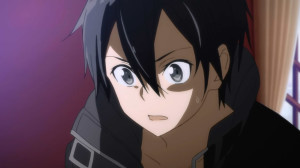 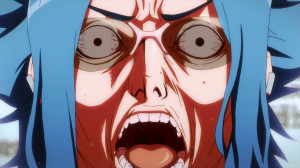 Overall it’s a good return for SAO. They don’t rush things so it’s not a particularly exciting episode, but it’s a good place to start. They did need to set things up and explain why Kirito would get himself involved with this. We have a decent idea about the game itself and I’m sure more specifics will come out next episode. For now we have a villain, a game, a hero, and likely the main girl of the arc. We’re good to go for more SAO.
Score: B+