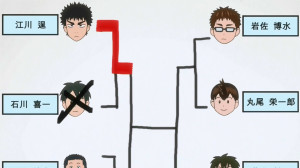 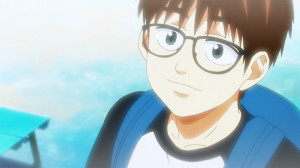 So the match against Iwasa has begun and it’s certainly as difficult as you’d expect since this is the 3rd seed. Maybe even a bit easier since for a good part of the match all Ei-chan had to focus on doing was hanging in there until Iwasa finished his art. Still not going to be easy with his opponent picking up the pace and now forcing Ei-chan into a corner.

Will admit that Iwasa is pretty well the strangest opponent Ei-chan is going to meet here. Really the whole drawing on the court thing is a bit of a stretch. Not that players can’t visualize their shots to help direct them to where they want to go, but a guy actually playing so he can see art on the court seems like it’s a bit far for the kind of show we’re dealing with here. 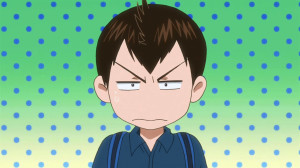 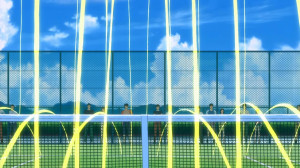 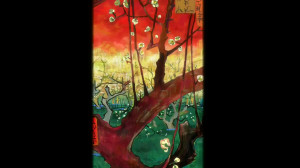 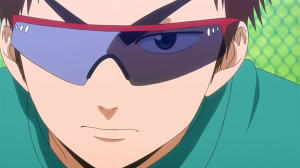 The episode was pretty straight forward in how things went down. Maruo had an early struggle against Iwasa since he couldn’t figure out why the guy was playing the way he was. Some very weird shots that was making it hard to get a rhythm going and get a feel for the match. It just took a while as we had to sit and wait for Ei-chan to figure out the whole trick behind what Iwasa was doing out there. Can’t really blame him for not getting it right away since as he said there could be a number of ways he could be ‘drawing’ on the court.

Once he figured out the trick the advantage did turn. After all if there is one thing that Maruo is good at its being ridiculously stubborn and determined out there. If he just has to return every ball until his opponent just stops playing that’s fine. He was able to do that kind of thing against Oobayashi last year. The problem of course is that while Iwasa doesn’t care that much about the game or opponent he wants to win so he can keep playing opponents and creating his art. If he didn’t win at all then he’d never have gotten to the third seed status. While his style is strange, his ability to hit the ball where he wants is a serious weapon. 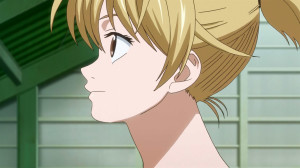 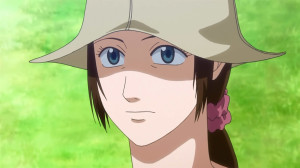 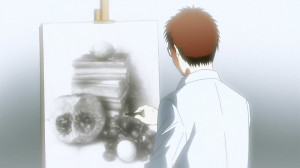 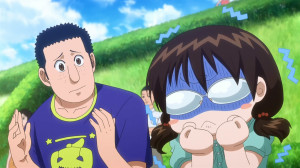 Have to say I agree with his coach that Iwasa really should just be an artist. Sure play tennis as well, but come on let the guy paint. Maybe it’s a culture thing, but I felt his parents were being remarkably selfish. It’s fine for them to live as artists and make a living from that, but it’s not alright for their child to? If their parents were against them being artists that’d be a remarkable example of continuing a cycle. I get they don’t want him to suffer and want him to look at other options, but why does that mean he can’t chase his dreams? They are only hurting him by cutting away the path he wants to walk and thus making it all the more a focus in his mind. People want nothing more than the thing they are told they can’t have.

On a smaller point I’m really glad we got even a brief shot of Natsu playing. Maybe her matches aren’t as interesting since she’s just so darn good, but I think even that small scene was useful. Can forget that Natsu is a player and one chasing her dream. She’s not just a potential love interest cheering the MC on. Saying that sounds really mean to Sasaki who basically came to this match to be a love interest cheering the MC on XD. 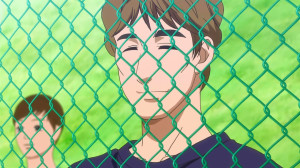 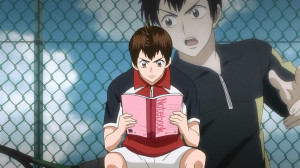 The match is going really well and they are just moving along at a nice pace. I did like the scenes with Iwasa and his coach just to see how his character developed and how he got to this point. Again you can find similarities with Ei-chan in their capturing the movement of the ball on the court (for notes or visualization of art). The rest of the match should be fun to watch as we can see Ei-chan trying to use that power of memory to give him some kind of mental focus.
Score: A-