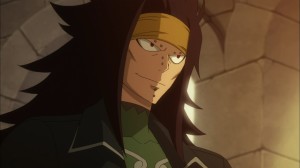 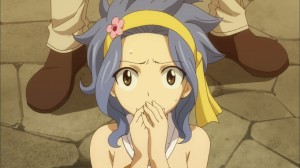 Finally! I think its an understatement to say that I’ve been waiting eagerly for Fairy Tail to finally kick things into high gear. This week, we finally get a solid episode that gets the ball rolling, increases the intrigue in the big mystery and just overall delivers on nearly everything.

Its beyond my understanding why the series HAD to wait till this exact point to reveal what it does, but now that its over with, we’re getting toward more interesting moments.

So the big thing that destroys Fiore and brings about a dark future is that 10,000 Dragons just invade the capital. Well… I guess we’ve got our link to the scene that the series opened up with. Knowing what’s coming is nice, but there’s still a lot of questions. Where do the Dragons come from? Dragons have been mostly dormant for years now, and yet they suddenly decide to attack? There’s obviously some kind of trigger that causes it.

Even more interesting, is that multiple characters seem to be doubting future Lucy. Indeed, for some reason, Future Lucy isn’t telling the whole truth. Jellal had his doubts before, and now Arcadios joins the club. Apparently when Lucy does tell Natsu and the rest about the future, she starts lying about certain things.

We finally learn what the Eclipse 2 is, which is basically using the vast amounts of energy stored inside the Eclipse gate to blast the 10,000 Dragons into oblivion. Future Lucy is apparently the one who gives Hisui the idea to use Eclipse in that way, yet she says that she doesn’t have a solution to prevent the future. She also apparently lies about when she arrived in the past.

Jellal has his own theories, one of which seems to question the very idea of this Future Lucy’s existence. Its unclear, yet its very interesting. The show seems to be hinting at the fact that Future Lucy is lying because of what happens to Natsu in the future, and that large dragon that seems to come at him.

Of course, beyond that, there’s other cool stuff that happens too. For one thing Jura ends up stumbling on Laxus and Orga. That makes for a very interesting battle royal right there. Can Laxus take on Jura? My gutt says he can’t. and that there’s quite a big battle to be had.

The major stuff though, seems to happen where Gajeel and Rogue seem to be having their battle. Gajeel is another character like Gray, that I feel gets the shaft more often than he should. He’s pretty close to Natsu’s power level, yet the poor guy doesn’t seem to get a chance to really shine. Much like Laxus, Gajeel’s appeal is in being the anti-hero that seeking redemption and trying to be a better person.

The link between Rogue and Gajeel also felt pretty solid. Rogue looking up to Gajeel, and then seeing Phantom Lord get destroyed by Fairy Tail, all of that is pretty solid believable stuff. The appeal of Fairy Tail and comrades is pretty nice, and Gajeel raising Rogue back is a touching moment…

And then the first good twist of this arc happens. Rogue gets possessed by some shadow like being, that seems to be related to destiny and the future. I’m not quite sure how he ties into this whole change the future thing, buts its clear that there is some relation between this battle and the larger destiny of the world.

As soon as it seems like Gajeel might be out of his league, Gajeel surprises everyone. Much like Natsu, Gajeel ends up eating the shadow and fusing it with his own Dragon Powers. Maaan! This was one of those moments that has made Fairy Tail so special, where the main characters make a surprise turn around that is both creative and unexpected.

Seeing Gajeel become the Shadow Iron Dragon is an awesome way to end the episode, Gajeel remembering Rogue and his actual name, Raios and calling him his little brother was the icing on the cake. Yes, I’m aware Crunchyroll translated it as former disciple, but outoto doesn’t mean disciple, but little brother XD. It seems that crunchyroll is dropping the ball a bit with their translations, as Hisui also refers to Future Lucy as “that person” instead of explicitly stating her gender this episode (which seems to have been the case in previous episodes as well).

All in all, I’m pretty excited to see where things go from here. Fairy Tail seems to be finally back on track, and hopefully continues the momentum forward til the end of this arc. 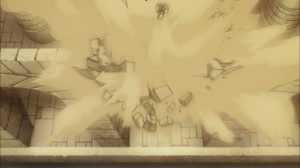 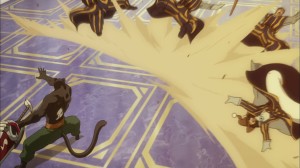 Seems like the Laxus, Orga nad Jura battle is taking center stage next week. See you all next week!