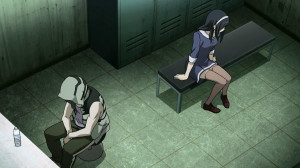 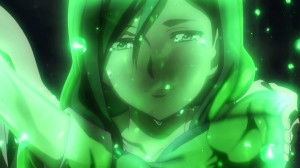 I have to say it’s a bit worrying that I actually am more interested in Bugbear’s story than the rest of the main cast. Maybe a good tragedy reaches people more, but it’s not like the main cast has no tragic backstories. Daichi lost his father, Teppei is like an alien with his ‘father’ missing, Akari has parental issues, and Hana is really alien. Not like there shouldn’t be sympathetic aspects to those people, but honestly Baku/Bugbear really caught attention with this episode. Kind of sad itself that we’re going to leave him be for the time being. I really wonder where his character arc is going to end.

Bugbear really is a guy with nothing to live for. For really the first time since Teppei we’ve seen a guy who’s barely changed after being ‘awakened.’ His regular self was so defined and hit so strongly by the reality that only his memories were awakened without a great change in personality. I think Baku normally would have responded in a painful rage if Kumiko had died like that. Honestly his character could go any number of directions in this show. He might simply seek death by Earth Engine, might return to that town to find a way to live after losing his immortality, or any other number of things. I just hope he finds some semblance of peace, deserves that at least. 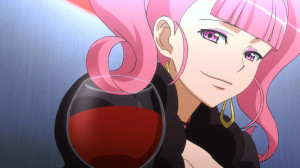 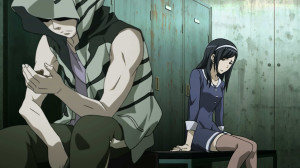 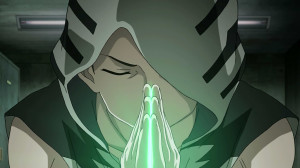 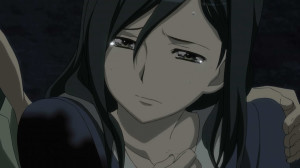 Really this episode was all about the incident hinted at in Kumiko’s nightmares and the immortality we saw. In the end that was all Baku’s singularity. I’m not even sure how to judge that ability really. I guess it basically does just restore things to the state that Baku understood or remembers. The cards can be restored without issue since he knows their original states. The picture of the mother seemed to lack a face which might reflect Baku not knowing what she looked like but if that was the case Kumiko would probably note that. With the people I guess they just became what Baku understood them to be and they lived based on that.

Have to say I didn’t quite expect things to turn out how they did in this episode. I mean yeah the preview was pure spoiler in showing Baku getting into the machine and fighting. But at least they were misleading about how it got to that point. The kiss really didn’t do much other than awaken the memories of Bugbear. It was pretty well Baku the whole way much like Teppei. Except Teppei had a reason to stay with the main cast because he had Daichi and the others.

I did like the surprise that it was all Baku’s ability and thought it was a tragic moment when Kumiko faded away. While she was kind of an illusion I like to believe that she would have acted the same way regardless. I feel like she was definitely a kind person who hated the business that her father was invested in. I feel like she did what she did for the sake of Baku. Of course it was all incredibly selfish. Pretty well committing suicide to kill her father and his business leaving Baku alone. 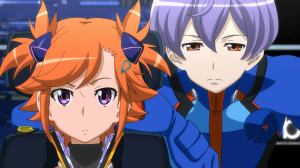 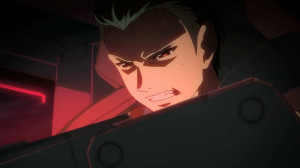 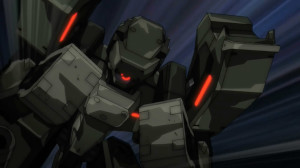 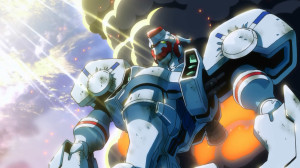 I have to say the main cast is making me face palm a little bit these days. They have a good read that Baku is the guy they are after. So what do they do about it? They go to watch a fight….and then go straight back to base! You guys know the machine is going to activate that night…find that guy and try to get into contact with him. I mean this situation practically was handed right to them and they just never bothered to take action. At the very least Daichi could go back to prepare, but Akari, Hana, and Teppei could have tried to follow Baku and help out. They just sat back and dealt with the aftermath.

The fight itself was fine. Honestly I did feel for Baku in that fight as you could see how empty he was feeling. The only thing that really mattered to him was protecting Kumiko and he realized that he couldn’t. Almost seeking his death or erasing any evidence of her existence. Daichi did a solid job and it’s clear that if Baku had any will to fight honestly he probably would have won. In the end he was practically begging to be defeated and that was enough for Daichi to even the odds and come out on top. 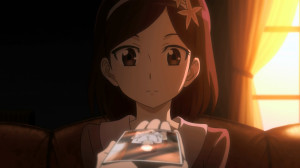 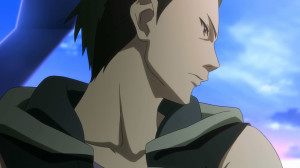 I actually think this was one of the stronger Captain Earth episodes in a while and it was all thanks to the non-main cast. Baku really was a guy you couldn’t help but sympathize with. He had a very tragic story to tell and in the end I’m not sure there is a happy ending to be found for him. You can only hope he’ll find it eventually. Can’t say I’m overly thrilled to be going from this to the next episode. Seems very Hana/fanservice focused. Not a bad thing, but feels like it won’t quite hit like this episode did. Maybe they can develop Hana though since I feel she is easily the most…empty character of the cast.
Score: A+