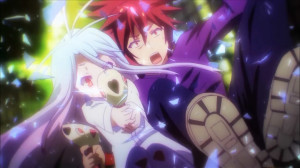 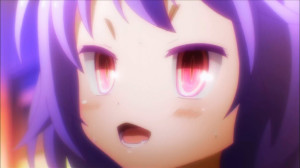 No surprise that No Game No Life finished off on a strong note. The series has been pretty reliable and consistent the whole way through and this episode was another good one. As expected it mostly handled the remainder of the game and had some pretty good aftermath moments as well. Things certainly went bigger than I thought they would and have to give props to Sora for planning so far ahead.

If we get nothing more from the series I can still be pretty satisfied with how we left off. Gave a good feel for where the story would be going and ended on a triumph. The creation of the Elkia Federation is a pretty incredible accomplishment and should strengthen the position for both Building towards a future where all the races are going to be standing united and not just focused on taking down each other or defending their positions. 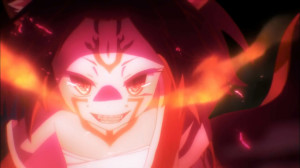 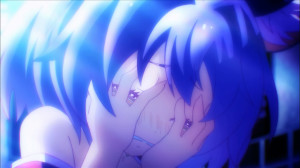 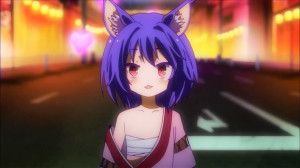 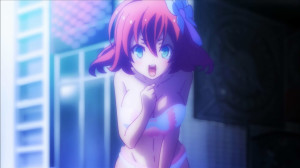 The last part of the match had some intensity to it with Izuna going beyond her limits there. No matter how good Shiro or Sora were that was just not something they could take on in a straight out fight. They needed to lure Izuna into position and cause her to lower her guard. Of course she’d relax once she took down Sora and Shiro. They were the primary threat and on top of that her ability was pretty draining. No one remembered Steph since she wasn’t considered very capable. I had wondered what they were going to use Steph for and appreciate this move. Steph did help save the day even if she did very little of it consciously.

It had to be hard on Izuna initially when her defeat sunk in. She’d been playing all this time with such incredible pressure that games lost their very purpose in being enjoyable. Of course her competitiveness built up over the course of this match and she found that joy. Also found the painful frustration of losing, but at least she ended up being a pretty good sport. It certainly helped that Sora helped explain what his plan was and that no one was actually going to be ruined because she lost. 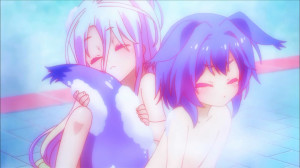 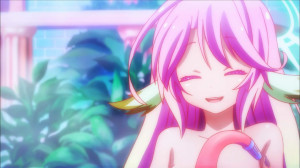 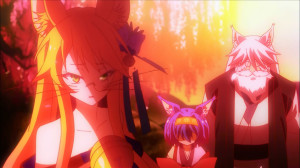 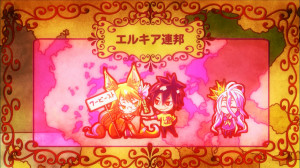 Not at all surprised that once again the series returned to the bath XD. Since this was the last episode it probably was a good idea to take full advantage of it. Plus Shiro and Izuna are a pretty fun pair to see together. Can’t say I’m all that surprised that Shiro was all about the chance to wash that tail of Izuna. Though it came with some hilarity with Ino showing up and the Priestess making her grand appearance. A bit of a shame she got so little screentime overall since I’m curious about her mindset that lead the Eastern Federation to take the actions it did over time.

Not surprised either that there was a serious need to talk after that match. If looked at simply it wasn’t that big a deal. Elkia regained its territory though still couldn’t use a great deal of it. And the Eastern Federation just moved back to where they started. But really the world completely changed with this showdown at least for those countries. Because of all the planning by Sora he pretty much forced the warbeasts to give up entirely after that loss. Their secrets were out and once the powerful countries brought magic into the equation knowing what to do it would be over for them. The only choice really is to unite with Imanity and secure their rights in the process. A good move by Sora to force the tie so both sides get what they want. Since the plan was never to simply crush the Eastern Federation. 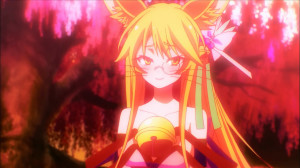 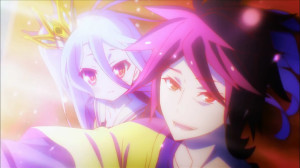 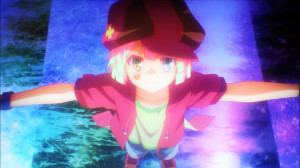 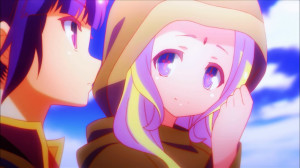 I did like the ending with Kurami and Fi ready to head out and demolish the Elves from the inside XD. It really shows how her character has gone from someone who felt Imanity could only survive while being sheltered by another nation to being willing to fight and struggle to find a way to win. Gaining Sora’s memories of course helped a great deal there in building that belief. However the novels unfolded I sure hope that Kurami managed to be a key part of it all. Seems like it’d be a great turn around for the slave girl to be the key for bringing down the largest of all the nations.

Really shows how no one ever considered what Tet was trying to accomplish. Everyone was focusing on fighting wars like before but just limited by the game rules. But a key rule really was that last one. It’s not about destroying the other races and taking on god, it’s about the races coming together ready to take on Tet. After all we’re talking about a god here, it’s going to take a combined effort most likely to win. I can’t see it being another simple game of chess. Chess may be involved to some degree, but it’ll be something spectacular I’m sure. 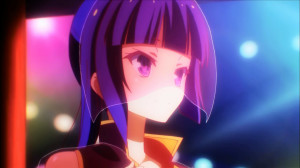 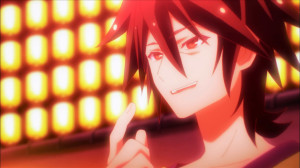 This really was a fun last episode. It does have a sequel hook, but I’m still ok with that. Though maybe in a week when I’m not seeing a new episode I’ll feel more sad about it. This was a good show that entertained week in and week out. It had fun with the games, but didn’t feel like it had to become so complicated that you couldn’t just enjoy. This was a fitting end for the series and another strong one.
Score: A 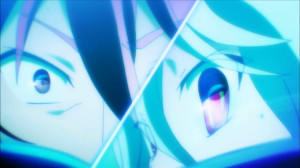 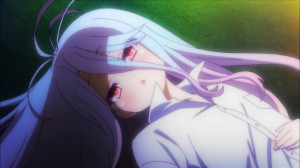 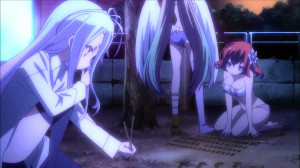 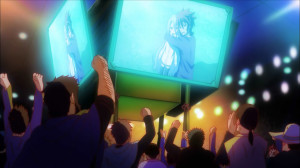 I will say this show surprised me from the start. I wasn’t sure what to expect, but it really impressed with the main characters and the art style. It took a while to get used to the style, but it really worked nicely with the show as a whole. The episodes were colourful and entertaining almost all the time. It always started off strong with one of the better OP/ED combinations of the whole season and I can’t say there are many weeks I felt the need to skip over them in order to just get to the episode itself.

It was a somewhat refreshing feeling to have a pair of siblings be the core for the series. You could feel the strength of their relationship and how central they were for each other. Just one episode was focused on them not being in it together and it was a tough one to watch (because I felt for Shiro especially). While the focus in the games generally went with Sora I feel that’s probably because he is the older sibling and knows more about having to outwork everyone. After all he had to really push himself in order to keep up with Shiro as she is right now. 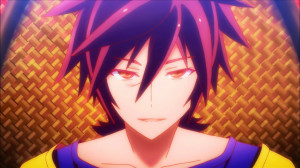 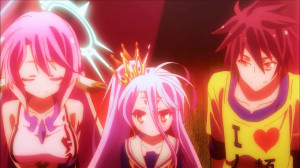 The show had a pretty entertaining cast as a whole. I enjoyed the weak point of Sora and Shiro not being able to be separated. The extreme reaction had good impact and made clear that this is a team that needs each other to thrive. How Sora was instantly pulled in by Shiro’s genius and how Sora helped make games fun for Shiro (like they did for Izuna) was a nice thing to see.

Of course it wasn’t just those two. While Steph was often too much comic relief she was an enjoyable character. Putting in a lot of work and having the social skills with the public to do a lot of good for her country. Jibril was pure hilarity from the start. With her initial superiority and soon following the whims of her new masters with…passion. She did bring a lot of talent and skills to the group. 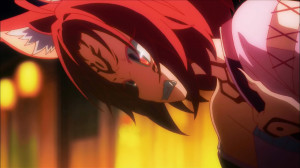 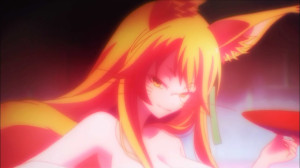 Even the enemies ended up being good sources of assistance. Kurami started out as someone who understandably didn’t have a lot of hope in the potential of Imanity. Few will have that much faith growing up an Elven slave. But thanks to seeing Blank in action on a few occasions and of course gaining Sora’s memories she could understand their potential and strength. Now she’s off to cause some serious trouble for the Elves along with Fi. Fi’s an entertaining girl in some ways, but of course Kurami does tend to steal the show when they are together.

Izuna-tan will be a nice ally to have as well. Of course that almost limit break like ability is big in games where physical skills might be important. Though I guess many races will want to use physical abilities when their real strength is in pure magic. Still a fun girl who finally started to gain understanding of what is so much fun about games. Too bad we’re out of episodes at the moment, but she was pretty enjoyable in her own way. 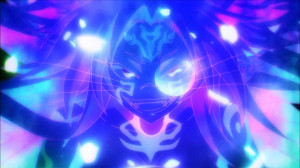 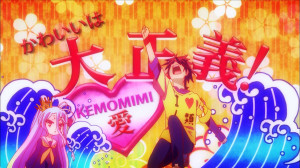 Will go over specifics in the final review, but have to say this show was probably the most fun of any series I saw this season. From the characters actions to the references to the games, it had something to offer almost every week. Only one episode really had me a little down and over the course of 12 episodes that’s not bad. I had a lot of fun and will miss this one. But such is the way of the world. Shows come and they go XD.