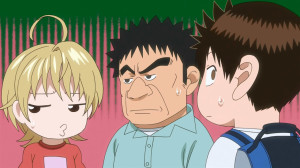 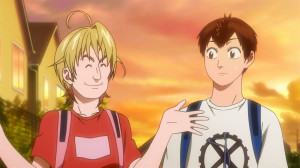 Well I’ll say that Mike in this episode felt a bit weirder than I remembered. Of course that’s probably just because it is rather entertaining seeing the series tackling a North American character. In the end Mike is a pretty odd character, probably because he’s more of a psychological trainer. A strange person, but he did give some solid advice in this episode.

The series has remained solid in handling some realistic sides of sports and the mental aspect remains true. Certainly when you are in a positive mindset you can get more done and me more efficient than if you are thinking about the worst case scenario. A key part of the last match was the mental side and how Ei-chan could have made mistakes because of his mental state. Being able to stay focused and stay in a good mental state no matter how the match is going can help a lot. Also, behold the horror that is Mike’s face on Natsu’s body… 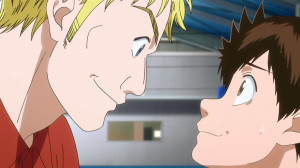 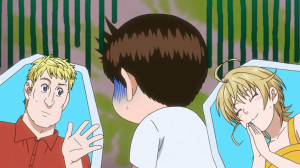 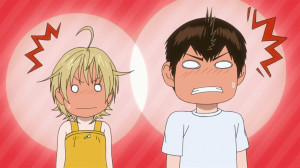 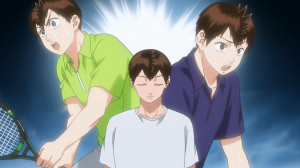 I can see why Natsu isn’t a huge fan of Mike though. He can’t really help her with anything and is a serious bother at best. Not that big a surprise I guess since Natsu seems like the type with a pretty strong mental state. Seems being key since we still haven’t seen her play much tennis yet. Will say on a side note that the pony tail look really does suit Natsu.

A good laugh though with the whole combat mode vs love mode stuff. Certainly that’s a fairly accurate statement. Focusing on winning a key match and focusing on his feelings for the girl he likes are pretty distinct things. I suppose this shows that it’s a good thing to be able to compartmentalize and focus on the task at hand. Also shows that the first impression between him and Natsu was a rough one XD. But clearly things improved over time until they both seem to have some interest in each other. 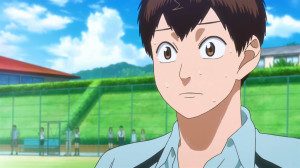 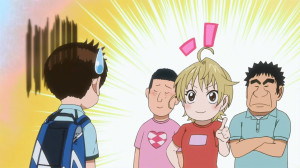 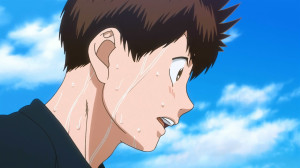 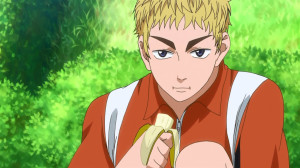 Suppose I can’t blame Ei-chan for being a bit thrown off by his own success. When the winning shot was pretty much a fluke that doesn’t quite sit as well as an overwhelming victory. Of course in the end a win is a win. His play forced his opponent into making mistakes and taking a risky course of action. A match can be won with a single shot, but if he wasn’t playing great to that point he wouldn’t have lasted until that final shot. Sometimes you just have to take success where you can and just move ahead.

Now of course things went a heck of a lot easier against his next opponent. I almost wish we saw more of that match, but I guess the focus really is on the matches that challenge our MC and not the ones that he barely had to work at. There is some fun in seeing Ei-chan obliterate someone, but I suppose it’s not that interesting. Plus they do only have so many episodes. And clearly from part of the episode focusing on the ceiling of the STC…they have a limited budget for animation also XD. 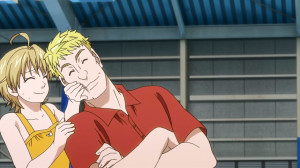 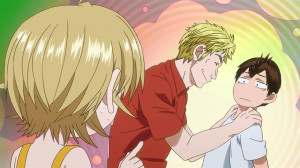 Probably a solid change was the behavior of Mike around Natsu. Honestly in the manga he was a bit creepy in his initial appearance. They kept the too close bit around Ei-chan, but pulled back on how close he was to Natsu. Keeping it to a level of just leaning towards her instead of literally hanging off her. A minor change, but one that made him seem like a bit of strange fellow instead of feeling like another character trying to hit on Natsu. Probably making too much of a deal out of a couple pages of manga, but it did seem weird how attached he was considering he apparently has nothing to teach her. 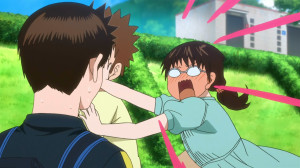 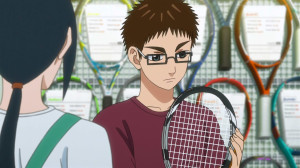 There isn’t much to say about this episode really. There was a lot of aftermath and the lesson about the mental side of the game. A little bit of focus with Sasaki and Kageyama coming to visit, but nothing crucial there. The girl coming to the games does give some focus on a potential love triangle situation, but that’s still not a major thing here. The next match will be interesting since this is quite the unique opponent. A very unusual type of person who obviously will be a challenge being the 3rd seed here. For someone who only just made it past the third round for the first time this could be an unprecedented challenge.
Score: B+