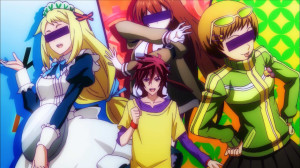 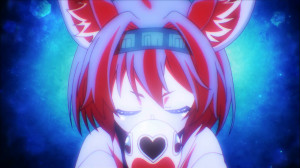 If this series has been anything, it’s been fun. This episode was pretty much no exception to that. Just a full blown game that was enjoyable from start to finish. I expect like with the chess match it will pretty well wrap up next week and we’ll get some aftermath. But for the moment it was a lot of fun and did allow a variety of characters (besides Steph) to have their moments to shine.

Izuna was a tougher opponent than I thought, but I wasn’t overly surprised by that. She had been owning various people (including Jibril) in games over and over. She was an expert at this game if nothing else. And as expected she was getting some cheat assistance in a way that was difficult to prove. Using that telepathy they seem to have in order to give away details about the position of Sora’s team did make things tough. Curious to see how difficult it will be to stop Izuna now that she’s gone full beast. 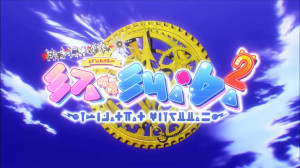 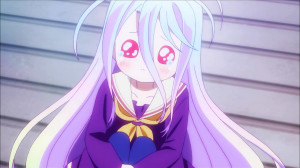 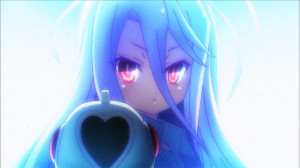 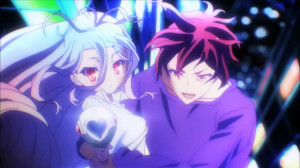 Kind of a cheap move to have the whole shut down scene at the end of the last episode mean pretty much nothing. I mean sure it made some sense, but it was still a bit weak. This game just happened to be based on a city that looks like Tokyo? I have my doubts. Still think there’s got to be someone else from Earth involved with the warbeasts, someone giving them info on games and helping to direct their development.

But will say the Shiro trick was pretty perfect. It makes sense when you look back at the episode. Shiro with her skills should have easily taken out Sora and Jibril the moment she turned. Of course also it was strange how she fired at them instead of fawning over Izuna which we saw her do when shot by Jibril. Luckily Sora understood the meaning from Shiro not chasing after him as fast as she could. It was a good trick and lowered Izuna’s guard long enough to have a chance to win. That one was on Izuna for not shooting Shiro again to confirm she was taken down. 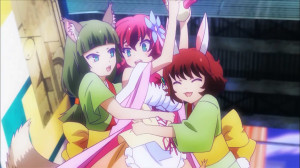 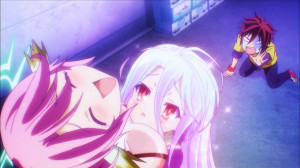 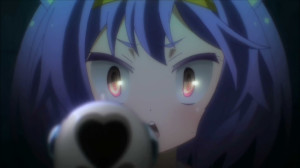 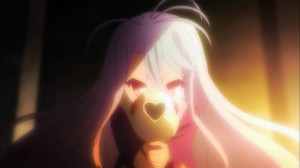 The game itself seemed very….something. I’m sure that shooting clothing and girls genre exists over in Japan, I just haven’t seen any games make its way here with that setup. The basic style of the game made sense. The group was trying to go for a solo heroine end and get Izuna while she needed to capture them all to make it a harem ending. The various swarms wasn’t really a major threat, but could be a distraction in a fire fight. The main difficulty was the basic shooter game it became between Blank and Izuna.

Have to say the shootout with Izuna and Shiro was pretty awesome. I didn’t expect Shiro to be that good at shooters and especially a physical shooting game. I’m glad she got a moment to shine and in the end this game really was won by Shiro’s intelligence. A nice chance for some balance with Blank. Shiro was just awesome, completely shocking Izuna with how good she was. Once they knew that the projectiles bounced she had a real edge in understanding the math of the movement of the shots and how to make life insanely tough for Izuna. She almost won the game right then and there.

It was a pretty fun game though. The reflection of the shots and the ability to use clothing as a last defense actually made it a tough one. A straight shot would get you the win easy, but for someone with the incredible physical skills like Izuna it would be hard to get that clean shot. Everything that Sora’s group did had some tactical sense. Even Sora’s….questionable shooting decisions early on. It did actually tie into the ending when Shiro pulled that great reversal. 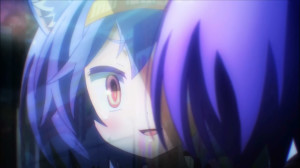 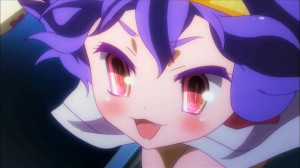 Was nice to see how Izuna changed through the game. You can see how much pressure has been on her the whole time. Always thrown into games where both sides have so much to lose. She can’t afford to lose and thus couldn’t afford to enjoy herself. Unable to understand why Sora and Shiro love games while they have so much on the line. Either way someone is going to be hurt though and she initially couldn’t get it.

By the end she really was getting a crazed thrill from the game. Once the tension was escalated she was completely into it. I can’t wait to see what that dark mode of hers will be able to accomplish. It may somehow be Steph’s moment of truth since she was pretty invisible late in the game. 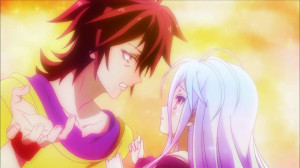 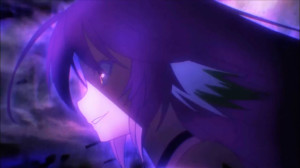 It was a fun episode and another really enjoyable one for the series. Everyone but Steph had a good moment from Jibril being all badass against Izuna to Shiro’s great trick at the end. It had good action, some good Blank faith between the siblings, and some comedy. All in all a very enjoyable episode.
Score: A+