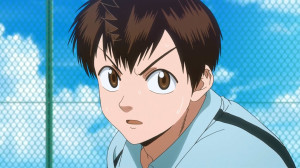 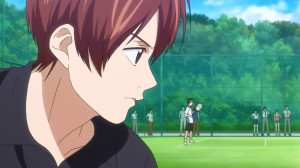 And that wraps up the first legitimately major match of the tournament. I was worried as the episode ticked down that we might end up with another cliffhanger to find out the result. It would have been tough to go another week not being able to comment on the end of the match despite knowing how it was going to turn out. But can now say props to Ei-chan for toppling Miyagawa and finally taking down a seeded opponent XD.

This was definitely a win that was earned through shear effort and perseverance. Miyagawa had the edge in having a winning shot in this match, but Ei-chan forced him to play in an uncomfortable manner and make mistakes. The coach said it correctly, this was the match for everyone to watch if they wanted to know how to take on a superior opponent. The one who has the best skills doesn’t always win. Tactics and mental strength can sometimes just be enough to take it. 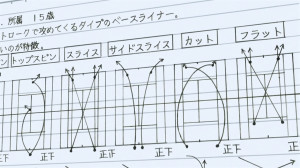 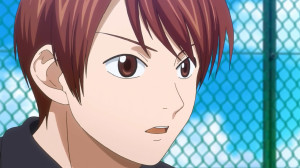 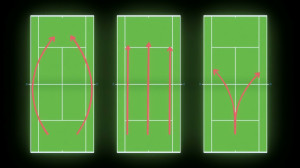 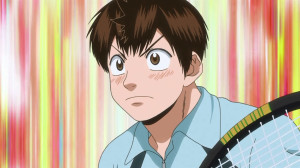 Really it was a pretty entertaining match throughout. It was pretty tough for Ei-chan to break Miyagawa’s serve game the whole way through. The difference in skills didn’t let him play as aggressively as he wanted to. But it all had a purpose in the end . I did enjoy seeing him steal Takuma’s tactic in faking a rush to the net so he could get an easy ball to attack. Feels like the anime made it a bit more clear building up to that moment what the plan was. It certainly worked spectacularly well and was a key in winning. Must have been somewhat fun for Takuma to see someone else have to deal with this guy.

Not that Miyagawa didn’t get his chances in this match to win. He had good advantages and was able to keep his serve most of the time with ease. It wasn’t that he didn’t have experience with dealing with guys who rush the net so there was an advantage there as well. The big issue was a mental game that he was losing. His initial strategy was being destroyed and he wasn’t able to adapt as easily. Seeing Maruo do the unexpected really shook up Miyagawa at times and he just couldn’t keep it together.

The two moments that really defined the match was the Ace for Miyagawa and the final shot. While Miyagawa got a free point with that Ace, it did leave him uneasy. He knew how things could have gone badly if he’d used the wrong serve. In a tight match with serious pressure that broke his focus and he handed that free point right back with the double fault. And of course in the final move he tried to be unexpected himself and rushed the net. But that didn’t work out and the ball bounced right back and was out of his reach. That settled it right then and there. 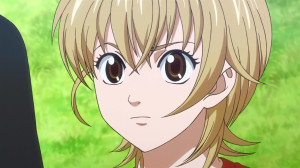 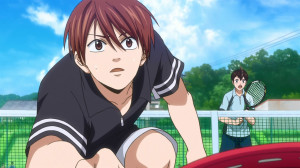 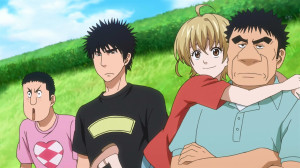 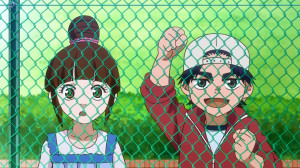 Now this was the time I think for having that girl with Yuki to explain the match. Honestly things like tiebreakers and breaks might not be that intuitive for those who know nothing about tennis. Could probably be a bit much for people who are big tennis fans, but this series is good for the people who don’t know what is going on which I can appreciate. It’s the series that got me somewhat interested in tennis after all XD.

The sidelines were good for a bit of comedy and a break from the action. Obviously the best parts were in the game, but the rest of the cast at least was helpful in giving commentary. Certainly shows the hope Natsu had for Maruo to pull through in the match. Not that she wasn’t ever worried, but clearly was the most invested in the match and the happiest he won. Points to the coach for keeping a straight face during that victory celebration XD. 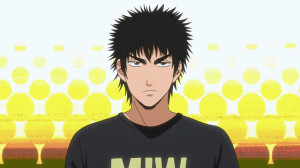 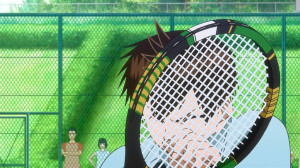 In the end it was a fun match and glad Ei-chan came out on top of this one. Outside of the girl with Yuki being there not much to report. A few extra flashbacks to give the tactics depth, but that’s about it. Now Maruo gets the chance to move forward in the tournament and see how far his tennis can carry him. Really after breaking through Miyagawa the result is up in the air. Has in a sense taken his seed path through the tournament. Once again, I’m looking forward to the coming episodes.
Score: A