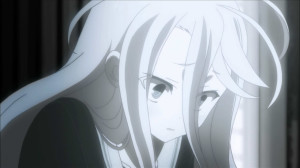 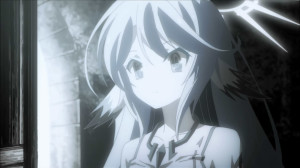 Have to say I’m really happy to see the old ED once again. If there are no more terrifying ED’s in our future I’ll be ok with that. I don’t think the episode was as epic as the last one, just because it’s tough to match the emotional impact. But it was still a strong episode and did have good emotional content to hold onto.

Really it was over before I knew it. It was tough watching Shiro struggle against her doubts and the lack of Sora. The start was rough because we know how these two get when they are alone or feel they are. Shiro was practically in shut down mode. Even tougher when she was the only one who could recall Sora, but even that was fading moment to moment. I was worried there when they were playing the chess game what might happen if Shiro lost. I also think the revival of color once Shiro refused to lose was appropriate. For a show with such vivid colour the lack of it was very striking. 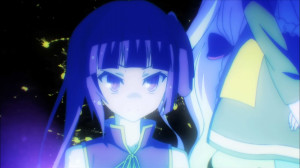 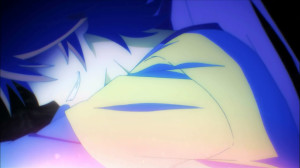 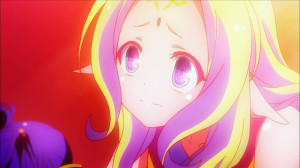 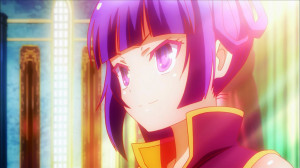 That was one crazy gamble played by Sora. He put it all on the line for the sake of getting Kurami and Fii with them. He probably felt the need to have the magic of an elf on their side and probably just creating leverage. They already made a threat to the Eastern Federation about leaking info to the Elves and now they have one they can point to. It certainly helps as well having Kurami on side. She might have had little faith in what humanity could accomplish without help, but now her doubts will have been cleared.

Does create quite the bond now between Sora and Kurami. Both of them know everything there is to know about the other. It’s a good source of information about that world for Sora and an eye-opening experience for Kurami. She now knows there is a whole world out there that she never even knew about. She and Fii can act as agents who are pretty capable on their own and don’t need to be around the capital at all. 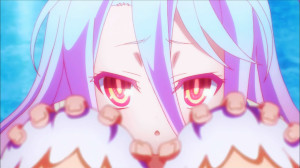 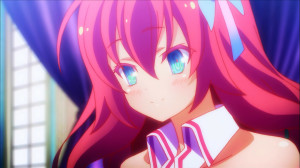 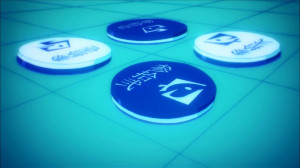 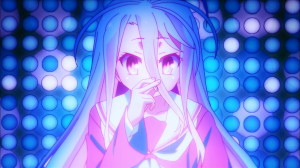 Really that was a tough game to play. I mean every piece representing some aspect of yourself. Just losing any piece would have a negative consequence and you would never really be able to tell which one was which until taken. Thus Sora had to play the game being careful to only give the pieces he was willing to lose, recover any pieces he needed to keep, and set the board up so Shiro could win it when the time came. The guy isn’t lacking skills that’s for sure.

The game really came down to Shiro though and her faith. Sora told her everything he believed she’d need in order to come through. Thus it makes sense that he focused heavily on the key messages. Shiro just needed to remember those words and even with their memories disrupted she could figure it out. He really just bet on that immense potential that she carries. This time it paid off big.

Some points to Steph as well since she did accept the possibility of Sora existing before Jibril. That does make sense of course since Steph is much more instictual than Jibril. While her gut can’t win a lot of games, it can help point her in the right direction. Sometimes being emotional is the right thing. Jibril can be capable in terms of pure intellect, but she can’t make those leaps. Both because of her bias against the lower ranked species (like the elves) and because what appears most logical is what she’ll trust in. Regardless that faith was something Shiro appreciated. 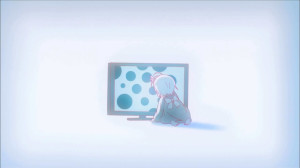 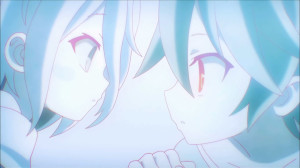 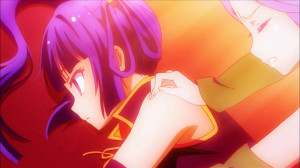 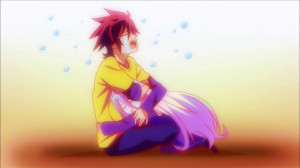 Glad we did get a look at Shiro’s understanding of their first meeting. Certainly a girl who was carrying a great sense of loneliness and boredom at that time. Clearly showing some genius level when she was incredibly young and handed over to some institute. ‘Raised’ in a pretty stifling environment probably focusing on measuring her intelligence and developing it. Not exactly the place you’d go for a good time. The arrival of Sora pretty much changed everything for her as well. Finally gave Shiro someone who could push her and show how games can be fun.

Of course this leaves me wondering about their actual status. Since if Shiro’s mother went to get her in the institute then Shiro and Sora are probably related in some manner. Sora may not have met Shiro until that point since she was taken to the institute at such a young age. Possible they still aren’t related, but possible they are. So will just go back to treating them as close siblings.

Which really is what the end of the episode focuses on. Rather than being upset at the gamble Sora took, Shiro was just sorry she took so long in figuring it out. Both of them were just stressed to the limit by what happened and simply broke down. It was a necessary move in order to topple the Eastern Federation, but that doesn’t mean it was an enjoyable experience. It was nice to see those two together again and now in a stronger position to take on the real opponent of this arc. 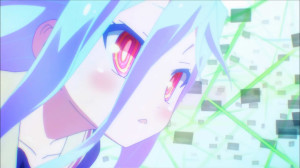 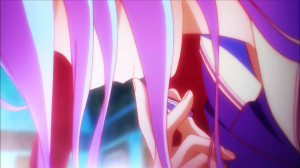 In the end it was still a really good episode. Certainly glad it didn’t end on any disturbing cliffhangers to be honest. It was an episode that let Shiro have the focus which she certainly deserved. The goal may have been finding Sora, but he was pretty well out of it for most of the episode. Shiro got pushed to her limits, but it all worked out in the end. A nice episode with a good feeling to walk away with. Shiro and Sora won’t let themselves lose and that bond remains their greatest strength. Looking forward to the real showdown with the Eastern Federation though.
Score: A