The World is Still Beautiful – 06 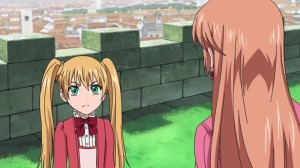 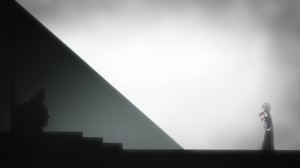 Oh yeah, this show is definitely a shoujo show, and its episodes like this that give its genre definition. With some more serious issues out the way, such as dealing with the state and what not, it was great to see the focus being on Livi and Nike’s relationship issues.

And I’ve said a few times already, I think the thing that makes Livi and Nike such a likable couple is the fact that they’re not perfect but rather pretty inexperienced, yet they’re both determined to work hard and make it work. There’s a general chemistry and mutual feelings of love between the two, but lets not forget that one is barely a teenager and the other is a 15 year old.

There’s no other word besides “cute” to describe the start of the episode. Nike isn’t able to call Livius by his first name, something that I’d say is a bit odd given the setting, but its a very Japanese thing, and also something that’s quite possible in an arranged marriage.

I also have to point the comedic value of Livius, Nike and Super Butler-san Neil. Neil is one of those supporting characters that just gives this show the richness and likability that it seems to be brimming with. He’s a loyal man that is particular about both his king and queen, and isn’t afraid to scold them when it is necessary. He’s more like family than an actual servant or employee.

The one who takes the brunt of the confidence this episode is Nike, as she has to run into Livi’s childhood friend and somewhat of a love rival, Luna. Luna is another Kugumiya Rei character that’s a bit of an aggressive tsundere that has the hots for Livi.

While I’ll admit to disliking Luna quite a bit (I doubt she was created to be likable anyway…) she does bring up a rather interesting side of the Livi and Nike marriage. It definitely shows how different Nike’s country’s customs are from the Sun Kingdom, and how she definitely has to adapt and try to fit in.

Whats great is seeing Livius not give a care about that. Indeed, If Livius wanted a regular old noble lady, he’d have married someone else. He’s quite direct in saying that he likes Nike for who she is. Yet, its equally nice to see that Nike want to prove herself as worthy in the sort of situation she’s put in thanks to Luna.

Luna, for her part, is probably the least likable character to debut in this show yet. She’s not flat out detestable, but she’s definitely not a nice person I’ll say that. The fact that she decides to run away from Livi when he begins to go through the painful experience of losing his mother, definitely gives her no right to come back and challenge Nike at this late point.

In fact, the changes in Livi are proof of the fact that a head strong and unique girl like Nike is what he needs, and what’s best for him.

And once the girls have their little duel, Nike gets a chance to save Luna and win her over too. Its another happy ending, and one where Nike is able to headstrong her way through another challenge, all while being herself.

Again, I’ll say that The World is Still beautiful is the kind of fiction where everyone’s a winner, and everyone ends up living happily ever after. Honestly, I’m glad for shows like this, as its this show that’ll give me the pick me up I need after a rough week. If anything, I’m grading this episode a bit lower than usual because of Luna’s character, which is a bit more cookie cutter and cliche than usual. Still, another nice, and likeable solid episode from THE Shoujo show of the season.