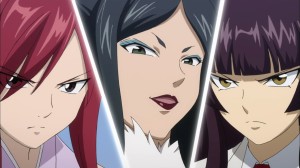 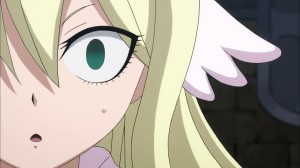 While I do say it with a bit of skepticism and hesitation, I say it none the less, Fairy Tail is back in the groove. This was a week where I definitely felt like the excitement made it back into a series that had been brimming with it before. For one thing, it helped that a fair amount of interesting things happened this episode but I think the best thing about this episode was that it brought back unpredictability to the story and did so in a big way.

I confess, earlier in the series, I had definitely not banked on Gray winning his battle against Rufus (Ironic that this episode actually opened up with Rufus on the ground). Beyond that, however, everything has been pretty standard, predictable and kind of underwhelming. The mystery and suspense was sort of put on hold while Natsu and co took out cookie cutter villain group B in catacombs of the castle.  Not only that, but Mavis’s predictions had been giving Fairy Tail a pretty steady and easy victory so far.

The First’s plan still works as far as Juvia and Cherria meeting up goes, but then things start going a bit south from there… 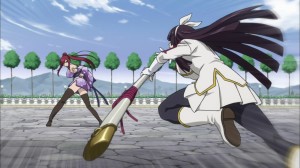 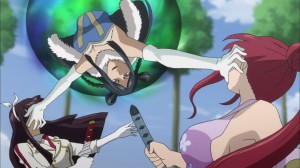 The first of the big upsets was seeing Erza and Kagura play right into Minerva’s hands. Its this three way battle between some of the powerful female mages of the Fairy Tail universe is exciting. It was a treat enough to have Erza and Kagura face off and be more or less equal, but to have Minerva come in and own both of them was well… surprising and exciting.

Added to that, Minerva not only has Millia hostage/trapped, but she can use a form of magic that only Mavis seems to know of. Its definitely some kind of rare Ancient magic, and one that Erza and Kagura barely scrape through.

Of course, after Fairy Tail’s had the last few wins, its hard to really worry about them, and that’s where the other big story came into play. We finally found out the identity of the hooded figure, and color me surprised but it was Lucy. 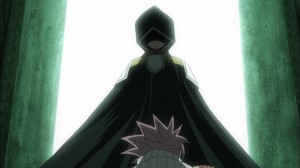 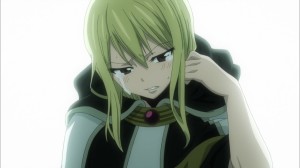 I had guess Levi previously, so good on Fairy Tail for throwing a curve ball there. So it seems that its Lucy that’s come back from the future to try and fix the past and save both Fioire and by some extension the world. Also worth noting is that Future Lucy has already had a conversation with both Jellal and the Princess of Fiore. I wonder what Jellal and co are doing on the sidelines, as I can’t see them just standing by and letting a dark future come to pass.

As for Hisui-hime, she’s still unsure. I guess it makes sense that she’d like to see the results of the Grand Magic Games and confirm for herself if what Future Lucy says is true. The proof itself? It seems that an unexpected Guild ends up winning instead of the one that seems to be the favored winner. Given that nearly everyone seems to be rooting for Fairy Tail, its worth noting that Fairy Tail might not win the Grand Magic Games after all. 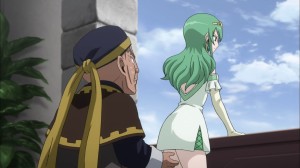 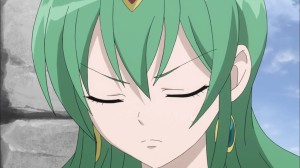 The final part, wherein “the guild” loses due to an unpredictable element, makes me think that it might be something related to Erza and Kagura. We know that Kagura has an extreme hate for Jellal and that she knows that Erza is covering for him, so yeah… I can see why Mavis miscalculated too, since I’m pretty sure no one in Fairy Tail realizes the extent of Kagura’s vendetta or what she knows.

And since I’ve mentioned it before, I suppose I’ll comment on the animation too. Its still pretty rough, while its really quite nice and brilliant in some places, some parts are still pretty static. There’s a real sense of still seeing some pretty static frames and just generally low budget animation work. I hope that when Fairy Tail gets renewed after the first 13 episodes or however long it was initially renewed for, it gets a budget boost.

If things continue to get back on track like they have though, I think Fairy Tail has a pretty good shot at being back to where it used to be. Good stuff this week! 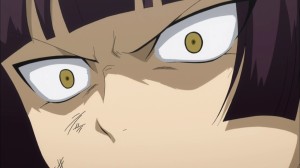 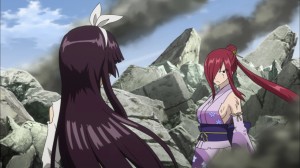 Seems like the Grand Magic Games take center stage next week, with Erza and Kagura’s conflict being the focus. See you next week!