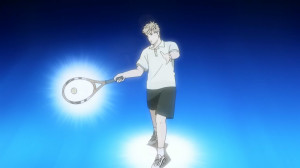 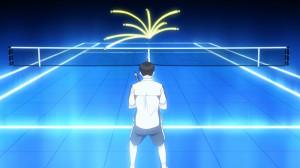 Another good episode for Baby Steps. It definitely feels like we’re starting to get going now that the set-up for the series has been taken care of. Got to see the result of Ei-chan’s first match and of course the offer at the end by the coach to help Maruo reach his potential. They walked a good line where they showed that Ei-chan does have skills that can translate well into tennis, but there’s a lot of work left to be done before he can really be a dangerous player.

You have the feeling that while there was some surprise by how far Ei-chan pushed Oobayashi, this was pretty much what the coach wanted. It gave him the chance to see just how good Ei-chan’s eyes and comprehension are and it also helped fuel a competitive fire in Ei-chan. It’s hard to really push yourself and develop unless you are challenged and feel a desire to win. This match gave him that and now the sky is the limit. 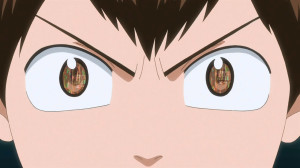 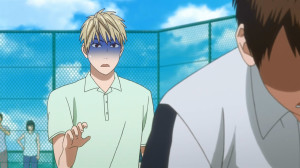 You had to feel a bit for Oobayashi near the end of that match. The result was a given at that point since there was no way Ei-chan could actually fight for the points needed to win. Not to mention the likely unsettling feeling of having every single shot read and dissected like that. No matter what he did Ei-chan was reacting before he actually hit the ball and was staying in it. Of course that’s just how it goes in this kind of thing. If your opponent just stopped caring when the result appeared to be decided it’d be insulting as well.

You can tell Oobayashi can see the potential there as well. He was really struggling by the end to finish the match and that was with Ei-chan lacking in so many areas. Better technique and physical ability could have changed the match in a big way. One of those “damn that was dangerous” moments. 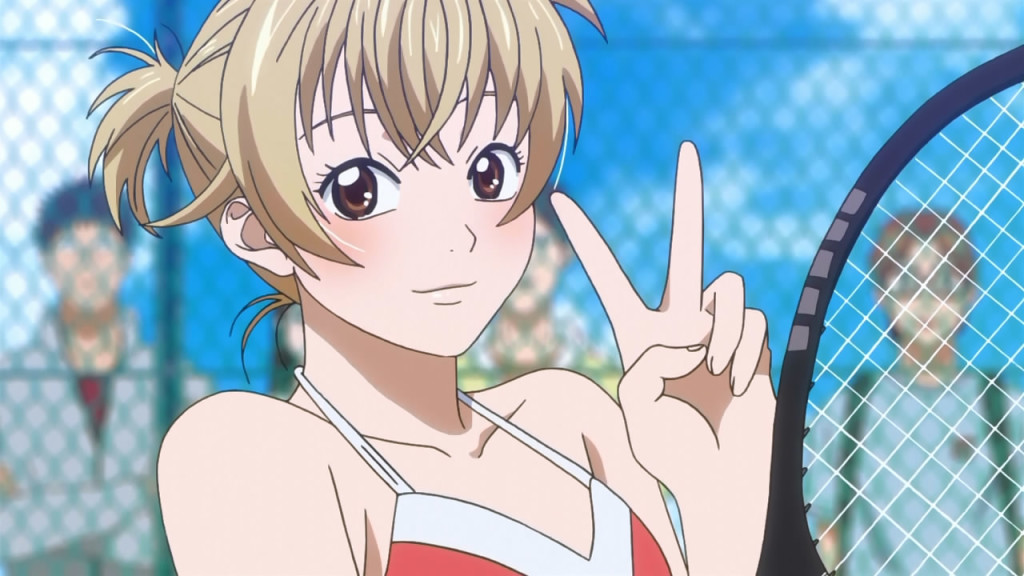 But there was more going on than just that match. While brief we did get to see how Natsu fared. While there was probably nervousness before the match, it really was hard to tell when you saw her dominating out there. It’s one thing to hear that someone is good, but it’s another to see it in action. A very different feel for Natsu when she is in the court in comparison to out of it. The bubbly friendliness goes out and is replaced by a really competitive player. She didn’t hold anything back in annihilating her opponent XD.

You could even tell from the distance how exhausted her opponent was by the end XD. Facing a top seed out of the gate has to be tough. Losing when it wasn’t even close can’t be a great feeling. But it was still good to see how strong she can be.

Also a curious thing after Ei-chan’s match with her saying “thank you.” Maybe seeing how stubborn Ei-chan was in his match was a good motivator for Natsu herself. After all if he can fight on even in a tough match then she definitely should. 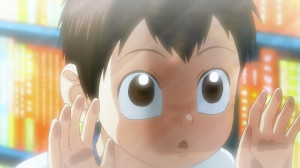 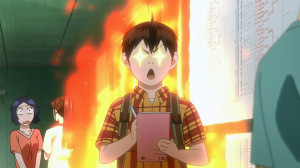 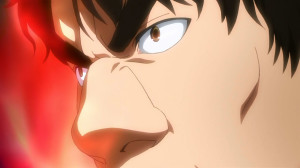 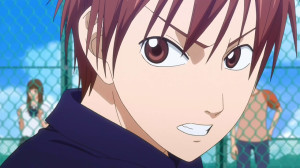 You can already see that Ei-chan is getting bitten by the tennis bug XD. Pretty much giving up on dinner so he could run out and practice hitting against the wall a bit. Losing like that can go one of two ways normally. You can get down about it or you can get fired up. The desire to try more things and improve is definitely there. The combination of his eyes, comprehension and diligence is a strong one. At the very least it can help fuel his desire to keep on trying.

The rest of the episode was good to help get to know the top players in this little tournament. Definitely feels like a preview in a lot of ways since most of the seeded players in this tournament are around Ei-chan’s age. Takuma may be pretty well above them, but most of these guys will still be in the same tournament’s going forward for some time.

It was a good episode to see the different styles and strategies that are in tennis. With Ei-chan we’re able to pick up on the basics but these guys have more fully developed their styles. Like with any sport or game it’s about the strategy and these guys have a good idea how they want to play. Be it the baseliners like Miyagawa and Araya, serve and volley from Oobayashi, and well Takuma. They didn’t focus much on his style here, but can see he has a ton of talent and strong serves. 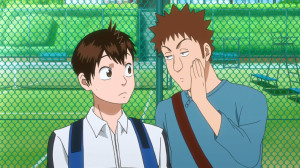 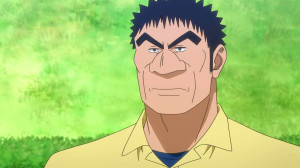 A little change I didn’t expect was the conversation after Ei-chan’s match. For some reason decided to change what Kageyama said. Of course in the manga it wasn’t outright stated what Kageyama was saying, but you could infer he was tricking Ei-chan with the meaning of “pushing.” All you could tell was that it was something Ei-chan said a girl shouldn’t be saying while he was bright red XD.

That was all I really noticed this time around. 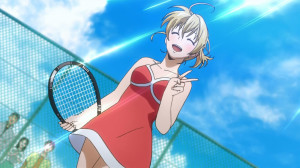 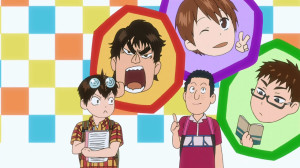 Another good episode overall. Maybe not a surprise that Ei-chan isn’t starting his career out with a win, but he made some good progress even within that match. Now he’s got more of a desire to win and the coach seems ready to give him some more help.
Score: A-