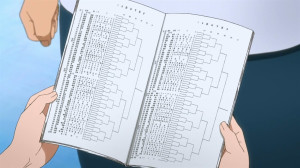 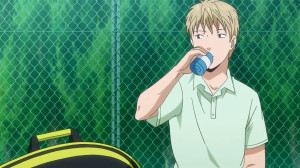 Nothing like the first real competition to make clear how far a person has to go, but also how far they’ve come. It’s only been four months since Ei-chan started playing tennis and already has come this far. There is a mountain of things he needs to improve on, but he’s finding things he can do and is fighting to hang on for every point possible. It’s just the startling line for him, but he’s making a good first impression against the 5th seed in the competition.

Will admit this week I don’t even need to add a changes section, because there really wasn’t any changes of note. A very loyal adaptation for this episode that just completely focused in on Ei-chan’s first real match. 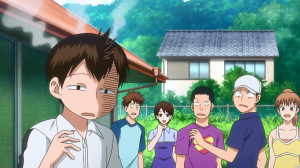 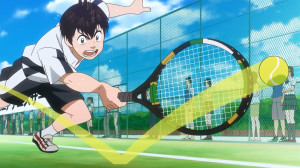 Certainly you can relate to the guy with the nervousness that comes with that first match. To be nervous is normal in that kind of situation, but it easily intensified when suddenly the match was starting a whole lot sooner than he expected it to. It’s just the bureaucracy I suppose, but still do feel for the guy who had to suddenly dive into something he wasn’t completely ready for.

A good thing really that Ei-chan is doing this with a group supporting him. I suppose you could say without the STC he wouldn’t be here at all, but it’s still a good group to have behind him. You could kind of feel the celebrity status that tennis club has. It does have both top seeds for this competition after all. Seems like Takuma is there mostly to get back on his game while I’d suspect Natsu just wants to play in every competition possible XD.

His opponent didn’t seem like a bad guy really. Fairly normal I suppose for a seeded player. Almost felt for him early on since he must have been extremely confused about this rookie who was giving him a hard time in the first game. At the same time he adapted pretty quickly and took a commanding lead. Even though it appears he’s going to have a tough time, the series does seem to be trying to be fair in showing his skill without going overboard. 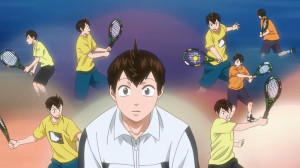 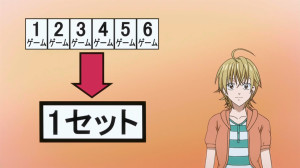 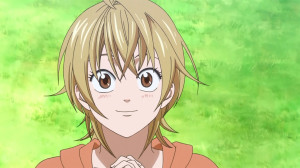 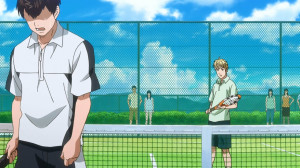 Had to be a eyebrow raising moment for everyone to see how that first game. I mean pretty quick returns putting Ei-chan into a surprising lead. Getting a single break might not mean everything, but it was a huge gain and really had to shake up Ryo who didn’t expect Ei-chan to pull off something like that. Of course the series again was fair to reality and didn’t have that just blissfully continue. Tennis has a lot of parts to it. Ei-chan has worked hard on his returns and his stroke, but there are aspects of his game that are incomplete. His serve for example is pretty pitiful and is more a liability for him than anything else.

And of course thanks to Natsu for being a helpful source of information. I certainly didn’t know anything about tennis going into Baby Steps and this series is pretty respectful of what people don’t know and tends to give solid explanations. The point system in tennis is a bit strange, but it at least is understandable.

The fact that Ei-chan could have a strong start makes sense. His vision was hinted at earlier and explained pretty well here. The ability to pick up moving objects well just gives him a natural edge in tennis and he’s relying heavily on that here. Seems to be relying heavily on that at the end of the episode as well. Though how far that can take him is hard to say. 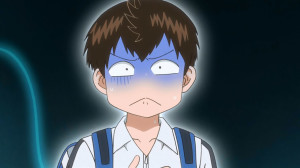 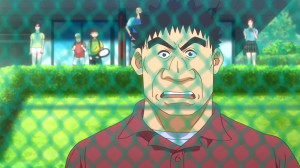 This was a good episode to get a feel for the series and see the first real match for Ei-chan. A very different thing to face someone who’s really trying to win than someone just practicing for the sake of practice. Just a big learning experience for him and everyone following along. The tennis itself looked ok, though it was slowed down a bit for the sake of exposition. Baby Steps remains enjoyable and I’m just going to keep enjoying discussing it.
Score: A-