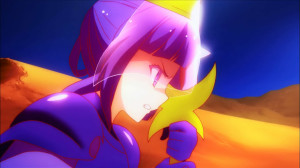 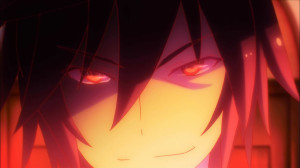 This was an excellent follow-up to last week’s episode. The battle reached its conclusion in pretty hilarious fashion leading up to Blank finally taking the throne. Really the episode just varied between awesome scenes, hilarious scenes, and just pure fun. There wasn’t a point in the episode that I was bored or wasn’t being entertained in some manner. NGNL really picked up steam after the first couple episodes and I’m looking forward to the rest of the series.

The “chess” battle really reached a great conclusion. I was thinking that it’d just be something like converting the rest of the pieces using the Queen, but it did go a step beyond that. In the end this was a strategy game that was supposed to represent a conflict for the throne. Two Kings going head to head using various methods to motivate and control the war. Sora and Shiro just had the advantage of understanding what it takes to win that kind of conflict better than Kurami who was relying on magic to give her the boost necessary to come out on top. She relied too much on one method and lost focus. 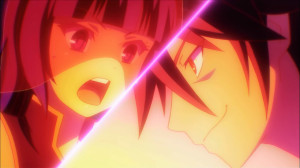 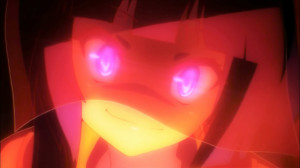 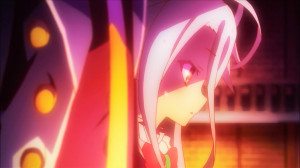 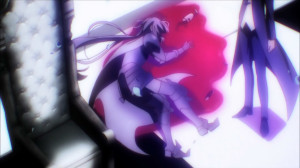 It was a good strategy from Sora creating a revolt from within the black pieces. Instead of using the Queen which could have been turned he acted as the purely kind force that encouraged the Queen to make her decision to fight against the crazy King on the other side. On top of that he just kept on ramping up the pressure and pushed Kurami further into a corner. While people can be dangerous in that state they can also make stupid decisions. Instead of trying something like getting the red army to rejoin through some kind of speech she tried to suicide her pieces in order to win the game.

In the end the result was a given. A King who abuses mind control powers and is willing to sacrifice his people in order to win…won’t last long before someone takes them out. Now to be fair there have been dictators that have lasted for a long time just fine, but there are examples of that going bad as well. At the very least someone who will kill their own people in a mad rage is more likely to trigger an assassination. In the end it was an entertaining war game that allowed Sora to abuse his knowledge about the modern world against someone who’s grown up in this game focused society. 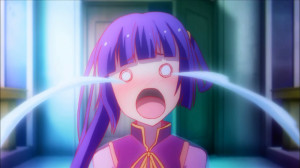 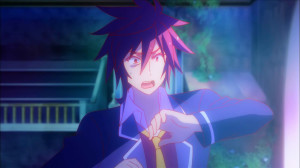 The aftermath was pretty enjoyable in its own way. Have to say I was as shocked as Sora when Kurami broke down in tears there. Of course in some ways I can’t blame her. The guy can be pretty damn intimidating when he wants to be. I’m sure he figured that Kurami could take it since she’d seemed pretty solid for the most part, but I guess everyone has their breaking point XD.

In a lot of ways I do feel some sympathy for Kurami. She was as trapped in the negativity of the idea that Imanity couldn’t stand up to magic and the other races. So she did the only thing she could think of in order to prevent them from being wiped out by a race with darker intentions. It’d be a sad thing to pretty much tuck humanity away in a safe corner, but it was an option and probably the best one without Blank showing up to make a stand. 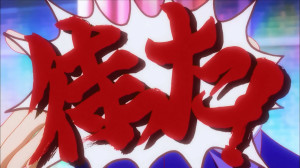 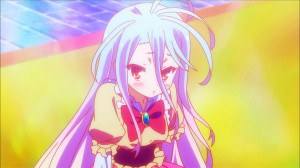 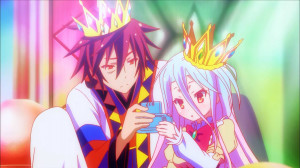 The whole showdown between Shiro and Sora was fun and almost wish we got to see some of those hundreds of games XD. But really you can imagine they’ve just been playing games for who knows how long trying to settle things. Goes to show that they are pretty even parts of Blank when it comes down to it. Sora nor Shiro can actually top the other for more than a game at a time. Neither of them likes losing and will find a way to step it up to win the next one.

They had a lot of fun with the references in this one. With Shiro and Sora objecting to each others statements. When they thought only one could stand on the throne it was a pretty fun struggle. Shiro I can understand being worried that Sora getting too many people around him might lead him to not need her. Normally that’d just be a bro-con scene, but I think there is some legitimate reasoning behind it. We’ve seen how these two get when apart and I think some part of Shiro might be worried that a lot of girls around Sora might make up for her and make her unnecessary. Though I fully believe she just wants to hog her brother as well XD. 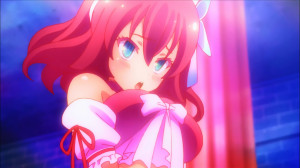 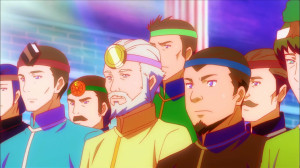 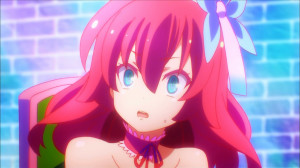 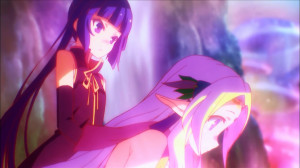 In the end they just read the rules which did make it pretty clear that multiple people can stand as representatives for their race. Just a case where the minister didn’t even understand the rules that well. In the end though they finally ended up on the throne and were pretty effective at getting the country up to speed. I guess playing enough Civilization and preparing for quiz shows will do that for you XD.

I have to say Shiro has one heck of a mean streak with how she dressed up Steph in this episode. Maybe it was payback for the fact that Steph’s outfits remind Shiro that she’s a bit flat in comparison to Steph even when she was the same age. Of course it was pure fanservice, but that kind of thing isn’t terrible long as it doesn’t dominate the episode and it didn’t. 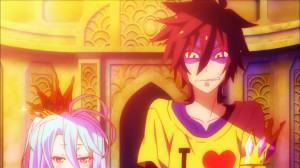 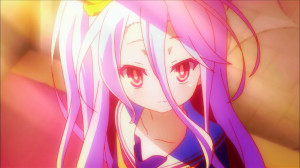 Everything just building up to a pretty awesome speech for Sora. Was nice that they started it by showing again that he was nervous. It’s fine for characters to be pretty awesome, but a moment of weakness here and there keeps them grounded.

There aren’t many big speeches in anime, but this was a good one. I think you can argue that in a lot of ways he did make some good points. There are always people who are going to have skills you don’t and outclass you in some ways. But generally those who want to do something and have some skill can find a way to make up the difference. You have your teams that use good tactics and teamwork to overcome a team of skilled individuals. Of course the skilled ones can still win, they have the skill, but it’s not impossible. 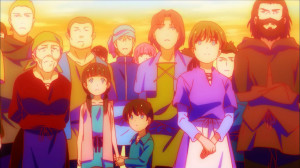 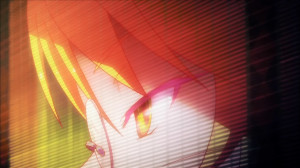 The big thing for Imanity would be realizing why they are struggling and not giving up on themselves. It makes sense that the other races used to just rely on what worked for them and perhaps didn’t invest into areas they didn’t feel was necessary. Everything changed once Tet took over as God. Suddenly everyone seemed to have thought “hey, that tactics thing seems like a good idea.” It changes the equation when everyone is trying to be as clever as they can and combining that with their natural strengths. Imanity lost faith in themselves and started to slip to the point we can see.

Of course the funny thing is that Shiro and Sora are pretty hax in their own way. They are the best you can reach in terms of cleverness and non-magical abilities. Obviously not physical powerhouses, but that’s what they have Steph for XD. Sure it is probably going to take all they have to match up against the best the world has to offer, but they are proving you can compete. Sure it’s a positive message to the underdogs of the world in general, but it’s a good message and one with some validity. The underdog isn’t always going to win, but it is possible to find a way to match up long as you don’t throw in the towel before you start. 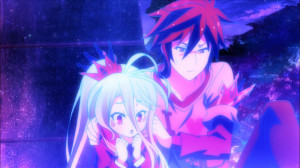 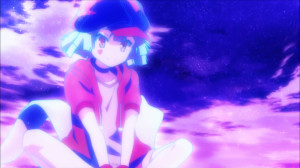 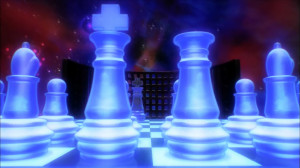 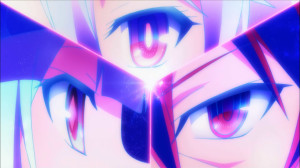 Even that speech had some tactical value though. A good way to lock things up and prepare for the games ahead. I did like the little chat they had with Tet. That guy really loves scaring the crap out of the main characters. At least it wasn’t a major skydive this time XD. Certainly Sora figured out the goal of Tet prett quickly. Nothing the god of games would like better than to put it all on the line in a major game. Give all the races chess pieces and see if anyone can come out on top and challenge him.

The reason he brought Sora and Shiro there was fun as well. You think he probably was bored and went around challenging all sorts of people in various worlds. Just that this time he met someone able to defeat him. Not surprising that Tet is as unwilling to let a loss sit as Sora and Shiro. Together they never lose, but against each other they often do. Always that desire not to let hte other party keep the lead. 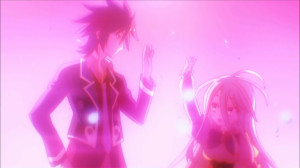 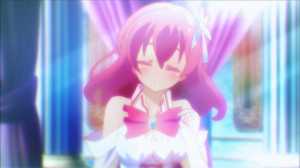 Another good episode for NGNL. The last bastion of humanity has a couple of unique new rulers, but ones that will probably lead them to glory. I can’t wait to see how they approach the different races and how things move forward from here.
Score: A