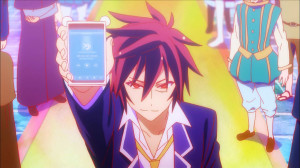 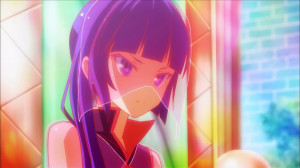 It’s awesome episodes like this that make me glad to be blogging about anime. Honestly this was just a purely fun episode and easily the best of the three this show has had. It had solid tactics being employed, but it was also really entertaining at its core. It’s not just a show that’s blindly sticking to general rules. This could have been turned into just a big game of magical chess, but they refused to stick within that game. We pulled out strategy games and even romance simulation games XD. This episode had it all.

The buildup to the big match was pretty good. There was real intelligence and tactics employed by Sora to help improve their odds. It was a good plan to make it appear like he and Shiro were being supported by another race so that they could limit the options of their opponent. Since magic is something they don’t really understand it’s best to limit the application. 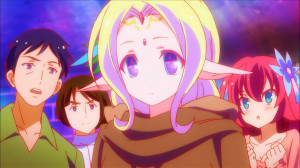 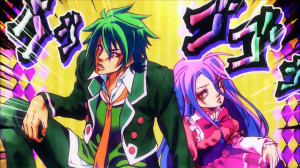 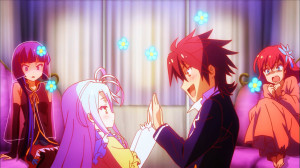 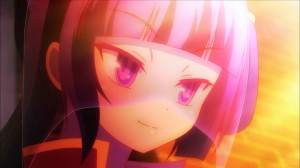 The most hilarious scene might have been on the carriage ride over there. It seems like they really love Jojo in this series since they pulled that kind of style for Blank’s refusal of the offer to withdraw. I’m not sure I’ll ever see something that quite matches up to Sora and Shiro going all GAR like that. Though it was equally fun seeing how giddy the characters were that they pulled off a line like that so well XD.

It’s not surprising that another country is trying to take over using this method. Humanity is pretty much on the ropes here and it’s more surprising that all the countries didn’t try something like this. But I do like how Sora is pretty much refusing all the arguments because Kurami and even Steph are underestimating humanity. It’s not surprising that humanity has given up on its own potential because of how long they’ve been losing, but Sora clearly means to show them what people have the potential to accomplish. He and Shiro might not be normal, but they are still human. 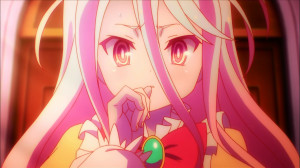 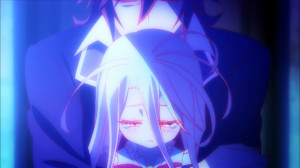 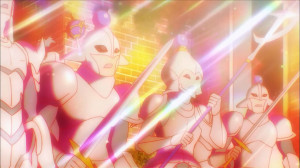 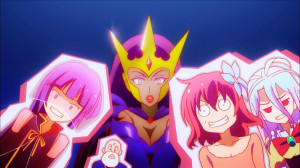 But the prelude aside, once the game got started this episode was completely awesome right to the end. The best thing was that both siblings had their moments to shine and their moments when they needed support. It would be too easy to have them just curbstomp Kurami or maybe just have Sora turn the tables after taking over for Shiro and easily win. But both had moments of failure and moments they needed the other to calm them down. Which honestly makes sense. Both of them are people who had shut themselves off from the world for various reasons, not that easy to adapt even if it’s all about games which they are strong at.

I did feel bad for Shiro when she started to struggle. She’s a very logical person who can dominate a game of chess for that reason. But it becomes a heck of a lot harder when she can’t do the things you normally allow in chess like sacrificing pieces or taking on superior pieces. She did great even wehn her opponent could make moves that you normally can’t. But a match where you have to keep morale up and fire up your forces is something that isn’t in her territory.

So it made sense for Sora to take over part way because he’s much better in that field. Getting the army fired up and knowing how to motivate is something he can handle. You don’t need to think as logically in that case. At the same time it’s not like Sora had a smooth path forward. He had a lot of doubts when things started to go wrong. It didn’t show on the surface, but he needed Shiro before the end. Together they are Blank, and when in doubt they’ll keep each other stable. 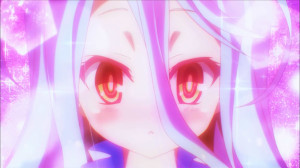 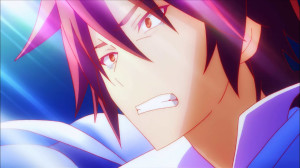 The game really got fun when Sora was getting into it though. I love how he motivated the army like that. Once he saw that this really wasn’t chess then the strategy could change. All about motivating your army more than the other side so you can win hte battles. He just knew the best way to motivate that army to fight. It wasn’t through magical control but the power…of cute XD.

Sora really has some top notch speeches ready to pull out. Used some pretty good logic there. What chess army wouldn’t fight to the death for the sake of Shiro’s cuteness XD? Just fun to see him spin her calculated chess before as Shiro really holding back her pure heart for the sake of their victory. 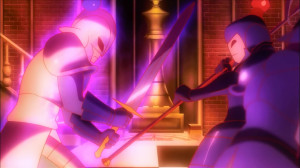 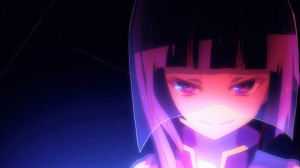 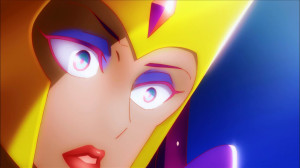 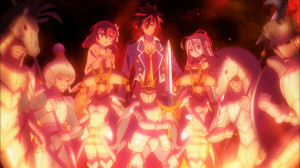 Of course Kurami had a lot of cards up her sleeve as well. Using magic behind the scenes to force the level of morale in her army so they could match up. On top of that having magic in place so that contact with her pieces would result in brainwashing. That completely turns the game on its head since then you can’t actually afford to touch the enemy.

That magic did almost destroy Sora. No matter how confident he is the guy has shown his weak points here and there. It was a desperate play when he jumped down there to try and romance the Queen into not attacking XD. Of course that move did help turn the tables. But it was a gamble and even after that Sora was very much uneasy.

There is a good amount of game left, but it seems like they finally have it under control. If Shiro handles the movements of the army to avoid contact then Sora can continue working on turning the enemy pieces to their allies. There certainly is more than one way to win. Rather than defeating the enemy forces just make them all your forces. 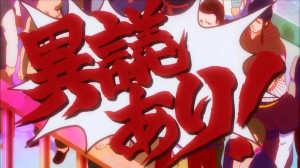 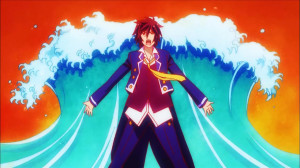 As a whole this was just a fun episode. They took the game from simple chess and stretched the concept out. Both sides using tricks and tactics to change the game and get an advantage. Seems like this will be a fun series with the future kinds of match-ups and how Sora and Shiro will be pressed to overcome the magic that their opponents can make use of. Curious as well to see what other references we’ll get. Already had Ace Attorney with the whole “objection” and the Jojo parts, a series that knows how to have fun.
Score: A+