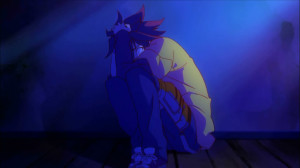 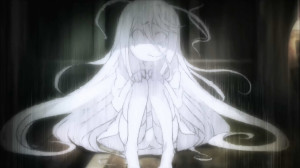 While only 2 episodes in I have to say that Sora and Shiro are two of the more interesting anime siblings I’ve seen in a while. In a time where we’re pretty much getting overwhelmed with a lot of incest, it is nice to go a different route with the sibling relationship. There’s no doubt after this episode that Shiro and Sora need each other in order to just function. Despite how amazing their skills are they are actually incredibly fragile.

Nothing shocked me quite so much in this episode as when Sora was thrown from his room. Just seemed like a bit of harmless comedy and not unreasonable considering what Steph was going through. Instead we basically saw both Sora and Shiro breaking down. A bit of distance and a closed door just destroyed them both. At that point I wasn’t a fan of what Sora had done with the whole Steph situation, but suddenly the tone shifted in an extreme manner. 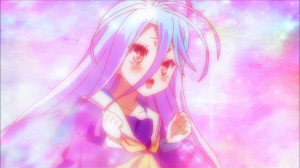 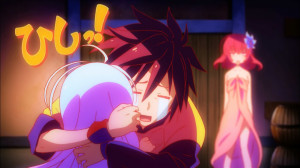 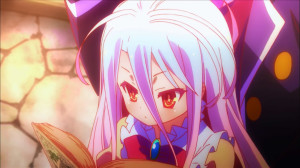 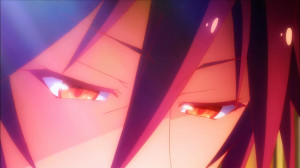 I think it was that scene though that really locked in this series for me. Sora and Shiro most definitely needed the move to this world. Easy to forget just why they were pretty much living in that room. Both of them probably went through some really difficult times and in teh end had to pull away from the outside world. They could accomplish more in that room and through those games than they could outside, but they also clearly became incredibly reliant on each other.

It’s that kind of bond I can get behind. This is a very balanced pair who can cover for each other and when they stand together they are nearly invincible. From the flashback near the end of the episode it’s clear they decided to stick by each other and that doesn’t seem ready to change even turning up an unusual world. 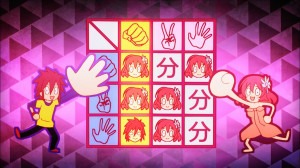 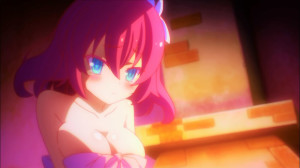 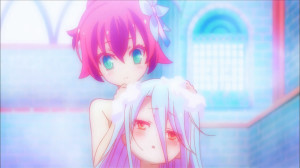 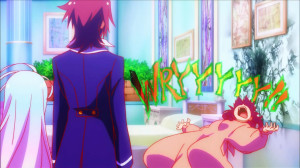 There was definitely more laughs in this episode and a good deal of it came from Steph. Been a while since I saw someone overreact to that extent. The people in this world have some serious power considering she was consistently busting up walls and floors. Almost too bad the races have been forbidden from straight on violence since Steph would probably fit in pretty well in that kind of world, jokes aside she’s probably too kind for that kind of place too. And also props to this series for getting in a “wryyyy” in before Jojo’s Dio could this season XD.

I did feel sorry for Step earlier on in the episode. I did think there was nice mindgames at play with Sora beating her at rock/paper/scissors, but she did a pretty good job trying to find the optimal route. It’s just that she didn’t take her thinking far enough. The big issue though came when Sora forced that love condition on her. While there was some comedy in there I did feel a bit bad for her getting pretty much thrown around by the effect of the pledge. Luckily it didn’t really last that long. Didn’t seem like she was being controlled by the pledge after spotting Sora and Shiro on the balcony. Not sure if it tied into the condition of just having to fall in love and once that was done she was in the clear or just because there are some legitimate feeling the pledge doesn’t have to activate. In a sense it’s the same thing, but with one Steph could not care about Sora and be fine while with the other it might kick up again if she changes her opinion. 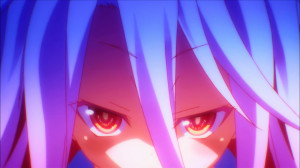 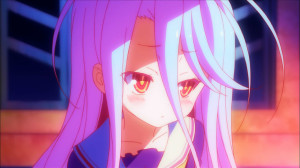 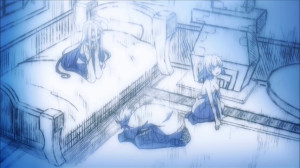 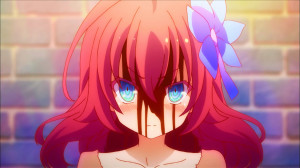 Regardless the biggest laugh of the episode easily came from the immediate effects of Sora’s proclaimed wish. Shiro found the problem with his wish from the start and called him out on it with some decent hostility XD. I’m sure for Shiro having someone else push into their circle is uneasy. And really it makes sense since for both these siblings the other’s presence is necessary for their stability. They really care about each other.

I couldn’t help laughing when both Shiro and Steph were just shut down by Sora’s reason why he made that ‘error’ and asked for Step to fall for him XD. And really it’s pretty believable. For a guy who’s been cut off from the outside the chance to abuse the system to get a girlfriend…wasn’t something he could give up. Shiro is a strong emotional support, but obviously for Sora she can’t be a romantic interest so yeah he kind of couldn’t help going for that. 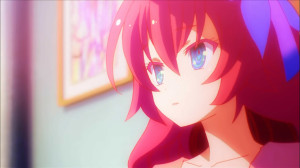 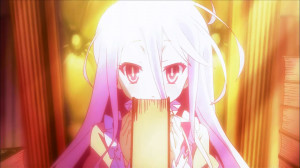 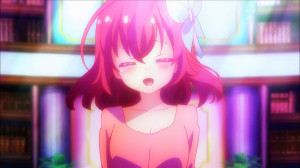 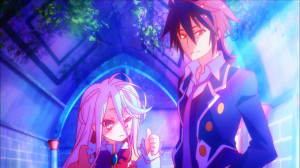 Impressively Shiro seemed to bounce back and be pretty well ok with it after that outburst. I think through the episode she got used to Steph’s presence as well. I think for Shiro as well the option of having an actual friend is something that does have strong meaning. While these two can get by with just each other, having someone else on top of that isn’t a bad thing.

I think both Sora and Shiro really came to like Steph as the episode went along. Sure she’s pure comedy, but also someone that they can be envious of. Both of them just hated the world they came from. Yet here is someone that despite not being the best at games which is what that world is all about, still loves her country and her world. Why not go and save a Kingdom in that case? Sure it gives them a stable base of operations, will involve a challenging game, but I do think helping Steph out is also a strong motivator. 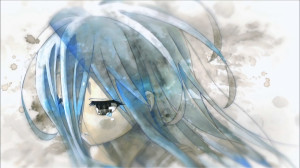 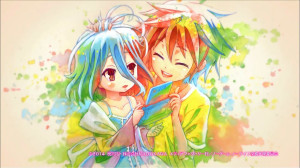 I think this was a strong ED for the series. It’s a pretty soft song, but it really seems to tell the story for Sora and Shiro. Really it’s just a touching ED that probably tells a better story than the average ED might. While there isn’t anything you couldn’t piece together from the flashbacks this did fit nicely. Could see how alone both Sora and Shiro felt until they made a promise to stay together and ended up finding their smiles again in games.

Maybe all the more compelling because it is sung by Shiro’s VA. It sounds really nice as the song builds up and yeah this might be my favorite ED of the season. 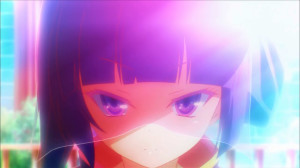 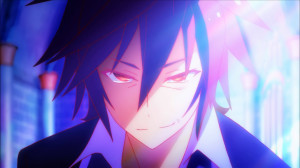 Should be fun watching the showdown against Kurami. It’s clear from this that she has some non-human magical help supporting her chase for the crown. Probably because she’ll end up giving up the territory or seriously sacrificing it to her backer. The human race is pretty much pushed into a corner and is losing badly. Probably why God went out to find Sora and Shiro. Games aren’t as much fun when one side just can’t compete. Looking forward to seeing what kind of game they have to play and how this eventual Kingship works out. I think it makes sense having Sora and Shiro just dominate the games and can leave a lot of the other royalty duties to Steph who has experience there. Anyways, this was a good episode and I enjoyed it more than the last one. Series off to a good start here.
Score: A