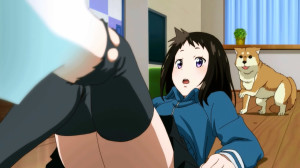 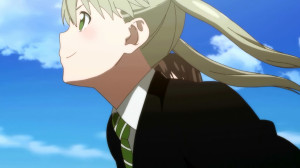 It’s pretty obvious that I’m a fan of Soul Eater in general. I enjoyed the anime for most of the way through since it really was a fun action series. And I enjoyed the manga when I decided to check that out since I wanted to see how the source material actually ended. So naturally I was looking forward to seeing how Soul Eater Not was going to turn out. Sure, it’s more of a slice of life series than the original was, but it is a spinoff so tackling things in a different way honestly makes sense. This is a great chance to dive more into the world of Soul Eater in general. Away from the main characters and the adventures they get into there is the rest of the world trying to get by.

The first episode as a whole was really solid and I expect the rest of the series will be pretty good as a whole. I’m not sure we’ll see many fights even of the school showdown type we saw in this episode. Seems like it will be a series much more focused on these new Shibusen students and how they are adapting to their new situation. It’s a pretty dramatic shift for anyone going from living a regular life to suddenly being sent all the way out to this pretty unusual place and starting to train to fight witches and basically become heroes. And well as we’ve seen some people are better suited to that than others. Pretty sure those guys we saw at the end will be pretty well dropouts unless they clean up their attitudes. 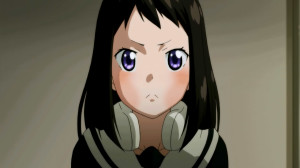 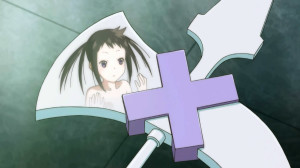 I think Tsugumi is a pretty good choice to lead this spinoff series. While the approach in Railgun can work in focusing on a popular character, there is a great deal of freedom with focusing on someone completely new. There’s no serious attachment to her right now, but there’s plenty of time to get attached to her character. Certainly if we’re taking more of a ‘regular student’ look at Shibusen and the Soul Eater world this is a good call.

Understandably Tsugumi isn’t exactly excited about what’s going on. Suddenly finding out that you’re body is also a weapon and now you’ve got to step out into a dangerous world is pretty stressful. I think the normal thought would be that it’d be preferable to just be able to go home. But in the end this is the hand she’s been dealt and I’m glad she found the courage to at least stand up to those jerks we saw at the end there. Not the easiest thing to suddenly get into a fight like that, but sometimes that’s what is necessary. 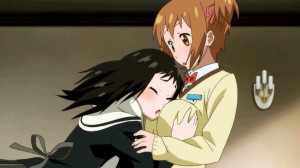 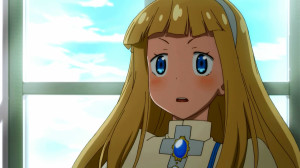 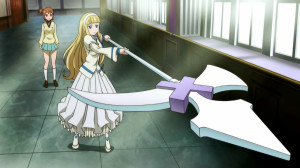 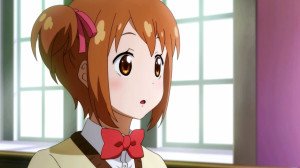 The other girls in this main trio aren’t bad characters, just rather quirky people. Anya is definitely a tsundere/oujo-sama character. Which can certainly cause problems when you are dealing with people like Tsugumi and Meme. When you play the tsundere card with people that don’t get you…well you just seem to come off cold and rude. She barely saved herself a place in that triangle situation by grabbing onto Tsugumi at the end. Still, she is a good person as we can see. Did step in to help Tsugumi and Meme against those guys and showed she’s pretty skilled. She and Tsugumi fought well together despite pretty much just meeting each other.

Meme…well that girl is a bit odd. She definitely takes absent minded to a whole new level. Not many people are going to forget who they are and where they are going within an episode and not have amnesia. Doesn’t seem like a bad person, just one that seems likely to get herself into a world of trouble. Maybe the kind of person that is going to need a reliable weapon just to keep an eye on her. 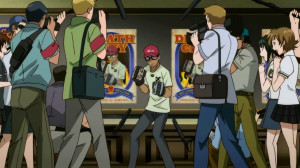 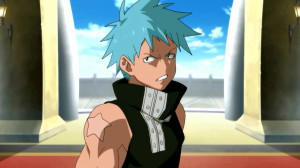 It was nice to see some familiar faces again. I’m sure that cameos won’t be that common at least for the main characters. We know pretty well how busy things end up getting for them as time goes on. Still, it was an interesting thing to see the same characters just in different art styles. This series isn’t going for the exact same feel, so it makes sense that visually the series looks different.

The little fight we had at the end of the episode was a good way to wrap things up. Despite this feeling much more slice of life, it’s still slice of life in the Soul Eater universe. If you can’t occasionally have people turning into weapons and getting into fights it’s just not right XD. Tsugumi being a halberd is a nice option since it’s similar in ways to Soul, but clearly distinct. Very much like the series itself. The music definitely worked for that scene also.

OP [monochrome] by Dancing Dolls: (A-) 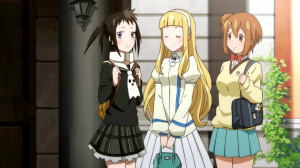 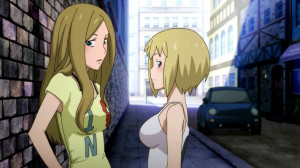 If I’d say anything about the OP it’d be that it was pretty fun. The tone was upbeat and it was over before I realized it. The song was definitely the highlight and should keep me listening to it each week. Visually it was pretty nice and focused pretty strongly on the main trio and the tricky dilemma that Tsugumi seems to be in there. Another standout was the girl with the almost scorpion-like hair that has to be a witch. Even if it’s not going to be as action packed as the main series it makes sense to have a villain around to make things interesting XD. 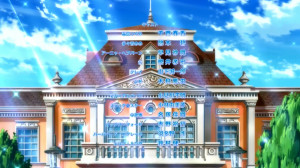 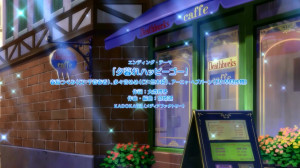 The ED wasn’t too bad in my view. As expected a calmer song, but sounded pretty nice. I think it’s usually a nice move to have the VA’s singing if they have the talent for it. Since this ED was heavily focused on the friendship between the three main girls that fits. The visuals were pretty simple focusing on each girl walking and reflecting on the friendship they all have. You can bet this situation of Tsugumi picking a meister to pair with isn’t going to be resolved any time soon. 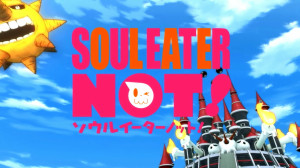 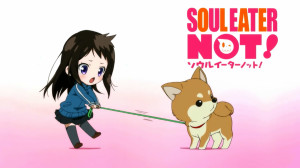 As a whole I think this was a successful first episode. It helped set the tone for the series and introduced its main cast pretty smoothly. Will just see how the story unfolds and what these girls go through as newbies in Shibusen. While I don’t think I’ll enjoy it to the same levels as the original Soul Eater series, that’s more a case of taste. Seems like it will turn out pretty well and I’m all for that. My hope still is that this series does well enough to eventually lead to the original series getting a Full Metal Alchemist: Brotherhood treatment.
Score: B+

in Soul Eater Not!