Magic and science, a location where both converge, a place that is host to a ton of individuals with unique powers and abilities. If the first thing to come to mind when hearing that specific description is Toaru Majutsu no Index, then you’re not alone. Indeed, the Toaru franchise has become a bit of a Juggernaut in recent years… So what happens when light novel author Gakuto Mikumo (Asura Cryin, Dantalian no Shoka) takes a stab at the established trope and adds vampires and the supernatural into the mix? Well, Strike Blood is definitely what occurs. 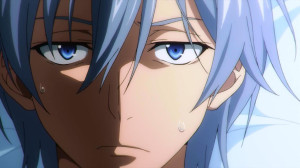 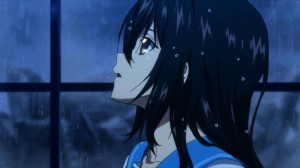 Strike the Blood actually follows Akatsuki Koujo, a young 16 year old with silver hair and a love of wearing the same hoodie outfit. Kojou is the resident of a special Island, Itogami Island, which is more commonly known as the demon district. Its on this Island, that special supernatural beings, vampires, demons e.t.c live hand in hand with humans, and are able to thrive and survive. Of course, Kojou isn’t exactly a normal human himself, and is actually a powerful vampire known as the Fourth Progenitor.

Kojou’s attempts at trying to live a normal high school life are thrown into disarray when he encounters Himiragi Yukina, a Spear Schaman for an organization known as the Lion king’s Organization. Yukina is sent to be an observer of the Fourth Progenitor, and its from there that the adventures truly begin. 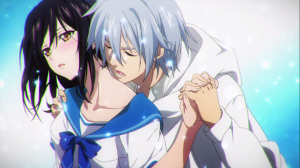 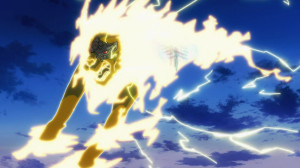 In terms of world building and plot, there are a lot of surface similarities between Strike the Blood and Toaru Majutsu no Index. There’s the whole magic and science collision stuff, and there’s Itogami Island which looks and feels a lot like Index’s Academy City. There’s even a reluctant main character who seems to be too nice for his own good, and has his own ideals of what is right and wrong. In fact, Touma and Akatsuki are pretty similar on the surface, and both seem to have harems of sort without really intending it.

The similarities end there though, and Strike the Blood takes some very interesting turns and approaches to the subject matter. First of course, is Akatsuki. Unlike Touma, Akatsuki is actually a bit more straightforward and believable as a 16 year old teenager. Unlike say Touma, Akatsuki has a pretty deep interest in his love interest, is more apparent about his intentions. 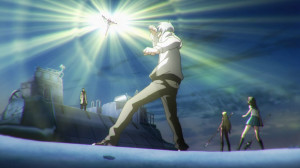 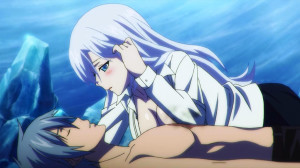 Whats more, Akatsuki isn’t like Touma, a cool heroic character on the sidelines who ends up saving the day. Instead, Akatsuki and the fact that he’s the Fourth Progenitor shapes the world and people around him. He’s actually a key player in the status quo of the world he inhabits, whether he likes it or not.

The series itself tilts a bit more in the direction of romance/harem show, but there’s definitely tons of action, fun storytelling and a rich mythos to support it all. Perhaps the best way to describe Strike the Blood is that its the love child of Toaru Majutsu no Index and Campione!. Its an odd combination for sure, but one that works quite nicely. 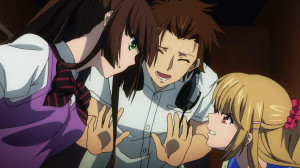 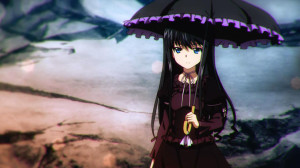 The reason why the series works so well is that the details of its world and the cast of characters are definitely unique. Strike the Blood doesn’t reinvent the wheel, but it never the less adds enough twists to the established formula to be  entertaining.

The series adapts various arcs in chunks of around 3-4 episodes. This works fairly well now that the series can be bulked watched, since the cliffhangers in between arcs can be quite painful. The pacing isn’t bad per say, its often that the episodes will just end at very crucial scenes, only for the next episode to pick it up and resolve it. There’s almost always a case of “Wait, its over?”, which is a compliment that very few anime can get. 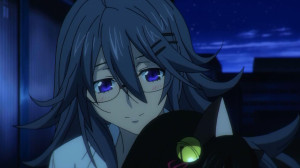 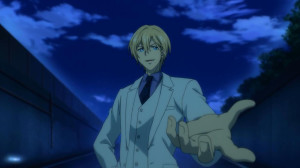 The story as a whole, serves as a great introduction to the cast of characters, the world they inhabit and paints a pretty detailed picture of where things are going from here. The ending arc, which only spans 2 episodes, is actually a nice and clever way to end the series, as it really gives the Akatsuki and Yukina character dynamic and arc some closure, while giving a pretty cool preview of what might happen in the future.

Again, this is a series that still has its source material running, but it does a good job of resolving the story to the point where it ends. A continuation, would definitely be a sequel in the truest sense (and anyone who watches the series will definitely want one). 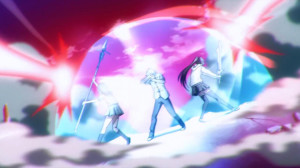 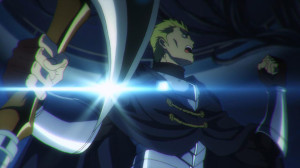 Studio Silver link does a pretty good job on the production side of things. The production is mostly kept consistent, and definitely looks like a slightly less flashier version of something J.C Staff would do. There’s a good mix of special effects, action scenes and more low key scenes that are handled competently.

Sound work is also pretty good, with a nice jrock/trance sound track acompanying a more traditonal Jpop OP/ED set. The Seiyuu do a great job as well, which is more or less expected these days. All in all, the production for the series, while not really something that stands out, is well done none the less. 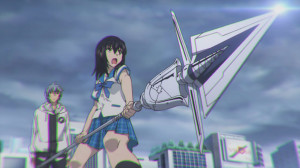 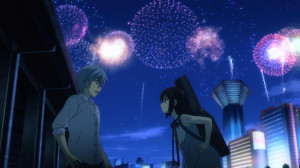 If there’s one flaw that Strike the Blood has, if you could call it that, its that it really isn’t exceptional nor does it stand out. The series is fun, entertaining, and plays within tropes established by other Light novel adaptions of its type (Toaru Index, Camione!), but it never veers into the level of extraordinary. Does every show need to be extraordinary? That’s for each individual to decide themselves.

In many ways, if nothing else, Strike the Blood is another unique, magic/supernatural light novel world that’s fun to get lost in. Its not amazing, nor will you loose sleep over it, but you’ll enjoy it while you watch it. Its easy to call Strike the Blood a good tide over till the next Index series, but we’d say it carves enough of a distinct niche for itself that it can stand out on its own. We award it a B+ grade.