Its no secret that the Winter 2014 season has been one of few standout series and a decent amount of disappointments. Its kind of surprising, ironic even? That a series like Noragami is one of the suprise sleeper hits of the season. What makes Noragami such a strange and wonderful case is how the series never tends to stray too far from established Anime storytelling and plot conventions, yet manages to handle every aspect of the execution with a competency that few can match. 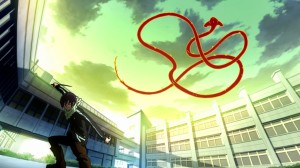 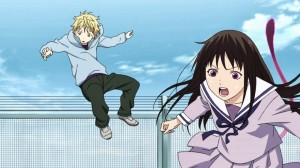 Norgami uses the increasingly popular subject matter of Japan’s Kami (gods/dieties) and their relationship with humans, Ayakashi (demons/phantoms) and human wishes as its canvas. At the heart of the series though, is the tale of Yato the 5-yen wish granting god, his “sekki” Yukine and their human friend Hiyori. Like many great series before it, Noragami proves that you can have a great experience when you let the characters drive the plot. It also helps that said characters are extremely likable, well developed and generally interesting.

The 12 episode series run focuses on the introduction of the main cast proper, and goes through what is the first major arc of the source manga, the Yukine arc. While the story’s plot itself won’t surprise or bring anything truly original forward, its a heartfelt story nonetheless. One that truly touches the very core of caring for one’s friends and familial relationships. And of course, since we’re dealing with Kami and humans, there’s a pretty unique and original take on the whole “what it means to live, and what it means to wish and hope” idea. 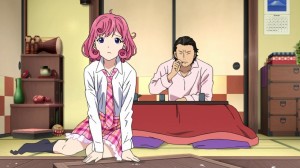 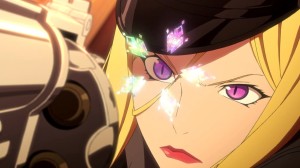 Again, it really is the characters and their relationships that drive the story. Yukine is a large focus of the series, as he slowly comes to terms with the hand that he’s been dealt with, both in life and after coming back as a “tool/weapon” of a Kami. His relationship with his master and savior Yato is the real emotional pivot that the series balances on. Its Yukine’s character arc that, while pretty standard fare, is developed with such care and expert craftsmanship that its a true joy to watch. 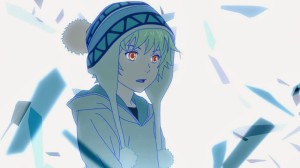 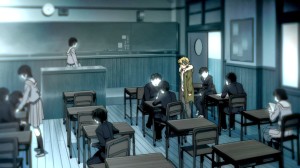 Yato himself has his own dark past to contend with, one that seems to continue to both haunt him, and bring misfortune to the people around him. Hiyori meanwhile, handles her own introduction into this strang new world of Kami, Sekki and ayakashi. There’s also a sort of romantic tension between Yato and Hiyori that subtly thrown into the background of everything else. Its all the good stuff, the stuff that fans of traditional japanese culture based stories will like. There’s some Rurouini Kenshin here and even a good mix of Natsume Yujinchou there alongside Noragami’s own unique flavor.

Where Noragami definitely sets itself apart from the rest though, is in how it deals with its larger subject matter in shades of gray. Its hard to find fault with a certain character for the hard events that transpire at the series darkest moments, and its easy to hate the life/death system that the series takes a good deal of care to establish in its world building. Its a testament to how well done the world building is, that the way things are feel really unfair at times, and great at others, mirroring real life quite nicely. 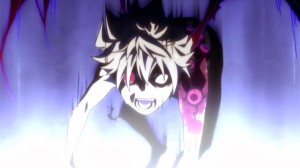 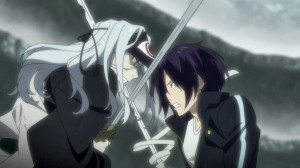 And while the series deals with some pretty dark and depressing subject matter at times (especially near the end), there’s a good mix of humor and light hearted moments that are thrown into the mix. The balance between comedy and darkness is something that very few series can do well, and Noragami is one of the proud members of that particular club.

And while its an enjoyable and arguably consistently great ride throughout, its worth noting the end of the journey. Yes, Noragami is another 12 episode series that actually ends long before its source manga is done telling its story, and thus has to settle for an artificial, anime original ending. From an anime only viewer perspective, the last three episodes are tonally consistent with what the series has taken care to establish. There’s emotion to be had from the finale, and while there are lingering questions, the anime stops at a point that doesn’t feel painful. Is it a conclusive ending? No… But what makes Noragami’s ending palatable is that it exits with grace, with potential openings for a continuation. 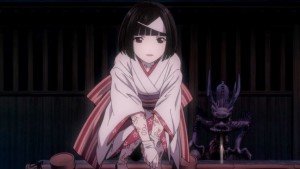 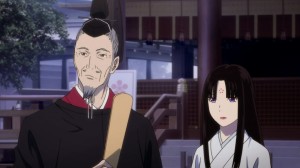 From the production side of things, its Studio BONES delivering in the consistent and high quality way that they only can. The art, animation and generally consistent quality of the visuals holds up throughout the series. The action in this series, one full of cool sword fights, battles with weird monsters and flashey spirit based effects is definitely competent and well done. Its not reaching J.C Staff levels of cool, but Studio BONES does an amazing slick, smooth and stylish job of crafting a very unique world and distinct characters.

The seiyuu definitely do an amazing job in the series. Jun Fukuyama delivers yet ANOTHER stellar performance that only adds to the growing list of memorable and A-list characters that the man has voiced. Maaya Uchida does a great job as Hiyori, providing a very feminine, cute yet strong willed character to her performance. Even Yuki Kaji (the seiyuu that anime fans love to hate) makes for a very awesome and likable teenage Yukine. While its easy to take great seiyuu work for granted, as nearly every show these days has great voice work, its definitely worth noting that the strong performanced by the entire seiyuu cast elevate Noragami a step above the rest. 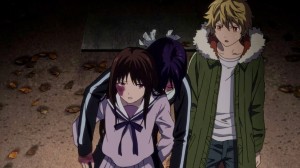 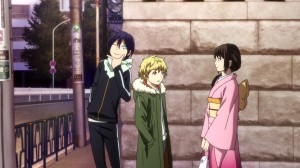 Noragami also features a very nice soundtrack, with a sound track that mixes japanese rap, funk and traditional folk tunes with rock to create a unique blend of music that is distinctly the series’ own. Kudos to the Sound director as well, as we get a very cool set of tunes that accentuate the great moments in the story. The OP/ED set for the series is also pretty great, with the OP done by Hello Sleepwalkers being particularly memorable.

As we approach the end of another season of anime, its easy to see Noragami as one of those series that is easy to recommend to most. Its an entertaining, consistently great series that tackles some interesting subject matter while following traditional anime plot devices to great effect. The ending will probably make fans want more, but it does a decent job of providing some closure to its viewers. We award this sleeper hit of a series with an A grade.