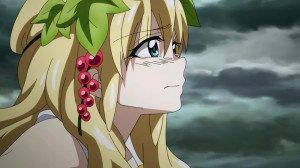 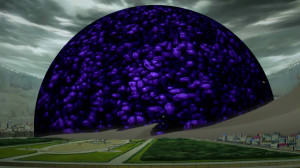 Well holy crap. While I don’t think the initial cool factor of Alibaba’s Full Djinn Equip could be surpassed the end of this episode was pretty epic and full of impact. I mean geeze, that kind of scene was unexpected to me and things in a sense have only gotten worse after that sacrifice. If Aladdin and the others can’t stop that thing (and I do mean thing) from descending then everything could end.

We always knew the worst case scenario was likely to happen and here it is. Maybe hte most surprising scene was the reaction from the members of Al Thamen and especially Hakuryuu’s mother. She was in complete dark mode there cheering and crying from joy at what was going on here. Clearly this person is seriously warped and I really wonder all the more about her background. Funny that they handed the tools to the people of Magnorstadt and on their own they unleashed this hell. This is on Mogamett who had no idea what he was messing with and in the end it might have cost the world everything. 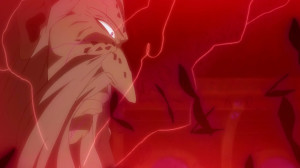 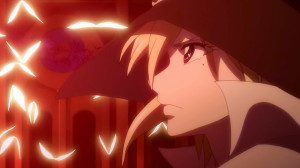 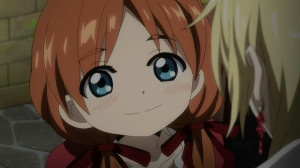 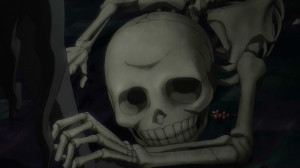 The huge moment for the episode was of course the sacrifice of Titus. His character has really had a nice arc that I probably haven’t talked about enough. Realizing that he has no time and there is no hope obviously put him in a terrible spot. People who have lived a long time would struggle with that realization. But Titus has only had a year in the world and now boom it’s times up. He’s only starting to realize who matters to him in this world and he’s got so little time to decide where his loyalties should be. Probably is a case where he cares too much about too many people and can’t easily prioritize when they are on different sides of the fence.

Marga truly showed her worth in this one. Probably the one person who showed just how off Mogamett’s views were. Despite all he had done to the people in that district Marga still had the strength of spirit and wisdom to support Titus in his low moment. Maybe being in such hell and knowing she had little time also made her more able to put her life on the line when it really mattered. Living in a sparkling world is important enough to risk a lot.

All that lead to Titus doing what everyone should have been trying to do, go straight after Mogamett. I mean seriously the Kou Empire had things under control, Alibaba and Aladdin should have been speeding off to cut off the source of this. Regardless the sacrifice Titus made was really touching. He did everything he could to stop the Director because he did care about him, but also wanted to protect the people of the 5th District that were going to be killed at this rate. He wanted to save everyone he could and sacrificed himself to make that happen. The sad thing being that it just seemed to feed that furnace and instead of the district being killed to summon that monster it was just Titus and Mogamett alone. Though I think Mogamett completely deserved it. He had a sad and tragic past, but it doesn’t excuse what he’s been doing for all these years. 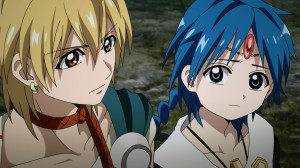 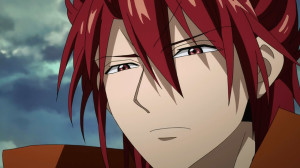 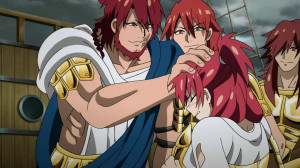 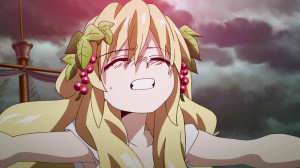 Another interesting part was Alibaba vs. Ren Kouen. Sadly it was a bit more of a loss for Alibaba, but one that was necessary to avoid a fight with Kou here and now. Plus I can understand his wish not to stand down against this guy. The guy directly connected to the situation in Balbadd which is a very important place for him. Of course it wasn’t a complete lie that they came there to support Kouha. They knew the Dark Djinns were going to be attacking Kou and did head that way to help them out. In the end the results did match the story so it was really just a matter of interpretation at that point.

Of course Leam was having their own struggles. The further Mogamett got into that darkness the more Dark Djinns he was sending everywhere. It was a very bad situation of course since Leam was exhausted from that battle and didn’t have nearly as much firepower with them as the Kou Empire had. Still Scheherazade did everything she could along with Mu and the other Fanalis. It’s sad to think that she’s nearing her end even though she’s had quite the run. Just a nice little scene when the Fanalis corps stepped forward to support her for one last effort to protect Leam’s people. The little chat with Myron just a reminder that everyone has their priorities and what really matters to them. The hardest thing being not to be sure what really is most precious. 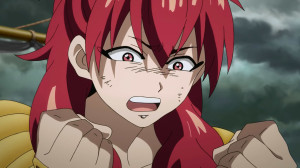 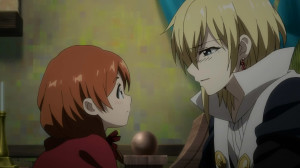 We’re now really in the climax of the series now. Going to be a major battle for everyone to fight back and stop that dark mass from ending everything. I’m sure they’ll find a way to stop it, but still wonder about the consequences. Titus is gone, Marga is kind of stuck down there, and Kou might be content after having saved the day to press forward and still conquer Magnostadt. And….we still haven’t seen Morgiana! Seriously, someone drop her in here and let’s get the trio back together.
Score: A+