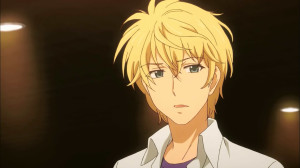 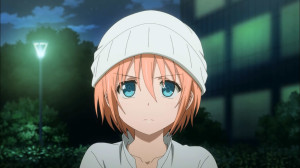 I still think it’s somewhat strange that only now are we tackling this business of Banri telling his friends about his past, but oh well. Considering he hasn’t it’s about time he does. I know it’s a bit tough for Banri to bring up, but he’s really reaching the point where misunderstandings are just going to crop up because he doesn’t say anything. Just like not telling Kouko lead to problems earlier in the series. Really just has to carefully bring up the amnesia bit and mention that Linda was a childhood friend.

While I feel like Oka went a bit far, that’s only because I have the full picture. For Chinami it was a pretty serious and suspicious circumstance she found Banri in. It’s all the more charged for Chinami because she clearly still has feelings for Mitsuo and she’s become so much closer to Kouko. A good friend’s boyfriend is acting suspiciously so of course she was going to get pissed off. I struggle not to say it’s not a big deal so he should just talk about it, but talking about his past is usually a big deal for Banri. 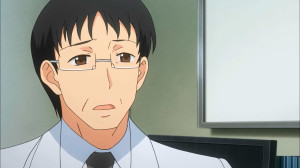 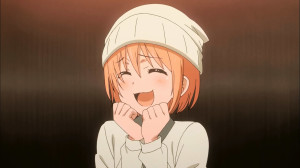 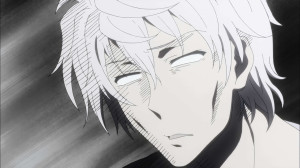 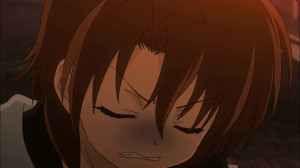 I have to say that doctor at the beginning must have been thinking “oh this guy’s nuts.” Kind of funny that this is the only time Banri thinks of going to talk to a doctor of some sort. All the weird things that happened and it’s seeing the past self falling to his death that made him think this was something worth investigating. Regardless I really hope this means the death of Ghost Banri. Probably not since it’s just never that easy. Would be nice if that other Banri could just accept the reality and let the past be.

Another unusual thing was Chinami cutting her hair. Honestly I think it was better long, but oh well. I’m rarely a fan of the whole cutting hair thing since characters rarely look better for it. Maybe can treat it like the Mitsuo situation. Both responding to losing their chance (or perceiving to have lost their chance) with someone and taking drastic steps to change. Just for Chinami she cut her hair. Does make her look a bit too much like a guy, but that’s her call I suppose.

Mitsuo following Linda to the Festival Club was funny. Almost as funny as Linda being so pissed off that Banri and Kouko didn’t say anything. It was nice to get a view of what was going on with her and Mitsuo. A case of the guy getting interested in her and trying to spend more time with her only to have Linda being unsettled by it. I suppose losing past Banri really shook her up emotionally and when it comes to relationships. Less than eager to jump into anything with Mitsuo, but clearly unable to ignore him. 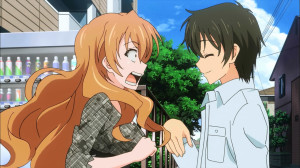 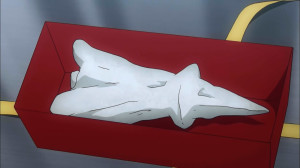 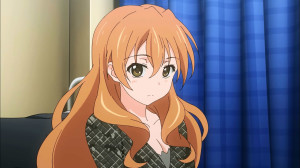 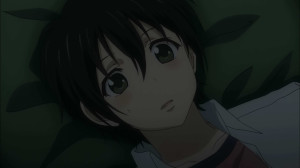 Suppose one can’t just ignore the whole…bungled event with Banri and Kouko. I suppose it would be tough for the series to actually have something happen with them. Probably would be more than they are willing to hint at. Does show Kouko willing to take things to the next level there. Nothing wrong with her wanting to have sex and it was a cute gesture to create that….Eiffel Tower to reflect the promise she made before. Too bad they had to cut it off by forcing Kouko to be a bit ill from overeating XD.

I’m always glad though for the scenes showing how those two feel about each other. Did put a pause on things, but shows how important each of them have become. For Kouko Banri really lets her be herself and continue to develop as a person. Banri really has needed the place to call home that Kouko gives. A place for this mix up Banri to be himself as he works things out and pulls the multiple aspects of himself together. It has been nice and while I’m sure trials are still ahead it’s a bit of a comfort to feel like these two will be fine at the end of the series. 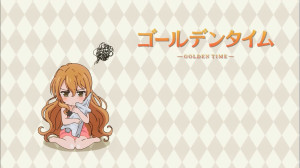 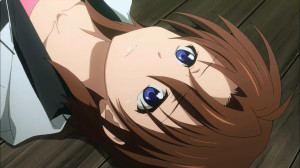 The ending did make clear that something has to be done now. Banri just can’t get by holding back his secrets. Maybe he feels like telling the whole story will be really exposing himself and making a part of himself really give up on Linda. Sometimes secrets are just what people need to get by and sometimes they have to be destroyed and removed from the equation. Banri’s friendships are really going to suffer if he can’t bring himself to talk about things and let others in. Just sit everyone down and clear everything up.
Score: A-