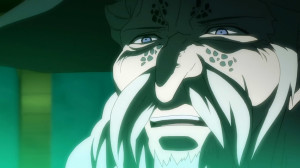 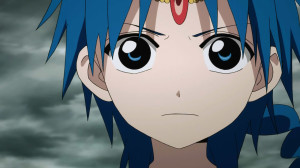 And the war begins in a big way. Sadly couldn’t get to this episode until now, but it was definitely worth waiting to watch. Just getting to see both sides in this conflict really show off what they were capable of. Though I’m pretty sure they’ve both got more to give. The question will be whether or not Aladdin is capable of resolving this conflict before it becomes any bigger than it already is. With countries like Kou ready to act…it definitely could get worse.

It was interesting to see what was not only a battle but a look at the differences between the societies of Leam and Magnostadt. Two countries with very different perspectives on things. It was pretty fun going back and forth between Mogamett and Scheherazade. Both very confident and strongly believing in what they see as right. Both had their chances to be confident and both had times when things didn’t quite go too well for them. The action did take center stage, but the politics were interesting. 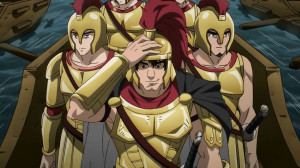 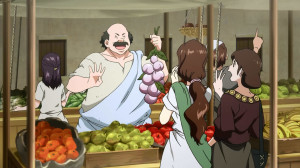 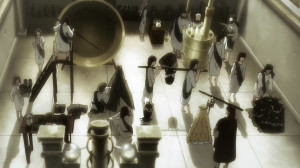 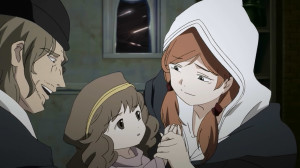 Neither country here is an ideal nation that’s for sure. Both have their negatives and some negatives are worse than others. This episode though did bring up the Leam Empire in my view. It’s a country that does have a lot of work to be done to really improve. The slavery side of things isn’t great and the blood sports is questionable. But at the same time the core of it is something that has a lot of potential. I definitely prefer the mindset of having some faith in the people and working on different ways to improve. Even though Scheherazade is a major part of the country she’s hardly against the development of science and tries to rely as little on the metal vessels as possible. She really does seem to have a lot of faith in the people of Leam. Mistakes can be made, but even still people have the ability to improve if they just keep moving forward. That’s the kind of mindset I think is worth supporting.

In some ways I feel like Leam is the most relateble to our own world. Obviously the Roman similarities is there, but it just seems to be moving on the right track. They are working on their science and trying to create a people who are strong and able to stand on their own two feet without relying on super powered beings. Certainly different from Magnostadt. But also in some ways different from Sindria. I can just visualize this country getting its act together and eventually reaching a much better nation. It just made me smile a bit and seemed like a country that could really become something great.

On the other hand with Magnostadt I really wonder how things are going to turn out. The weak points of their system were definitely apparent in this episode. The second a crisis breaks out the people in that nation crumble. They are so dependent on the magicians who rule them that they can’t think for themselves and don’t even bother trying. The magicians are elite and talented and maybe they can support a lot of the burden, but that’s a country that I just don’t like. A country that treats its people like cattle while turning them into sheep. It’s just sad to look at. 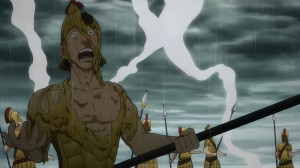 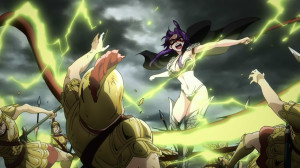 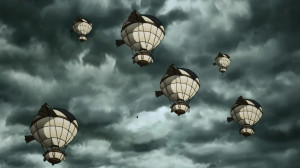 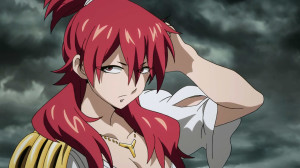 The war itself was pretty damn awesome. I mean the magicians pulled off some great attacks and really did a ton of damage. They are definitely more than a match for the foot soldiers of the Leam Empire. Of course they do have limitations and numbers can sometimes win out in the end. Still I’d hate to be a solider out there dodging acid rain or getting smoked by lightning. There is no doubt that they would be really believed in even if they weren’t treating their normal citizens like slaves. It was pretty terrifying to see the results of their magical weapons. Just pure annihilation from those things. Of course they require practically killing all their normal citizens, but the results still speak for themselves.

The Leam army wasn’t to be outdone though. They did show pretty damn good resolve considering what fantastic things were being used against them. A very well trained and confident army. They also had some good tech advantages. The ‘airships’ were pretty cool but also was the amount of explosives they could throw into a battle. The results there could have been pretty devastating as well. Leam already has access to artillery, more or less.

Though maybe the biggest advantage for Leam would be the Fanalis Corp. I mean damn they are pretty awesome. They can just rush out there and annihilate anything that gets in their way. They could even stand up to that crazy cannon that Magnostadt was using. As we’ve seen the Fanalis are pretty damn powerful and you create a small army of them….damn. Certainly a tribe that can get pretty hooked on battle and lose themselves. It was hilarious seeing Mu’s sister trying to act so mature and relaxed, but when she got into fighting she was as wild as anyone else. A pretty damn cool character. Mu had a good little fight against Titus, though his actions were more of a mental attack than a physical one. 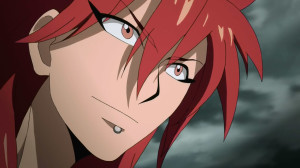 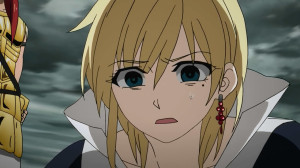 Of course Titus is the key in all of this. He’s really struggling with himself and the reality of his situation. How could he deny his fears when Mu threw them in his face? He had found people worth living for and it was hard for him to give that up. I don’t know what he’ll do in the end or even what he can do. Titus’s situation is just very sad and the potential for tragedy is really there.

What did save him in the end though was Aladdin. He can accept Titus and remind him that there are people who will consider him their friend. Even being one of the most unusual and different people in the world doesn’t change that. Also I’m pretty damn glad Aladdin actually did something. Was worried he was going to fight against Leam since really that’s a questionable move. At least in the end he did attack that pipeline so they couldn’t just kill the people in the 5th district by overusing their weapons. I kind of wonder what he hopes to accomplish in the end though. Going to be hard to just end this war. Though it’s probably a good idea since the longer this goes on the worse it could get if Kou decides to jump into it. 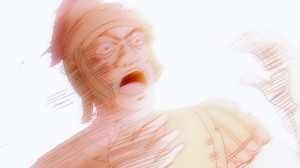 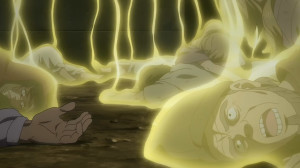 As a whole it was a great episode. The action was worth watching and the back and forth between two major powers in the world was good. I’m looking forward to seeing what happens and maybe even seeing Alibaba. He is supposed to be around here somewhere after all XD.
Score: A+