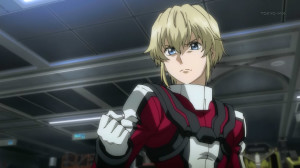 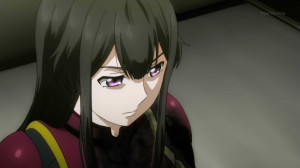 Sometimes you really do need a chance to step back and take in your situation. This was a good chance for Aoba who really has been rushing from battle to battle without a chance to breathe and really consider what his situation is here. Though unfortunately a chance to think means a chance to really suffer, but it was necessary for him in order to have any idea how to move forward.

I do have to give my condolences to Hina. Get thrown into the brig because a guy comes onto you XD. Certainly I can see why there’d be some suspicion around her, but it’s not like she’s a complete nobody. Plus you’d think shooting at the guy would help dispel come concerns. Of course there is reason to worry since Hina is bound to betray them or at least fall for Aoba sometime in the future. They are just being a bit premature about it. Sucks for Aoba as well since I suspect she’s going to be rather pissed about the whole sent to the brig thing XD. I’ll just tell Bizon to give it up now, not going to work out for him. 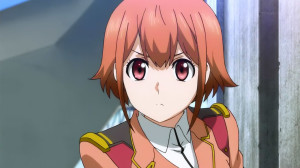 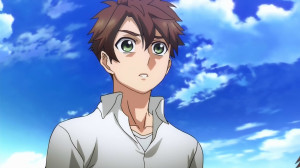 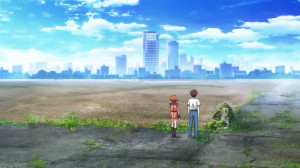 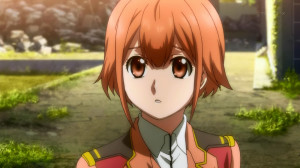 Of course people who it’s not going to work out for are popping up left and right. I feel for Mayuka who really is a cute character. She accompanies Aoba through a pretty darn rough tour around his hometown. Got to see head on how Aoba isn’t making this stuff up and is honestly shaken up by the reality of his situation. Honestly just a nice character who really did all she could to show him around and in a sense saved his life. If she hadn’t given him the push he needed to stay on that ship they would have killed him to prevent intel from leaking out….not that Mayuka or anyone else really knew that. The easiest death to cover up is the death of someone society doesn’t recognize as existing. Anyways I feel for her since she does seem to have a thing for Aoba, but he was way too distracted by everything to see that.

It was good to have a guide since that was a pretty serious shock for Aoba seeing how just about nothing remained from his time. Of course makes sense that time passes, but actually facing that is something else. The house that he grew up in isn’t there, the school is shut down, etc. Of course was unlikely relatives still lived in his old house, but I don’t blame him for being surprised it was gone entirely. I suppose there is some hope to finding relatives, but not easily done right now. Even if he can find someone like his sister the shock will be as bad for her as it will be for him to meet her.

Right now Aoba just needs something to hang onto. I can’t blame him for being so focused on Hina since while she’s from the future too she’s at least some sort of link to his past. He can associate her with that time because she did live there for some months. Though this Hina and that one aren’t the same person yet. Being called a savior by Lee or Mayuka might feel a bit cheesy but it’s also pretty important for Aoba. These people need him. They might need him to fight but they are the only people on the planet right now that actually know him and need him and that’s a powerful thing. Out of all the reasons that we’ve seen random civilians get pulled into wars this at least made sense. Aoba has nowhere to go and this place gives him the best option to try and reach out to Hina. 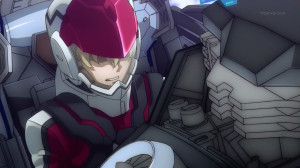 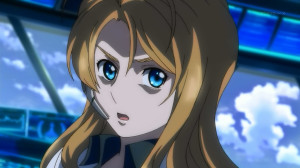 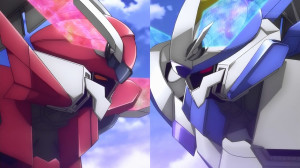 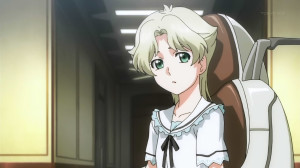 We did need a chance to develop Dio a bit and this seems to be starting that. Honestly I’m amazed they got through the coupling in the previous episodes before running into this problem. Not like Dio had full faith in this mysterious person he only just met. I guess it shows how strong their match is that it took that level of distrust and dislike in order to mess up the coupling. Not that I can really blame Dio. He did go through that tough experience with decoupling and appears to come from a really strict family. The more prestigious you are the more pressure that is probably thrown on you. The father seems like the cliche tough parent who doesn’t have much sense. Yeah, sorry Dio wasted his time saving your life. Will try not to make the same mistake next time…

Can’t say much about Dio’s little sister except she’s probably going to be another casualty of what is becoming harem Aoba XD. At least it’s not getting too carried away. That doctor seems pretty into the Lee pilot and that other bridge girl seems focused on Dio so they aren’t going too far into harem territory.

The battle again was solid enough. It wasn’t too amazing this week since they were just facing a pack of grunts that weren’t anything special. They were just a tool for this friendship between Dio and Aoba to really start forming. Seems likely the main enemies will catch up with them next week and those battles should be pretty good. Makes me wonder what they are going to do since the coupling system is so overwhelmingly powerful. Long as there isn’t personal issues on the other side they can’t be easily stopped unless they hit the time limit. 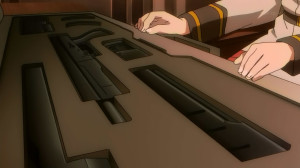 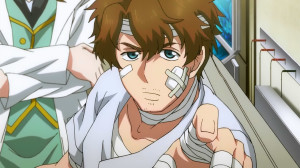 I’d say this was a good character building episode. The battles can’t be the only thing going on every episode. We needed this chance to really settle Aoba into the future and start getting to know the other characters a bit more. After all without this episode we’d never have known that Mayuka is terrible at tailing people XD.That and an interesting possibility that Dio and Aoba might be related. If Dio’s father looks like Aoba’s father there could be a connection. It might explain why they are so compatible. Plus if Aoba’s sister married into this family it’d explain why it was difficult to locate her. Her maiden name might not have held up in historical records that well. Could be something to keep an eye on.
Score: A