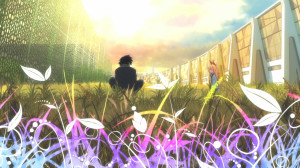 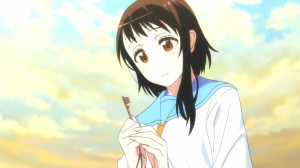 There are some series that are really hard to write about. As you’d expect, good series are fun and easy to write about. There’s tons to praise, speculate and analyze. Bad series are actually fair game too, since there’s enough to rant and rave against that it makes for a good time. No, the hard series are the ones that are just… okay. Not great, not horrible, just okay. And while Nisekoi, isn’t that, its another series that could’ve been great but ends up falling short, and thus falls into the “meh” category anyway.

There’s notable problems to be sure, but I think the worst strike for this series in my eyes is the pairing of the source material with animation studio SHAFT. Now lets be clear, I love SHAFT, and some of my favorite shows have come out from them. What makes SHAFT such an interesting studio is their specific style, and more so their sort of style over substance mentality that seems to work most of the time. If you’ve ever seen any of the Monogatari series, Dance in the Vampire Bund or even Arakawa under the Bridge you’ll have a good idea of what I mean.

The issue is that SHAFT’s unique animation and visual style only works with certain types of series. The lack of frames, the sudden close ups and dramatic angles work for a series like Monogatari because its very dialogue based. The visuals are added flavor, not the meat and potatoes of the experience. Arakawa under the bridge is similarly, all about the comedy and eccentric characters and equally as bizzare.

Nisekoi is just a story that doesn’t fit, and on it own it could’ve been at least a good B+ grade series. The premise, much like Mikakunin de Shinkoukei is what got me interested in the first place. In essence, the high schooler son (Raku Ichijou) of a Yakuza boss ends up having to date the daughter of a rival gang leader’s daughter who he has no chemistry with or interest in. To sweeten the pot, there’s another girl who he made a promise to as a child, that seems to be hanging around him and is clearly interested in him. BUT! In order to prevent all out gang war, Raku has to continue to pretend to date this girl he clearly doesn’t jive with.

The concept, is novel. There’s ways this could play it. We could have a Nyan Koi! styled harem comedy, which was immediately what I thought of when I saw the series premise and promo art. Or you could do a straight up romance drama too. What this series does not yield well to is SHAFT’s brand of eccentric flash.

To harp on for a bit… On its own, I think Nisekoi would’ve done fine, but paired with the rather distracting visual style, the odd pacing and dramatic dialogue exposition, it just all feels wrong. Worse still, it feels boring in some parts.

I get that the premise and story in general yield themselves to the “its predictable but the journey is what’s important” mentality, but how its executed just… doesn’t work for me.

The characters are all stuff we’ve seen before. Raku’s the poor guy who’s nice and firm in his convictions, but too nice for his own good. Chitoge’s another mild tsundere character and Kosaki is the main character’s crush that’s nice but shy and seems to have the odds against her.

Generally the episode established Raku’s promise with a girl when he was a kid. He’s left with a rather fancy looking locket, that has a lock in it, with the girl holding onto the key. Now, it seems that Raku is the sort of senitmental guy that holds on to such a promise.

There’s hinting in this episode that Kosaki might actually have the key to the locket, but I’m sure there’s bound to be more to it than that. Added to that is Raku’s interactions with Chitoge, a half japanese half american girl that happens to be the daughter of a rival Yakuza gang boss.

Chitoge’s okay, I mean, generally its the tsundere type characters that end up having the most chemistry with the main character in these kind of shows (i.e Eri in School Rumble, Kanako in Nya Koi e.t.c), but she honestly doesn’t have any. Instead, all she does is keep brutally beating up Raku, in classic Love Hina fashion, except that he rarely, if ever, even remotely deserves it.

Their first meeting results in Raku losing his locket, and Chitoge despite acting like quite the jerk, acts all tsundere and ends up finding it for him anyway. Raku, throughout the ordeal, is fairly nice to her until she questions his whole sentamentalism with regards to the locket, which sets even him off. As it should.

The episode ends on the classic “the girl you have to date is the one that gave you hell just moments before” punchline. Fairly standard fair as far as these type of shows are concerned.

The Yakuza angle could’ve made this show interesting, but its honestly kind left in the background to SHAFT’s usual visual tricks and close ups.

Now it seems like I’m being awfully hard on Nisekoi, and its because this is a series that I would generally like. It seems to follow the standard harem anime conventions, but its got enough of a unique twist to set itself at least somewhat apart. Yet, there’s the humor that is hit or miss (with the miss happening too often). Its predictable, and then it still insists on a super slow pacing and dramtic build up for each reveal that you’ll see coming minutes earlier.

In the end, I think this is an issue of not respecting the source material enough, or at the very least, not getting an appropriate studio and director to handle this show. I’m not going to write off Nisekoi completely just yet, because there is some potential in the show’s premise, but I will say this… It didn’t make a great first impression.

The three episode rule will have to tell me if I want to keep watching this series, so I guess that’s strike one.